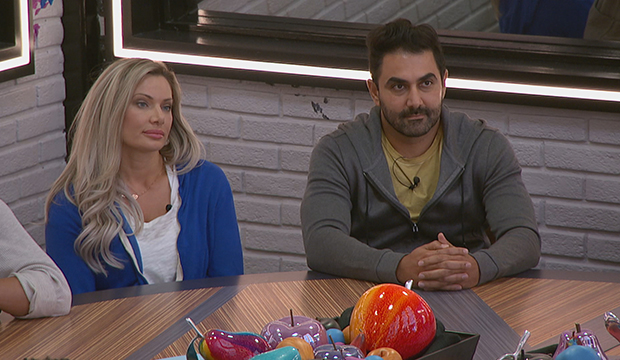 To the shock of absolutely no one, Cody Calafiore did not use the Veto on Monday on “Big Brother 22: All-Stars,” so the Janelle Pierzina and Kaysar Ridha reunion tour will come to an end on Thursday. They both got to work campaigning, but soon discovered how impossible Nicole Anthony has made it for them.

They’re not idiots; they both knew they’d be targets before they stepped foot into that house and knew they would be an even bigger one when they saw each other in there. But really, Nicole A. getting brainwashed, led by Kevin Campbell, and trashing Jaysar with the house for an entire week destroyed their game to the point of no return.

“They literally think we’re the devil and we ruined her life,” Kaysar told Janelle.

“She completely ruined our game, trashed it,” Janelle said.

“She did. She completely set it on fire and walked out of this house,” Kaysar agreed.

“As we were trying to get votes for her to stay,” Janelle noted.

Janelle: I think Nicole Anthony's crazy.
Kaysar: No, she had a mental breakdown.
J: She ruined our game, trashed it.
K: She set it on fire & walked out of this house. She came back too soon
J: I was fine
K: You're different…she's on the spectrum. She operates differently. #bb22 pic.twitter.com/Zd5UsT4rBQ

SEE ‘Big Brother 22’ spoilers: Cody does not use the Veto

Jaysar, whose reads are 100 percent more accurate than Kevin’s, correctly identified him as the culprit who “poisoned” Nicole A. “Kevin most likely got to her and poisoned her brain,” Janelle said. “She loses it and spreads all sorts of information to everyone, and everyone hates us. Here we are.”

“He has no idea what the hell is happening. It’s like conspiracy theories. Completely wrong every time,” Kaysar added.

“He is good at sneaking around, gossiping and exchanging information,” Janelle pointed out.

Where is the lie? Too bad they were in the dark last week, not that that would’ve really helped them this week. Janelle knows she’s the target and is trying to collect six votes, telling people she’ll always be the target if she stays, but while they all entertain her, no one is truly committing. Her only other ally in the house is Bayleigh Dayton, who later told Da’Vonne Rogers she probably won’t vote for Janelle so as to not stick her neck out. Dani Briones said she’ll “consider” voting for Janelle if she’s able to rally five votes, but we all know she won’t. Kevin told her he’ll vote to keep her, but who knows what’s going on inside his head. He also kept badgering Janelle to reveal who she’s targeting, and she would only say the other side of the house. Girlfriend ain’t dumb, Kev. She had also told Kaysar earlier that she would put up Kevin and Nicole Franzel.

The absolute worst convo was her one with David Alexander, who continues to validate everything Memphis Garrett said about him last week. Dude’s social game is atrocious. It’s totally fine not to give away information, but you gotta meet people halfway somehow — whether it’s lying, telling them what they want to hear, proposing your own terms, etc. — but he comes off stone-faced, dense and weirdly hostile. Janelle told him she’ll “100 percent” be loyal to him, and this genius replied with, “There is no historical reference to make me think that is true.” Um, actually there is; it’s called Season 6, Season 7 and Season 14. This is one of the most loyal players ever. There’s no “historical reference” for you because you’ve never seen the show.

SEE ‘Big Brother 22’ spoilers: Bayleigh tries to go to bat for Janelle, but Dani is a rat

Kaysar didn’t do as much campaigning. He’s totally willing to flip the votes so Janelle can stay, but she has encouraged him to campaign for himself. Most houseguests have been avoiding him, though, and he told Day that he’s trying to “regroup” before he fully campaigns. He said that returning after 15 years to play with Janelle is “special” and he knows it’s not going to happen again. Let’s all pause to cry.

(3/4) Da'Vonne checks in with Kaysar
Kaysar: Part of my disappointment is, for me, coming back after all this time and to be able to play with that woman is special. Like, this is it. This will never happen again, and it comes to an end this week. And it sucks. #bb22 pic.twitter.com/qyGNrKxl7E

Meanwhile, Bayleigh locked in Tyler Crispen as her “No. 1 boy” (insert “Succession” GIF here), which brings Tyler’s final two deals to about 24. He seemed to just go along with it, so we’ll see how he handles all of them later. The majority alliance is enjoying their “easy” week so much that they’re already outlining the next couple of evictions. Cody wants Kaysar, Day and then Kevin to go. Dani and Nicole want Day and Bay to go next. See if you can sense the theme here. This house needs a shakeup badly.