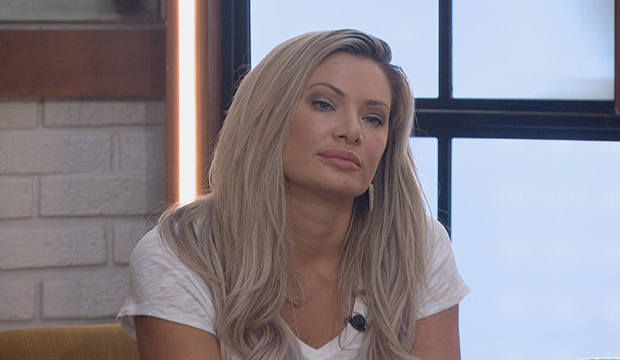 After one week of barely any campaigning from the nominees and last week’s catastrophe, it’s nice to see some actual fight this week on “Big Brother 22: All-Stars.” Alas, it’ll all be for naught in Janelle Pierzina‘s case.

Janelle spent all day Wednesday trying to rally the six votes she needs to stay over Kaysar Ridha, campaigning to nearly everyone except Nicole Franzel and Ian Terry. She made compelling arguments — including that she’ll always be a target — and told people what they wanted to hear — even telling Tyler Crispen, who doesn’t get to vote as HOH, that she wants to take out the floaters if she stays. People seemed receptive, which could’ve just been lip service, but they all compared notes when she wasn’t around. Tyler, Cody Calafiore, Enzo Palumbo and Bayleigh Dayton would all rather Janelle stay, but nobody wants to rock the boat. For the guys, in particular, they know they could use her to go after Nicole and Dani Briones, who hate her.

“That’s why it’s stupid of us to get rid of Janelle,” Enzo said. “Dani wants Janelle out because Janelle will go after Dani.”

“And Nicole F. wants Janelle out. But if we try to make it flip, Nicole F. will take it personally,” Cody replied. “Right now, I’m not choosing that battle.”

Uh, why are you catering to Nicole? Sure, she’s in your alliance, but you’ve already acknowledged that you can’t take her far and have been plotting her future demise. The Committee is already shaky with everyone being annoyed at Memphis Garrett. Just cut the cord now and work in your own self-interest. Also, she’s already won! You can readjust and work with other people! You have a fake alliance in the Slick Six that you can make very real, Dani notwithstanding, but you can replace her with Janelle.

Cody, Enzo, Bay and Da’Vonne Rogers had a partial Slick Six meeting at the end of the night to rehash the pros and cons of keeping Janelle vs. Kaysar, but ultimately Cody shot it down because he thinks the vote-flip would get shot down and it’s safer to keep Kaysar. He, of course, meant “shot down by Nicole,” and Bay was like, “Why do we care about Nicole? She’s not in the alliance.” Cody navigated his way out of that, but that ought to set off alarm bells for BayDay. The argument is bad anyway because you only need six votes to flip it; if the four of them flip, they only need two more, which they could get from Memphis and Kevin Campbell. But they all like to “vote with the house” and are too afraid to be the one to make the big move. That’s literally what they’ve all told Janelle: They would vote for her, but they don’t want to be the one to lead the charge.

And so, barring some last-minute miracle, Janelle is going out the door Thursday, probably for the last time and for the first time against Kaysar, who will play without his “BB” other half for the first time. These two have the best friendship in the game and are always a hoot to watch because they know it’s just a game, but they can never last in there together.

Kaysar did some campaigning himself, but the best news for him is that once Janelle’s gone, the target may not be on him next. The Committee isn’t particularly worried about him because they think he might be lost with Janelle and that he won’t win anything, so they want to go after another pair next, like Bay and Day. And there’s also the option of David Alexander. Everyone learned about Davidgate — Tyler and Day cleared the air and are ostensibly good — and they all can’t believe how bad he is at the game. Cody and Tyler also declared that David is “dead to me.” Really unfortunate his clownery didn’t happen before the Veto.