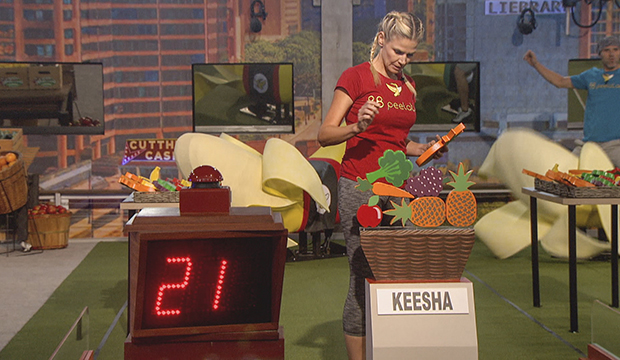 It was the night before the first eviction and all through the “Big Brother 22: All-Stars” house, things finally started to get interesting. Keesha Smith at last started campaigning, and despite seemingly throwing in the towel earlier, Janelle Pierzina continued to campaign for Keesha, which was probably not the best idea for her game.

It still looks like Kevin Campbell will live to see another week, but Keesha did do her version of 11th-hour campaigning, most of which consisted of asking people what they’ve been hearing about how everyone else will vote. What a convincing campaign. They gave her wishy-washy answers that she seemed to believe. But to her credit, she does think it’s leaning towards Kevin staying. She also talked to Cody Calafiore, telling him she’d be a bigger target if she stayed and wouldn’t go after him. He pretended like he hasn’t said who he wants to stay (Kevin), to which she told him everyone is waiting for him to point them in a direction. Yikes, girl.

At least she’s trying? More than what she’s done since nominations. And don’t think no one’s noticed. “Why the f— are you waiting until today to talk to people?” Da’Vonne Rogers said of Keesha to Nicole Franzel. “It’s like she’s not even really playing.”

“She really wants to stay, it seems like, but she is doing nothing about it,” Nicole replied.

Earlier Wednesday, Kaysar Ridha told Janelle that saving Keesha might be a lost cause, so they should just let it (and her) go. Janelle seemed to agree, but later, maybe energized by Keesha finally showing some sort of fight, she went to bat for her again. Perhaps the best thing she did (not for her game, but in general) was drag houseguests for voting like sheep for what the HOH wants in recent years.

Janelle: So tell me again why it's important to do what the HOH wants?
Banelle: I think that's like a recent rule. The last few years…
Janelle: But why is that strategic? We used to play if the HOH wants this person out, you do the opposite #bb22 pic.twitter.com/MA2GsYRNmc

Very “in my day” energy, but that’s why there’s so much love for old school “BB.” It’s just a very different game now, even from when Janelle last played on the 14th season. Bayleigh Dayton likes the idea of Keesha staying, but she doesn’t want to rock the boat, especially if the votes aren’t there for Keesha and she still ends up leaving.

Bay spilled her entire convo to Cody, including that Janelle questioned why people vote the way the HOH wants them to. She also said Janelle told her that Day is keeping Keesha, which is not true, but was just a really bad game of telephone/lying — Janelle got that from Christmas Abbott, who said Day acted shocked that Keesha didn’t have votes to stay.

“I feel like [Janelle] is trying to play me. She said Day is keeping Keesha. I know Day didn’t say that,” Bayleigh told him.

They and Day then deduced that Janelle is some sort of mastermind ringleader spearheading some alliance and wants to be the last girl standing. It’s hilarious when you remember that Janelle wants to target Christmas and David Alexander. But Janelle, who was always going to be a target, has done more than Keesha has to save Keesha, and unless she or Kaysar win HOH next, she might be in trouble.