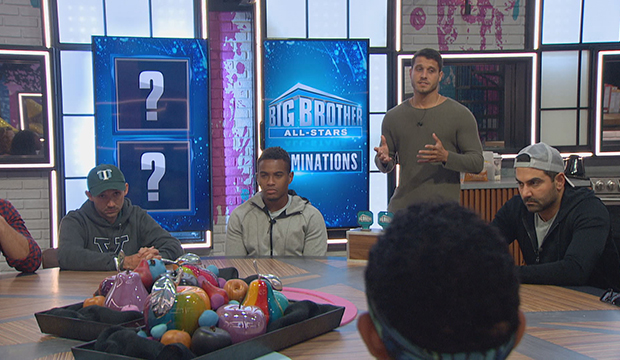 You know how when you’ve been out of commission for so long, you’re totally out of it when you get back into it, more so than you expected? That’s what it feels like with “Big Brother 22: All-Stars” right now. After Enzo Palumbo didn’t use the Veto on Monday, Keesha Smith and Kevin Campbell remain on the block, but neither has really made an effort to campaign, prompting this exchange between Kaysar Ridha and Da’Vonne Rogers Monday night.

Kaysar: “You know that this is the most boring week ever in ‘Big Brother’ history, right?”

Da’Vonne: “History. And this is supposed to be All-Stars.”

It’s gotten so murky that it’s now unclear who is leaving on Thursday, which, to be clear, is good. A Keesha boot was Cody Calafiore‘s plan after he had to pivot when Kaysar won safety for him and Janelle Pierzina, but mostly everyone’s keeping their votes close to the vest (at least that’s not much talk of “voting with the house,” which blergh). Kevin has done a tad more campaigning, asking people who they’re thinking of voting for, but not cutting the type of deals or making compelling pitches that would lock in votes. He also thought Janelle was behind him going on the block and would nominate her if he won HOH, but then later said he thought Memphis Garrett put his name in Cody’s ear. He also thinks Memphis is campaigning for Keesha and says this to Day shortly after Memphis told Nicole Anthony there’s no love lost between him and Keesha because he got her evicted on Season 10 and doesn’t care who goes. So Kevin’s reads are just bad all around.

SEE ‘Big Brother 22’ episode 2 recap: Cody makes nominations, and what the heck is the Safety Suite?

That’s still more than Keesha has done. Most of her DRs in Sunday’s episode were about how she hasn’t talked to Cody yet. Well, she still hasn’t. She mostly keeps to herself and primarily talks to Janelle and sometimes Kaysar, but there’s nary an attempt on her part to mount a campaign to avoid being the first evictee. It’s almost like she’s afraid to play. Nearly everyone else who talks about the vote has mentioned how Keesha hasn’t campaigned to them yet, and it doesn’t look like that’s about to change because with her, it doesn’t feel like one of those cases when the nominees wait until Wednesday to unload pitches.

But her saving grace may just be doing nothing. Towards the end of the night, when Christmas, at Memphis’ behest, pitched a new alliance to Cody — her, Cody, Memphis, Dani Briones, Nicole Franzel and Tyler Crispen — to which Cody agreed, she mentioned that she wants to keep Keesha because “you keep the one you can beat” (great subtle shade here). Cody said he’s only had convos with Kevin. Minutes later, Nicole F. told him the same thing: Keesha hasn’t campaigned to her, but she’d be easier to beat. And then she added this nugget: “I want to know who Janelle wants gone and I want to do the opposite.” Please let this somehow get back to Janelle.