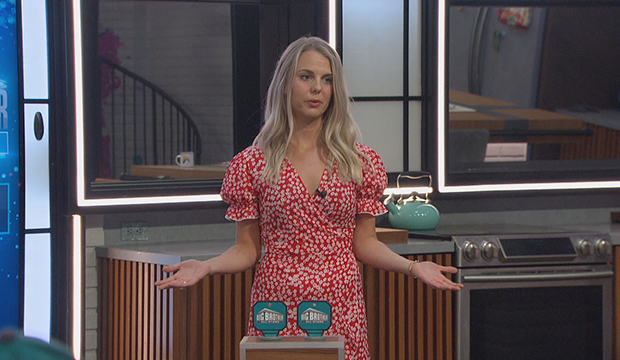 It was more of the same in the “Big Brother 22” house on Tuesday. Things alway slow down at the end, but it feels particularly hellish this season since every week has been a snooze. There was some slight wavering, but the plan remains the same, as does Memphis Garrett‘s cluelessness that he’s the actual target. So we could possibly see a blindside on Thursday. We’ve probably already jinxed it by saying it out loud.

Enzo Palumbo ostensibly started having second thoughts about sending out Memphis over Christmas Abbott, whom he thinks would take Nicole Franzel to final two over him and Cody Calafiore. But Cody quickly killed that by arguing that Enzo is a bigger comp threat and would beat anyone in the final, so he’s gotta go. Enzo then touched base with Christmas, telling her that they need to have each other’s back in final four and get to final two, to which she promised to protect him with the Veto if she wins and will evict Cody. Christmas said that Cody is going all the way if he stays, and Enzo acknowledged that he’d probably take Nicole to final two over them.

The most interesting part of this exchange was when they discussed Cody and Nicole’s pre-gaming with the “same mentor,” aka Derrick Levasseur. “They were on the phone for three months before this thing f—ing started,” Enzo said, confirming the worst-kept secret.

SEE ‘Big Brother 22’ spoilers: One nominee is in the dark about his doomed fate, so, uh, that’s something this week

Is Enzo finally seeing the light here? Hard to say. We know he’s all talk, but when push comes to shove, he takes the easy route. He likely on some level knows that he can’t beat Cody and that Cody will take Nicole to final two, but would he ever betray his bro, yo? This is what happens when you don’t evict Nicole when you had the chance.

As for Memphis, he’s confident that Wise Guys 1.0 has his back and that Wise Guys 2.0 will die with Christmas’ eviction on Thursday. It’s both hilarious and pathetic that he can’t see all the red alarms in front of him. He literally wondered aloud why Christmas was so chill and not campaigning when she’s going this week. Dude. But he also trusts Cody, and they reaffirmed a Wise Guys 1.0 final three, saying that they will cut Enzo at third. As soon as Memphis was out of sight, Cody told the camera, “Oh, boy, it’s going to be an interesting one” of Thursday’s vote since, you know, he’s going to evict Memphis.

What’s hilarious is that Cody was venting/lying to Memphis about how he doesn’t know what to tell Christmas about his vote, to which Memphis advised him to tell her outright he’s not keeping her because that’s what he did with Ian Terry and Kevin Campbell, and he thinks honesty “goes a long way.” “I think it’s a respectful thing to do,” he remarked. If only he knew.

If Memphis doesn’t figure it out on his own, it doesn’t seem like they plan on giving him a heads-up that they’re cutting him, so this may be our only eviction drama of the season.