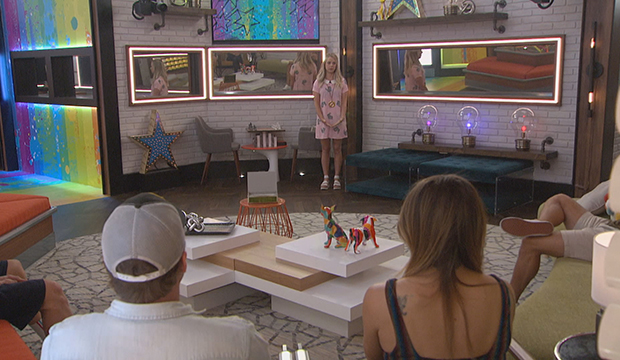 Wednesday night in the “Big Brother 22” house got a tad interesting as Enzo Palumbo made a final push to evict Christmas Abbott instead of Memphis Garrett, but as with most last-minute waffling cases, this ultimately went nowhere.

Enzo at one point said to himself that he wants Christmas out, so you know he’s serious. He tried to lay the groundwork for the flip by saying how bad he felt that Memphis doesn’t know he’s the target, but the problem is Christmas hasn’t done herself any favors by not campaigning to Cody Calafiore yet. They think it’s because Enzo had told her that Cody was keeping her, so now she feels comfortable. Enzo attempted to get out of it, like, “I don’t think I told her,” but Cody called him on it because he had heard it from Nicole Franzel, who was told by Enzo. Smooth, dude.

Enzo made some good points to boot Christmas, many of which would be beneficial to Cody: He said Christmas would cut Cody for sure next week if she had Veto, while Memphis would take the Wise Guys 1.0 to the final three; he thinks Nicole might take Christmas to final two over Cody; and Christmas has come closer to winning comps recently than Memphis, who has a bum back. Cody thinks Memphis would cut him at final four, which, as of now, he wouldn’t since he knows the Wise Guys 1.0 is all he has left. Cody eventually admitted that he would rather evict Christmas because she drives him insane, but he believes evicting Memphis is the better game move. Enzo’s counterpoint: Both moves have cons, so why not just evict Christmas?

SEE ‘Big Brother 22’ spoilers: Not to jinx anything, but we may get a blindside this week

Just when it seemed like it might be going somewhere, Nicole ruined the fun. She said Memphis “has to go” and she doesn’t want to break a tie since she kept Cody and Enzo safe. Plus, as she later pointed out, a split vote would only help Cody secure Memphis’ jury vote. Cody then said he was just testing Nicole to make sure she still wanted Memphis out. So we’re back to where we started: them debating whether they should tell Memphis first. They decided to blindside him. “I feel bad,” Nicole said. “It would be much more fun at this point to blindside her, but we are not doing that.”

Nicole then asked for them to give her a heads-up if they do plan to flip or split the vote, but Enzo and Cody promised they’re not flipping. “It’s 2-0. Memphis is getting blindsided, and if he wants to say sh– on his way out, he can say it and I’m going to say something back,” Cody declared.

So barring any funny business on Thursday, it looks like we’ll have our first blindside of the season. About damn time. Memphis really does not have any inkling he’s in the danger zone right now, so this could be a good one. Can’t wait for David Alexander to see this footage.