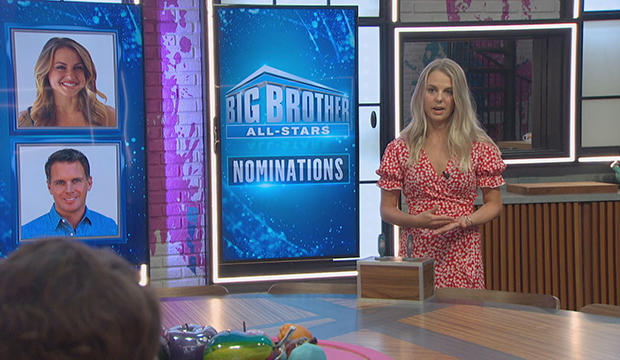 You really gotta give Janelle Pierzina credit for so accurately clocking Nicole Franzel back in, like, Week 1 of “Big Brother 22.” She said Nicole would loll about for most of the game and then roll out of bed in Week 9 and win comps. And that’s exactly what she did, winning HOH and Veto this week. She obviously didn’t use the Veto on Monday, so Christmas Abbott and Memphis Garrett, remain on the block, but it wasn’t without some effort on their part.

Christmas and Memphis really thought they could get Nicole to use it, which was cute. Nicole told Memphis the truth, but she let Christmas campaign to the bitter end to backdoor Cody Calafiore. But Christmas knows the real truth: Nicole wants Memphis out this week and reassured Christmas that if they get Memphis out this week, they can go after Cody next week (lol). Backdooring Cody is the big game move here, but Nicole was never going to do that. She later reaffirmed her commitment to Cody that she would take him to final two even though “people will give me shit for it for the rest of my life, but I will do it.” She is playing to be Cody 2.0 and not the first two-time winner.

This is basically a retread of last week. Christmas is the pawn against a strong male Committee member. The only difference is Tyler Crispen knew he was a goner the second he lost the Veto, but Memphis doesn’t yet. He thinks he’s staying — or at the very least, it’s close — because of the Wise Guys 1.0. He encouraged Christmas to campaign, but she said she’s not going to because “whatever is already in their heads is already in their heads.” She’s not wrong, but that should be a red flag to Memphis that she’s probably been told she’s not the target. It’s unclear if they plan on clueing Memphis in before Thursday (they probably will), but the plan now is for Nicole to make Christmas feel comfortable, and Cody and Enzo Palumbo to make Memphis feel comfortable.

Cody, meanwhile, is already planting seeds for next week. He really has the best of every world, and it’s insane that he’s going to cruise to the final three. Cody told Enzo about Nicole’s pitch for Cody to nominate her alongside Christmas if he wins HOH to play up the fact that Cody and Enzo are close so that Christmas would evict Enzo if she wins Veto. Cody said that he’d almost rather nominate Enzo then so Enzo could “play that card instead.” Cody is loyal to Nicole, so this is just him buttering up Enzo, and it’s almost like a warning for why Enzo would be on the block (plus, if this happens, Cody would then be able to brag that he’s the only one who made it through the season without hitting the block). Of course, no one has pointed out the obvious option of him nominating Nicole and Enzo because final four nominations don’t matter since it comes down to the Veto.

So that’s yet another early wrap on the week. The only mystery will be if Memphis will get a clue and realize he’s the target.