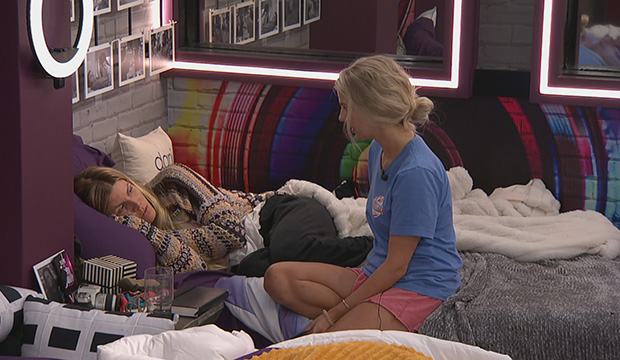 Monday went as expected in the “Big Brother 22” house — well, except for the fire David Alexander accidentally started while cooking. What an apt metaphor for the season. Tyler Crispen didn’t use the Veto and Christmas Abbott let her Blocker power expire, so Da’Vonne Rogers is on her way out the door on Thursday — and no, she still doesn’t know the truth about the vote, but Nicole Franzel is planning to tell her. Maybe.

Really, it’s exhausting at this point watching Day dig herself into an even bigger hole being so blindly loyal to Nicole and Dani Briones. At one point, even Kevin Campbell was like, “You know, maybe David was telling the truth and it was Nicole who flipped.” Day refused to entertain the idea because she did not believe that Nicole would “f— me twice,” referring to Season 18.

Day to Kevin: I just don't buy it. She's (Nicole) not gonna fuck me twice. She's not.

Um, what? Shouldn’t that be why you ought to be wary of her? You literally said the first week after she thanked you for voting  for to win that you’ve got your eye on her. Also, please look at Kevin’s face when she says this. Even he knows this is a big fate YIKES.

Day did go to Nicole to do her favorite thing: fact-check. Nicole, once again, denied voting Ian Terry out. Day showed some self-awareness, saying she doesn’t want to be bashing David if she’s wrong and “look like sh–” (too late). Nicole feels bad and told feedsters that she’s going to tell Day the truth before she leaves and just has to find the right time. During a pow-wow with Dani, who has now agreed to evict Day, Nicole said that if Day calls out David in her speech on Thursday, she’ll stand up and claim the rogue vote. What is more likely to happen is Nicole will confess right before the live episode when the feeds are down. Later, Nicole and Christmas discussed how Day thinks the big alliance is the boys except for Kevin, so she’ll be stunned when she finds out about the Committee, which is bad jury management. Uh, yeah.

Christmas also went to work on David. She and Memphis Garrett want to weaponize him to go after Dani and Nicole. Day had given a fiery (no pun intended) speech at the Veto ceremony, during which she called out everyone except Kevin, Dani and Nicole. (The nominee speeches have been cut from the broadcast episodes, so we’ll see if this one’s included.) Christmas noted that to David, hoping he’ll take the hint, and then flat-out said she thinks Day, Dani and Nicole pre-gamed and then added Kevin to their alliance in the house.

She offered him a very one-sided deal: If David wins two HOHs, guarantee her safety for both, and she will tell Day in her goodbye message about Nicole voting to evict Ian. Christmas and Tyler were already considering doing this, which David obviously doesn’t know, but it’s a totally lopsided deal and one in exchange for something that doesn’t protect him in the actual game. Plus, how will David even know Christmas told Day? Still, he agreed to it and wanted to talk about going to top five because that’s when their stipend increases.

There’s still ways to go before Thursday, but the vote isn’t going to change since the non-Kevin guys plus Christmas have the numbers to boot Day. The only drama left in the week is when/if Nicole will tell Day the truth and if Day will realize she’s been making a fool out of herself not believing David.