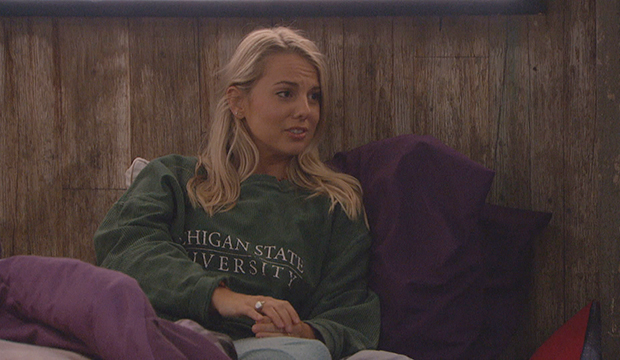 Know how we haven’t had a single vote-flip or blindside all season on “Big Brother 22”? We had the makings of one after Nicole Franzel had some second thoughts on Wednesday, but Cody Calafiore put the kibosh on that, so we continue to joylessly march along.

Nicole told Enzo Palumbo that they were making a huge mistake sending out Tyler Crispen because Christmas Abbott and Memphis Garrett are closer than she realized. She said that Memphis would want Christmas in the final three, so they and Cody would be in danger. Enzo argued that Tyler could also team up with Memphis if he stayed, which is a much more threatening duo, so they decided that they need to boot Memphis next.

Enzo, like the obedient soldier he is, ran this all back to Cody, who refused to budge about keeping Tyler, and Enzo nodded along. He was more open to the idea of evicting Memphis next week, and their brilliant plan is for Enzo to drive a wedge between them. They then talked Nicole down about evicting Christmas, and she gave in easily, pretty much being like, “Yeah, you’re right, wtf was I thinking?” Or, you know, maybe stand your ground more. To be clear, the Tyler vs. Christmas waffling was never really that close to flipping, but we’ll take whatever slim pickings we can get at this point.

SEE ‘Big Brother 22’ spoilers: ‘Tis the season to annoy the crap out of your fellow houseguests

Cody then razzed Nicole about being winless this season and reminded her that she needs to pick up the slack and win HOH this week, which, as you can imagine, did wonders for her insecurities. She remained stressed out for the rest of the night and later apologized to Cody for letting him down, to which he says she did not. Yeah, this will totally get Nicole focused for HOH.

Meanwhile, Tyler continued to campaign. His told Enzo that he’s planning to drop his own fiery eviction speech that will convince people to keep him. Sure. It’ll probably go as well as him “outing” the Committee to Enzo. Tyler did warn Enzo that he cannot go to final two with Cody because Cody would win against anybody, so he should cut Cody to build up his resume. He’s not wrong, but Enzo DGAF because Cody’s his bro, yo.

So that fleeting moment of hope was fun while it lasted. They plan on telling Tyler beforehand he’s getting evicted, so we’ll see if he still goes through with his speech. But really, there’s no reason not to even if it’s probably all smoke.