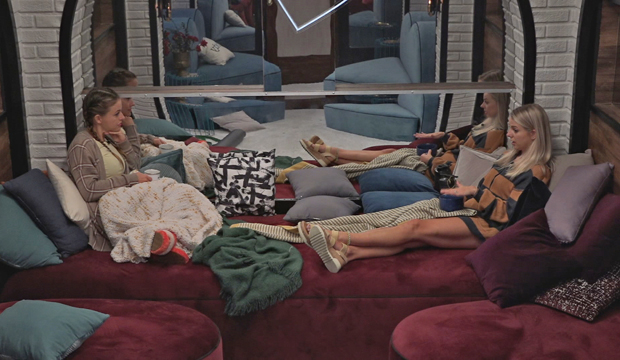 Thursday’s live episode 34 of “Big Brother” will end with the eviction of the unlucky 13th houseguest in the first 10 weeks of the competition. Six men have been sent home to date: Kaysar Ridha (week 4); Ian Terry (week 6); both Kevin Campbell and David Alexander (week 8); and Tyler Crispen (week 9). And another half dozen women have been evicted from the BB22 house: Keesha Smith (week 1); Nicole Anthony (week 2); Janelle Pierzina (week 3); Bayleigh Dayton (week 5), Da’Vonne Rogers (week 7) and Dana Briones (week 8).

Joining Ian, Da’Vonne, Kevin, David, Dani, Tyler and Memphis on the jury will be either Christmas Abbott or Nicole Frankel. Keep reading if you want all the “Big Brother 22” spoilers, including who will be leaving the house in the Week 11 eviction on October 22.

It is hard to believe that less than a week has passed since Enzo Palumbo took the title of Head of Household for only the second time this season. Less than 24 hours later, he named Christmas and Nicole as his eviction nominations.

These three along with Cody Calafiore form the Final Four and all of them took part in a hard-fought Power of Veto competition on Saturday. At the end of a hard-fought battle for this all-important power, Cody pulled off his fourth POV win of the season. We weren’t surprised at Monday’s Power of Veto ceremony when he decided to let his buddy Enzo’s nominations stand.

And it wasn’t a shock when Cody revealed that he planned to cast his vote, which is the only one this week, to evict Christmas. That will mean that Cody, Nicole and Enzo are the Final 3? Are you happy with this line-up? Vote in our poll as to who you’d like to see be evicted from the house on October 22: Christmas or Nicole. And be sure to sound off in the comments section with your thoughts on #BB22 so far.