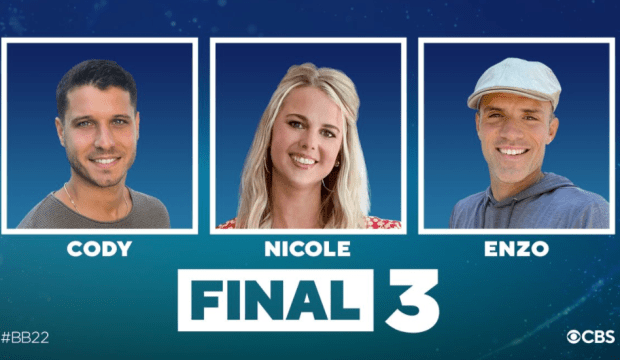 After three months and 37 episodes, season 22 of “Big Brother” ends on Wednesday (October 28) with a two-hour live finale. We’ve been glued to live feeds since last Thursday’s episode of #BB22 so keep reading for all the “Big Brother” spoilers. We can tell you who is in the Final 2 and which of these houseguests will win this all-star edition of “Big Brother” and claim both bragging rights and the $500,000 prize.

After the live October 22 episode, which saw the eviction of Christmas Abbott, the Final 3 players were Cody Calafiore, Nicole Franzel and Enzo Palumbo. On Monday’s episode, we saw Nicole win Part 1 of the 3-part Final Head of Household competition.

After Nicole won Part 1 on Thursday, Cody and Enzo were pitted against each other in Part 2 on Saturday. Enzo knew that it was do-or-die for her and that he must win. Part 2 played out offline and when the feeds returned we quickly learned that Enzo had lost to Cody. This meant Enzo faced certain eviction on Wednesday with Nicole and Cody competing in Part 3 to be Final Head of Household.

Or does he? Enzo has been busy lobbying Cody to evict Nicole should he win Part 3. But how likely is this to happen? Cody has been aligned with Nicole from the beginning. Assuming that he doesn’t decide to suddenly upend his strategy, it will be Cody and Nicole that go to the jury later on Wednesday evening.

We’ve been busy counting votes and expect that Cody has the edge, especially with Enzo joining five other fellows on the jury: Ian Terry (week 6); both Kevin Campbell and David Alexander (week 8); Tyler Crispen (week 9); and Memphis Garrett (week 10). There are only three women among the nin houseguests who will decide the winner of “Big Brother” 22: Da’Vonne Rogers (week 7); Dana Briones (week 8); and Christmas Abbott (week 11).

Who do you think will win: Cody or Nicole? Vote in our poll below and sound off in the comments section with your thoughts on season 22 to date.