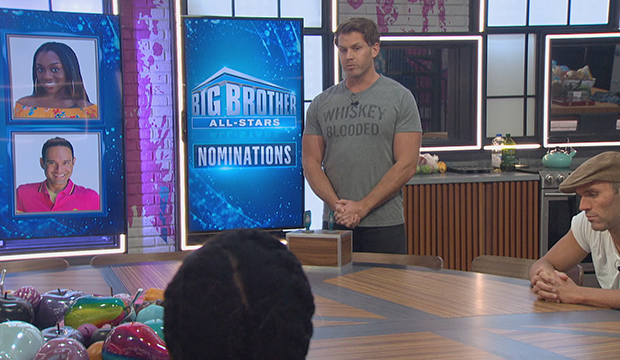 It was hard to imagine feeling sorry for David Alexander on “Big Brother 22” a month ago after Davidgate and his general gameplay ignorance, but now it’s hard not to feel sorry for him. Da’Vonne Rogers and Kevin Campbell — the former especially — are still under Dani Briones and Nicole Franzel‘s spell and don’t believe David that he had voted to evict Tyler Crispen last week. But justice for David will be served because Tyler is not going to use the Veto on either of them.

It’s really hysterical that Memphis Garrett went through this elaborate plan to backdoor David of all people and it’s not even going to work. He had asked people to throw the Veto, and while he was annoyed that Tyler didn’t, he’s not too pissed that he’s not going to use it because he ultimately doesn’t care who goes as long as it’s one of the three outsiders. This is where the Committee differs because Cody Calafiore wants Day gone yesterday, and Tyler, Enzo Palumbo and Christmas Abbott are onboard (Memphis is cool with her going too), but Dani and Nicole are closer to Day — which Cody et al. know — and want Kevin gone.

While Nicole has been more low-key about wanting to keep Day, telling everyone she’s fine with voting her out, Dani has gone to work on Day’s behalf, arguing to Christmas and Tyler that Kevin is better at comps and that Kevin and David are closer. She also told Christmas that Day is better for the girls’ game because she’s not coming for them. Christmas and Tyler reported back to Memphis, who was like “good to know.” Later, the Tyler, Cody and Enzo discussed targeting Dani during the double eviction. If this is what’s going to make the Committee implode, can we get on with it? Like, you could backdoor her now if you’re so wary of her.

Day and Kevin spent the weekend trying to hatch a plan to get Tyler to use the Veto. It was complicated and involved trying to frame David yet again for something he didn’t do. Memphis had told Day and Kevin before the Veto about his backdoor plan, so you can imagine their disappointment when Tyler won and has made it somewhat clear he’s not going to use it. Memphis has acted mad about Tyler to them, saying that he can’t force Tyler to do something (which is true), and also gave Kevin a heads-up that he’ll be OK because Tyler wants Day out. Dani told Day that the “boys” want her gone but she can flip it around. They also brainstormed another way to get Tyler to use the Veto, which is just a waste of time at this point.

Day and Kevin haven’t pitched Tyler anything yet, but they still have Monday morning before the Veto ceremony to throw a  futile Hail Mary. But it’s not going to work and she’ll likely be leaving Thursday. She’s still stewing about David”s “betrayal,” telling everyone that she’s no “fool,” so she’ll be absolutely mortified whenever she finds out the truth. We haven’t seen anyone this delusional since, well, Nicole Anthony being dead-ass wrong about Janelle Pierzina and Kaysar Ridha.

As we’ve said before, Day is a fun personality, but she’s her own worst enemy and pretty lousy at the game (not even counting her lack of comp wins until last week). Like everyone, she’ll have good and bad reads, but when they’re bad, they’re real bad. She lets her ego get in the way of adapting to game and taking opportunities to build and leverage relationships. The House formed last week knowing they’re the outsiders and they can’t get it together. Yes, David did mess up her game a month ago. Yes, he’s a bad player with frustrating gameplay and terrible communication skills that sometimes give you absolutely nothing and other times make him come off shady when he’s in fact telling the truth (like this instance). But she gets too hung up on one thing and can’t look at the bigger picture or if and why someone else could’ve “flipped” that vote. And as bad as David can be, he’s the one who nailed the Dani and Nicole frame job.

Since it’s the jury stage now, Julie Chen Moonves won’t get to blow Day’s mind with the reveal, but she could find out via the goodbye messages like how Ian Terry did about the Committee. Tyler and Christmas have talked about confessing in their goodbye messages that Day got played by Dani and Nicole. But knowing Day, she probably wouldn’t believe that either.