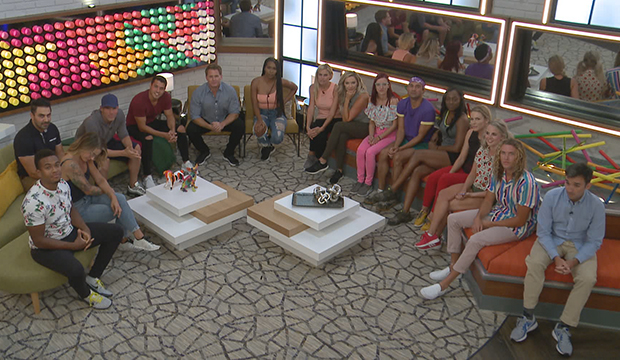 Tuesday in the “Big Brother 22: All-Stars” house brought a booze delivery and weekly COVID-19 tests… and that’s about as exciting as the day got. There still really hasn’t been any hardcore campaigning from Kevin Campbell or Keesha Smith, the latter in particular, but the houseguests are starting to make up their minds.

For now, the bulk of the house wants to keep Kevin because they like hanging out with him and think maybe he could be useful down the line. He’s also at least made a slight attempt to campaign. Even people who are ostensibly undecided like Bayleigh Dayton and Christmas Abbott know it’s leaning towards Kevin and they might just vote that way.

One of the few Team Keesha supporters, Janelle Pierzina put in way more work than Keesha did to try to save her, but she even she is losing patience at Keesha’s indolence. At one point, she said to Kaysar Ridha, “Kaysar, Keesha is terrible at campaigning. She says things like, ‘I wont eat your food.'” Look, she deserves to be dragged. You’re on the block! Do something to secure votes! Unless you don’t want to stay, which is honestly what it’s staring to look like.

SEE ‘Big Brother 22’ spoilers: The vote is up in the air as shockingly very little campaigning is happening

It’s really not an exaggeration to say Keesha has not campaigned at all. She just kind of hanging around and mostly sticks to Janelle, who literally told her to stop talking to her and to campaign.

Janelle: It doesn’t do you any good to hang out with me.

Keesha: I know. I already have yours. Damn it. I don’t like hearing that anybody is voting for him.

Keesha did get some alone time with Day and Bay hours later, but instead of trying to hammer out a deal or make a pitch, she made small talk as if she were stuck in an elevator with the boss of your company you never see. She basically did the same thing with Tyler Crispen, just asking him how he’s feeling about the vote and taking his equivocation — that nobody’s talked to him (which is a lie; he and Dani Briones have talked about keeping Kevin) — at face value instead of as an opening to campaign. Really, if she doesn’t do something by Thursday, this would be a mercy eviction at this point.

Meanwhile, Janelle stumping for Keesha may come back to bite her. Nearly everyone is wary of Janelle and Kaysar already and don’t trust them/want them out, so it obviously doesn’t help when she’s fighting the the person who most the house is probably going to evict. Kevin and Nicole Anthony have a final two deal, and Janelle made the mistake of campaigning against Kevin to Nicole A. Kevin and Nicole A. discussed how Janelle thinks she has Nicole A.’s and Ian Terry‘s votes to keep Keesha (Kevin also thinks Memphis Garrett wants to keep Keesha, so his terrible reads continue), but she doesn’t. Even worse, Janelle seems to have a blind spot with Nicole A., dismissing Bay’s assertion that Nicole A. would probably keep Kevin because they seem close by saying it’s because they’re Have-Nots. Has Bay infected everyone with FOUTTE energy while she’s now immune?