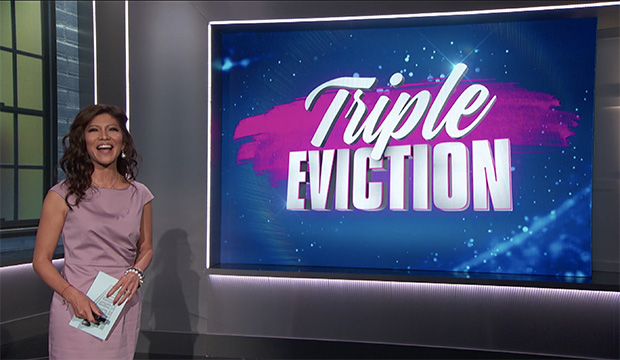 The inaugural triple eviction on “Big Brother Canada” was in its third season in 2015 (it has since done it on Seasons 5 and 6) and it works like this: After the regular eviction, a new HOH is crowned, and he or she nominates three people for eviction. The HOH does not compete in the Veto comp. If the Veto is used, the HOH names a replacement. And here’s the biggest difference: The houseguests then cast their vote to save, not evict, one of the nominees. The two nominees with the fewest votes are then evicted.

So will “BB22” mimic “BBCAN”? It would certainly be a huge curveball for the houseguests who would already be shook by the the bombshell of a triple eviction once Julie Chen Moonves announces it to them. Plus, it’d be hilarious if someone forgets the vote tweak and accidentally casts their vote to evict, like, ahem, David Alexander.

However, given that Thursday’s episode is two hours long, it’s more likely that the show will just do the double eviction format twice. So the first hour would be the first eviction, HOH comp, Veto comp and second eviction. And the second hour would be HOH comp, Veto comp and third eviction, with time remaining to get started on the next HOH comp.

If it does unfold this way, that would be a lotta comps to build and fit into the backyard, so probably half of them will be mental/Q&A comps that don’t require a lot of manual labor or space.

Or maybe the show will stun us with a completely different format, like letting Will Kirby pick who to evict, which honestly would be way more interesting than the season so far.