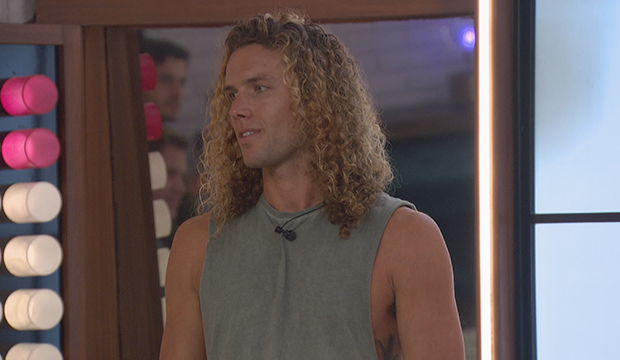 Tyler Crispen learned his lesson from “Big Brother 20” after making a billion final two deals only to fall short in the end, losing to his ride or die Kaycee Clark, thanks to some bitter jury members (and some poor jury management). He did the opposite on “All-Stars,” but, ironically, was burned by other people’s final twos. The curly-maned half of Tangela was evicted 3-0n Thursday, becoming the second member of the Committee to join the jury.

While he was ostensibly targeted for casting a vote to unsuccessfully evict Nicole Franzel during last week’s triple eviction, Tyler believes his downfall started way earlier. Find out when in our exit interview below.

Gold Derby: You didn’t want to make a bunch of final twos this time. Do you think that actually hurt you, now that you know about everybody else’s deals and because you didn’t have a partner like Kaycee [Clark]?
Tyler: Oh, yeah, definitely! I feel like I almost wish I could switch my game from last time and this time, and maybe have 16 final two deals like everyone else is doing because I did that on “Big Brother 20” and it burned me. So I felt like people were either 1) gonna think that was how I played and wouldn’t really believe it if I offered a final two for them or it was just going to burn me again in the end if I actually did it. I wish I could’ve, but because I did it in “Big Brother 20,” I don’t think there really was a way. And I definitely missed Kaycee in there. I wish she was there.

Gold Derby: When you offered to sacrifice yourself to be an ally to Bayleigh [Dayton] and Da’Vonne [Rogers] in Week 5, did you consider that it could backfire if Christmas [Abbott] wasn’t onboard to backdoor you?
Tyler: Yeah, 1000 percent. I honestly did not think Christmas was going to push me on that because it was kind of an out-there thing to do. I was being genuine in my intentions, like I really wanted to just do the right thing, what I felt was right in my mind. And I thought Christmas was going to go for it, but she pushed me on it, and it made me really click in the “Big Brother” zone because I wasn’t fully in the game at that point. I really had so many other intentions, and in my heart, I wanted to do the right thing this time and make sure that the right people were getting to the end, who I felt were deserving, so I tried to make that happen. But when Christmas pushed me on it, I realized like, “OK, this is obviously not a good game move for her, so I’m gonna have to get in my zone, and that’s just the way it’s going to be,” which made me sad.

Gold Derby: What do you think was more fatal to your game: offering to get backdoored or voting out Nicole?
Tyler: Oh, what was more fatal? I definitely think voting out Nicole wasn’t that huge. I really don’t think that was a huge reason why I left because I feel like it was already in the works for a while. So I definitely think offering to be backdoored was probably not the smartest game move. I’m sure it kind of built my reputation as reckless, random, so it probably made no sense to anybody in the house besides me — it made sense — but yeah, I’d probably say the backdoor thing hurt my reputation game-wise.