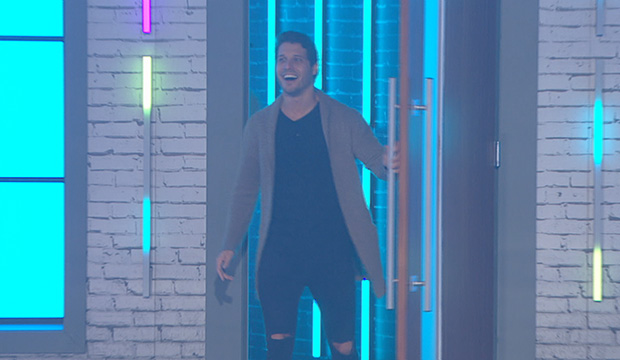 Cody Calafiore was not going to make the same mistake twice. In Season 16 of “Big Brother,” he took his ride or die Derrick Levasseur to the final two and lost decisively. He found himself in the same position in Season 22 of picking his final two companion, but this time chose strategically, selecting Enzo Palumbo over Season 18 champ and his Season 16 castmate Nicole Franzel.

“It weighed on me every time I was in the DR,” Cody told Gold Derby. “I was like, ‘I cannot pick somebody and go the end and lose again.'”

The 29-year-old chose correctly as he ended up sweeping the jury votes 9-0 to pocket the $500,000 and break the long-standing OTEV curse in the process. Of course, dominating the game with the Committee and winning eight comps help as well. Check out our exit interview with the second all-stars champ to find out when he decided to take Enzo, if he thinks Nicole will forgive him and more.

Gold Derby: Congrats! How does it feel — a couple days out and home again?
Cody: It feels good. Every day gets better and better, honestly. I feel better. I feel a little bit normal every single day that goes by. It’s definitely nice and refreshing to be back at my safe haven at home.

Gold Derby: You’ve said you were really torn between Enzo and Nicole. When did you finally decide to go with Enzo? Did you know before you won Part 3 that you would take him or was it not until after?
Cody: I knew going into that day that I was taking Enzo to the final two. It became an easier decision. Throughout the game, I always said, “Enzo’s my No. 1, Nicole is my — can’t call her my No. 2 — she’s like my No. 1.” It was so crazy to play the game with Nos. 1, but they were Nos. 1 to me in completely different ways. But I always felt like I wanted to take Enzo to the end.

Going through everything in the last week solidified in my head that I do not feel confident [beating] Nicole. I feel more confident if I win and take her … but it’s more, like, fair that unless [Enzo] comes out with this insane speech that has this strategy that none of us saw and blows people away, I think I can talk to the jury and explain why I should win over Enzo. And they’d be more partial to being like, “OK, I do think Cody played better than Enzo.” Whereas with Nicole, I felt like a winner getting to the end, they may have been clouded and blinded by just that alone, so me saying something wouldn’t have even helped my case. So I felt like it was a fairer opportunity going against Enzo, and it worked out.

Gold Derby: I know you gave Nicole a heads-up that you were evicting her, but you didn’t tell Enzo. What was your strategy there?
Cody: My thing with Enzo was just keeping the narrative that we’ve been saying all season — I had told him, “Listen, bro, it’s you and me ‘til the end of this game. Don’t worry about it.” I think what got into Enzo’s head was that he knew by the end how tight I was with Nicole, so he was like, “Oh, man, I wonder if he’s gonna take her.” He would always say things to me, like, “I feel like I should’ve cut Nicole [in the triple eviction].” Honestly, if he had cut Nicole and that wasn’t something him and I had decided to do together, that would’ve affected his and mine relationship, which could’ve affected his game. I just felt like I didn’t need to constantly tell Enzo because we had been saying it all game, all season long. But I guess people on the outside were like, “We had no idea what you were gonna do.”

Gold Derby: Because you didn’t talk to the cameras that much. They were always talking and she was practicing her speech, but you kept things to yourself. I thought that was kind of cool because we couldn’t tell your true intentions, so we could only go by what you were telling them, and you were reassuring Nicole too.
Cody: Exactly, I was telling the same thing to Nicole. I would go into the DR like, “Listen, I don’t want you guys want to get thrown off. I’m saying the same stuff to both of them, so I don’t know if you’ll have much to go with.” With Enzo, I don’t want to cross and say stuff to Nicole and then make Nicole feel some type of way. I wanted Enzo to go to Nicole and say the same nonsense narrative of “I don’t think we can beat him,” not “Nicole, Cody is taking me.” I didn’t want him to throw me under the bus to her, so I had to say one thing to him. And I had to still keep it going with her because if she had won, I needed her to take me.

And I didn’t like talking to the cameras because I think sometimes it comes across as a little arrogant. I didn’t want to be talking that way and all of the sudden get cut and look like that person, like, “Oh, you thought you were so far ahead and now you’re out.” I didn’t wanna be that person, except for sometimes when people would say stuff to me and I would look at the camera and be like, “Oh, my God. You’re so off. I wish you could know how much further ahead in this game I am than you.” I didn’t like being like that because I thought it came across as a little arrogant to enjoy what you were doing in the house, and I was just there for the game. I just wanted to play and be about the game, and then I would talk about it in the DR, so they would know everything that was going through my head.

Gold Derby: Nicole was obviously visibly shocked and blindsided that you cut her. How long do you think it will take for her to forgive you and get over this?
Cody: I don’t know. I really don’t know. It’s hard to say. I think you would think somebody that’s won the game and went through it kind of understands that I went to the end and picked Derrick. [She and I] had conversations where she was like, “If you had cut Derrick, I would’ve voted for you and probably so would’ve a lot of other people, and you would’ve won our season.” So I would think she would have that understanding, but it’s not — you know, I don’t want to force the issue with her. I’m just waiting to see if she’s going to reach out to me and then if a little bit of time goes by and she doesn’t, maybe I’ll reach out. But I don’t know. I don’t know what her headspace is like because I know she was very hurt by what happened and understandably so.

Gold Derby: Enzo says he would’ve voted for Nicole if you had cut him. Do you believe that?
Cody: Yeah, because I think Enzo is spiteful. And I also think it weighed heavily on him the first time [on Season 12] that he got cut by Hayden [Moss]  and then voted for Hayden to be the winner when he could’ve stuck it to Hayden right there. He would talk about that all the time how it was a 4-3 vote between Hayden and Lane [Elenburg], and Enzo’s was that fourth vote. … So it could’ve weighed on Enzo because I think a lot of people gave him grief after that, and, you know, I think Enzo would’ve been pissed.

Gold Derby: Things really fell your way this season, which almost never happens on the show. The Committee was dominant and running the game. Enzo could’ve nominated you when he was HOH so he could’ve been the only one not on the block, but he didn’t do that. How surreal was it for you to not face so much adversity during the show?
Cody: Yeah, it’s crazy. It was really refreshing to have the Committee winning a lot of the HOHs, but it was also extremely stressful because even though the Committee was winning a lot, so you could personally feel like you can relax, I just felt like if the proper things weren’t happening, it would cause a reverse snowball effect that would not have been good for me. The important aspect of the Committee always winning was picking and choosing and knowing, “This person has to go home right now.”

There were points where like, if Memphis [Garrett] had won that HOH and backdoored David [Alexander], I don’t know what would happen. Da’Vonne [Rogers] studied information always. She could’ve won a comp and if David goes home, she would’ve targeted me. In those points, going into the triple eviction, so much stuff happens that if the right people weren’t going home, it would’ve blown up my game. So even though there was that calm, “Oh, the Committee won,” in my individual game, we still have to do the right stuff or the Committee winning is just gonna end up imploding anyway, and if the right people aren’t gone, then I would’ve probably been gone shortly after. So it was nice, but it was also very stressful because I didn’t want to be like, “Oh, just send home who you want to send home this week.” A lot of people were doing that and I was like, “I don’t really like that.”

Gold Derby: How does it feel to break the OTEV curse?
Cody: I heard about this! Because Enzo brought it up in the game. He was like, “No one who’s won OTEV has won the game, so haha, you just lost.” And I was like, “Oh, no.” So I feel like it’s a huge accomplishment.

Gold Derby: It’s been going on since Season 7. I feel like it’s fitting because it started with the first all-stars and it ended with this one.
Cody: I love it. Hearing it like that makes it even cooler — starting with the first all-stars and ending with the second one — that makes it even better. I love it. Winning OTEV — it’s like a staple of the game — and to break the curse is really cool.