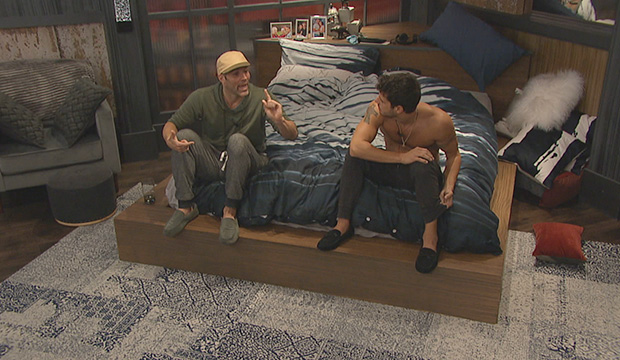 And then there were three. With the finale of “Big Brother 22” scheduled for Wednesday, October 28, all eyes are now on which player has what it takes to go the distance and win the $500,000 grand prize.

For almost the entire season Cody Calafiore has dominated Gold Derby’s predictions, and he still leads with 53/20 odds to win. Second place goes to Enzo Palumbo with 20/1 odds, followed by Nicole Franzel at 100/1 odds. Do you agree or disagree with the predictions of your fellow fans? There’s still time to make your own picks.

Making it to finale night is nothing new for this trio of popular “All-Stars.” Nicole has actually won the game before (Season 18) and recently made history as the person to play the most days in the “Big Brother” house, shattering the records of Janelle Pierzina, Daniele Briones and Paul Abrahamian. Meanwhile, Cody was the runner-up to Derrick Levasseur (Season 16) and Enzo came in third place to Hayden Moss and Lane Elenburg (Season 12).

In terms of their competition victories throughout Season 22, Cody has bragging rights for winning the most Head of Household comps (three) and Veto challenges (four). Next up is Enzo with two HOHs and one Veto. And Nicole trails with one HOH and one Veto, both of which she won last week, resulting in the eviction of Memphis Garrett.

Of course, competitions are just one aspect of winning “Big Brother.” Another strong factor is how a person deals with jury management. Were the social games of Cody, Enzo and Nicole strong enough to win over jury members they previously voted out? We’ve seen in past “Big Brother” seasons where the most “deserving” contestant failed to win because of bitter juries — think Paul losing to Josh Martinez (Season 19) or Ross Mathews losing to Marissa Jaret Winokur (“Celebrity” Season 1).

Be sure to make your predictions to influence our reality TV racetrack odds. You can keep changing your predictions until just before the eviction episode airs live on CBS. You’ll compete to win a $100 Amazon gift card and a spot on our “BB” Season 22 leaderboard. See our contest rules and sound off with other fans in our reality TV forum. Read more Gold Derby entertainment news.