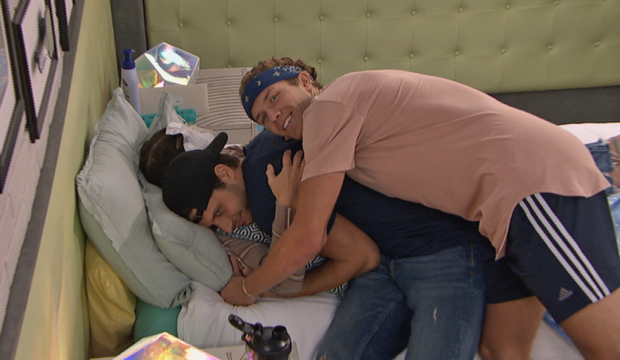 In the span of one night, the number of houseguests on “Big Brother 22” went from nine to six, and fans are still reeling from all that went down. (Read our minute-by-minute live blog.) Of the Final 6 houseguests of this epic “All-Stars” cycle, who do you think truly DESERVES to win the $500,000 prize? Vote in our poll below for Christmas Abbott, Cody Calafiore, Enzo Palumbo, Memphis Garrett, Nicole Franzel or Tyler Crispen and then be sure to defend your choice in the comments section.

At one point Nicole called Thursday’s triple eviction her personal “nightmare” after she was nominated twice by her Committee alliance members Memphis and Tyler. In the end she survived, but it was at the expense of so-called “pawns” Kevin Campbell and David Alexander and her close ally Dani Briones.

The night began with host Julie Chen Moonves teasing the house about a double eviction, when really they were about to experience the show’s first-ever triple eviction. Kevin was the first person sent packing on Thursday, and he openly teared up when Julie told him the show had aired his intimate conversations about being biracial and a member of the LGBT community.

Next up the remaining players competed in a Dr. Will Kirby-inspired Head of Household competition where Memphis proved victorious. He nominated Nicole and David for eviction. The race for the Veto played out with Christmas prevailing, though she opted not to save either of the nominees from the chopping block. The house soon voted to evict David, but it wasn’t unanimous as both Tyler and Christmas cast wayward votes for Nicole.

That’s when Julie informed the house about the night’s big secret: they were in the middle of a triple eviction, not a double. The contestants once again returned to the backyard where they did another “true or false” HOH comp. Tyler prevailed and chose to put his Committee alliance members Nicole and Dani in the hot seats. After Tyler won the Veto (surprise, surprise, he didn’t use it), the house voted unanimously to send home Dani.

Only six people remain in the “BB22” house. Who do you think truly deserves to win? Vote in our poll right now: