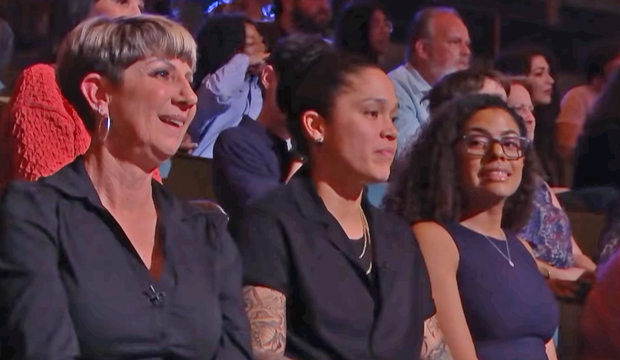 Is “Big Brother” winner Kaycee Clark auditioning to become the next Simon Cowell? During the highly anticipated Season 15 premiere of “America’s Got Talent,” eagle-eyed viewers noticed this pro-footballer player from San Diego sitting in the audience. As it turns out, Kaycee wasn’t just a normal “AGT” audience member. She was all mic’ed up and ready to give color commentary on the auditioners, such as when she declared it was comedian Vincent Marcus‘ “first time doing this in front of an audience.” Watch Kaycee’s blink-and-you-miss-it appearance below at the 30-second mark.

SEE‘America’s Got Talent’ judges through the years: Sofia Vergara is 13th ‘AGT’ judge in 15 seasons

Kaycee won “BB” Season 20 in 2018 against runner-up Tyler Crispen by a narrow 5-4 jury vote. Our “AGT” live-blogger John Benutty first noticed the reality TV double-dipper during Archie Williams‘ emotional singing performance. “I’m pretty sure I even caught a glimpse of ‘Big Brother’ winner Kaycee Clark in the audience,” Benutty recapped, “cheering on Howie as he told Archie that the love the audience is giving him from that performance is a small gift back to him for the life that was stolen from him by being sent to prison.”

It’s not unusual for big-budget reality programs like “America’s Got Talent” to have microphones in the audience to gather fun responses or emotions in real time. You may have also noticed a pair of gray-haired, bespectacled, female twins in the crowd, as the camera kept cutting to them at various moments during the two-hour premiere as they commented on and reacted to the wild acts in front of them.

Both of the performers who auditioned with Kaycee in the crowd — comedian Vincent Marcus and singer Archie Williams — made it through to the next round based on the votes of “AGT” judges Simon, Howie Mandel, Heidi Klum and Sofia Vergara. That means these talented acts will next be seen in the Judge Cuts, where they’ll compete for a spot in the all-important live shows.

Tuesday’s round of auditions were filmed 17 days before “stay-at-home” orders were put into effect to help stop the spread of coronavirus. In later audition rounds, the show had to film without an audience present at all. Word is still out on how Season 15 of “America’s Got Talent” will handle its live shows, which in recent years have taken place at the Dolby Theatre with thousands of people in attendance.

'America's Got Talent' Judges Rankings: All 13 Ranked From Worst to Best