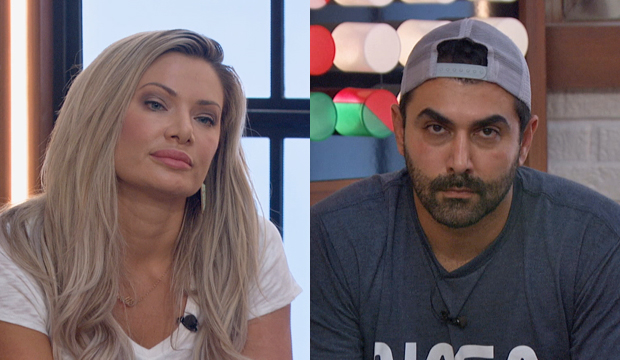 Heading into Thursday’s live episode of “Big Brother 22,” it was eviction night for either Janelle Pierzina or Kaysar Ridha. These “BB” legends were targets from the moment they entered the “All-Stars” house, but it took three weeks before they were nominated by Head of Household Tyler Crispen. Since both members of the “Jaysar” alliance were considered huge threats, there was no telling how the other 11 players would vote: Cody Calafiore, Ian Terry, Da’Vonne Rogers, Enzo Palumbo, Nicole Franzel, Dani Briones, Christmas Abbott, Bayleigh Dayton, Kevin Campbell, David Alexander and Memphis Garrett. So who ended up having a one-on-one conversation with Julie Chen Moonves at the end of the night?

Below, check out our minute-by-minute “Big Brother: All-Stars” recap of Season 22, Episode 10 to find out what happened Thursday, August 27 at 8:00 p.m. ET/PT. Then be sure to sound off in the comments section about your favorite houseguests on CBS’s reality TV show, who annoys you the most and who you think will ultimately join the “Big Brother” winners list.

SEEKaysar Ridha (‘Big Brother 22’) on potential eviction: ‘If I stay in this house, I’m gonna come back gunning’

8:00 p.m. — “Previously on ‘Big Brother’!” In the ninth episode, Kaysar and Janelle fought for their lives in the cupcake-inspired Veto competition, but both came up short[cake]. Cody won the Power of Veto and chose not to use it because he didn’t want to “ruffle anymore feathers.” Thus, one of fans’ all-time favorite “old school” players will be evicted tonight. Who will be forced to mask up when they meet Julie, and who will become the next Head of Household for Season 22? Let’s go!

8:05 p.m. — Following the Veto meeting, Cody admits that Janelle is the target. She’s a competition beast and they’re afraid players will migrate towards her if she gets on a winning streak. Janelle isn’t one to mope around and instantly gets to work. She tells Tyler that he’s voting out a big target that could protect him and Tyler is starting to see the light. Janelle was never gunning for Tyler. Did he just make a huge mistake? Meanwhile, Kevin and Christmas are talking on the patio, and while Christmas seems adamant that Janelle goes home, Kevin is leaning towards keeping her. He hasn’t talked game with Kaysar at all. He doesn’t tell Christmas this information, but he reveals it in the Diary Room.

8:10 p.m. — “The Slick Six” consisting of Tyler, Cody, Enzo, Dani, Da’Vonne and Bayleigh meet up to get on the same page. Bayleigh says there is a lot of pressure on the guys right now because Janelle would be the third girl evicted in a row. Despite being a woman herself, Dani seems most determined to send Janelle out the door. Da’Vonne says she doesn’t care who goes, but she wants Janelle to stay. There are too many men running this house.  Downstairs, Christmas tells Kaysar that she thinks he’s safe this week and could be okay moving forward. Feeling comfortable, Kaysar decides not to campaign too hard this week.

8:15 p.m. — Janelle corners Memphis and asks if he knows which houseguests are against her. He says he knows nothing, but if she can get five votes he will side with her. Next she goes to Kevin and he also agrees to keep her if she can get a majority. Up next she speaks with Dani, who thinks it’s laughable to keep Janelle. Of course she tells Janelle she’s leaning towards keeping her. Bayleigh urges Janelle to work on Cody because he has all the influence. Without wasting any time she heads straight to Cody and gives her pitch. She offers to let him hold her wedding band as collateral while promising not to target him if she’s the next HOH. Cody is intrigued.

8:20 p.m. — Tyler told David that Da’Vonne tried to flip the vote to evict him over Nicole A. last week. Hurt, David goes and asks for confirmation from Bayleigh, even though Tyler pleaded with him not to say anything. Bayleigh urges David to talk to Da’Vonne about it…and he does. Bayleigh acts as moderator while Da’Vonne vents that she doesn’t think David trusts her. David then tells her that Cody and Tyler both told him Da’Vonne tried to flip the vote on him. Huge rookie mistake on David’s part! Loose lips sink alliances.

8:25 p.m. — Da’Vonne gets emotional and begins to cry about how she is throwing her game away for David. Da’Vonne and Tyler are both going to regret trying to work with this senseless rookie. Tyler sees David is getting upset so he pulls him aside to talk. David lets Tyler know that he told the girls everything, getting a “Bro, WTF?” from Tyler. After working to take out the biggest target in the house, Janelle, Tyler’s friend David may have just made him the biggest target. David realizes he’s not as good at this game as he thought he would be. That’s true, he’s not. Tyler is convinced Da’Vonne will never trust him again.

8:30 p.m. — Da’Vonne is frustrated that she went above and beyond to help David with his game and now he’s accusing her of trying to flip the vote. Bayleigh is trying to talk Da’Vonne off the ledge, but it’s not exactly working. Meanwhile, Tyler tells Cody about everything that went down. Cody is flabbergasted.

8:40 p.m. — It’s time for the live vote and eviction! Will Janelle or Kaysar be the third All-Star sent home? By a vote of 9-2, Janelle has been evicted. Oddly, Dani and Enzo were the votes to keep her. I’m not sure what the strategy behind that was.

8:59 p.m. — It’s time to begin the HOH competition. As the outgoing HOH, Tyler is not eligible to compete. In “Carnival Quick Shot,” players compete in groups of 6, rolling balls up a ramp in an attempt to sink all three balls in the holes at the top of the ramp. The first three to complete the task will advance to the final round. The first houseguest to sink three balls in the final round will become the new HOH. This sounds like a quick competition, but it’s much more difficult than it sounds. They will not finish during this live episode. We can see that Kaysar was quickly the first to finish in heat one. That’s a wrap for tonight!