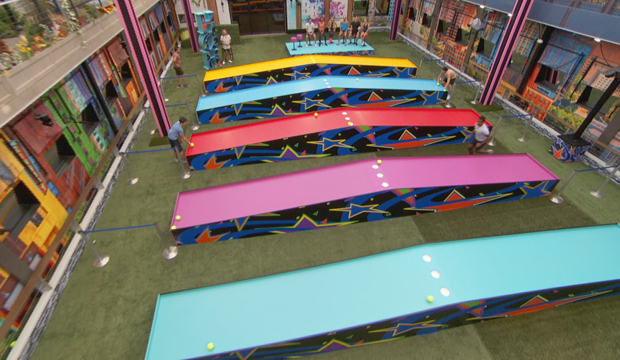 Following the eviction of Janelle Pierzina from “Big Brother 22,” only 13 players remained in the “All-Stars” house: outgoing Head of Household Tyler Crispen and Kaysar Ridha, Cody Calafiore, Ian Terry, Da’Vonne Rogers, Enzo Palumbo, Nicole Franzel, Dani Briones, Christmas Abbott, Bayleigh Dayton, Kevin Campbell, David Alexander and Memphis Garrett. The battle to become the next HOH concluded on Sunday night, with the dozen eligible players tasked with rolling balls up a ramp. The first player to get his or her balls to land in the holes after multiple rounds would win the power for the week and later have to nominate two houseguests for eviction. So how’d it all play out?

Below, check out our minute-by-minute “Big Brother: All-Stars” recap of Season 22, Episode 11 to find out what happened Sunday, August 30 at 8:00 p.m. ET/PT. Then be sure to sound off in the comments section about your favorite houseguests on CBS’s reality TV show, who annoys you the most and who you think will ultimately join the “Big Brother” winners list.

SEEJanelle Pierzina (‘Big Brother 22’) exit interview: The queen will not leave the house ‘without a cocktail dress on’

8:00 p.m. — “Previously on ‘Big Brother’!” In the 10th episode, the houseguests voted whether to send home Kaysar or Janelle. In the end, two people voted to evict Kaysar (Enzo and Dani) while the majority chose Janelle. “I’m blown away, good job Memphis,” she told Julie Chen Moonves when she learned about her “old school” buddy betraying her. Janelle then realized that Kaysar was going to keep telling Memphis all of his secrets, adding, “This is terrible.” How will the house react to Janelle’s early eviction? And who will become the fourth HOH of the summer? Let’s go!

8:02 p.m. — In the first round of the HOH comp, Da’Vonne, Ian, Kevin, Nicole, Enzo and Kaysar were battling to be the first group of three players to advance to the final round. No one knew the pressure of winning more than Kaysar, believing that he’d be the target this week if anyone else became HOH. On the sidelines, Tyler was hoping that it’d be Cody or Enzo to come out of the comp with the win to secure his own safety.

8:04 p.m. — Dani let us know that her plan with the hinky vote to save Janelle was a plan to stir up some drama in the house, so I guess she won’t be telling anyone it’s her? Meanwhile, Kaysar became the first player in the first round to get his three balls in.

8:06 p.m. — Enzo followed as the second player to advance while both David, Da’Vonne and Ian were attempting to get their third ball in. Eventually David was the one that got his in, meaning Da’Vonne, Nicole and Ian were all eliminated and we moved on to the second round.

8:11 p.m. — In this round Cody, Dani, Bayleigh, Christmas, Kevin and Memphis competed for only three spots in the final round. Dani was the quickest to get all three of her balls in and then was joined by Kevin and Cody, eliminating Bayleigh, Memphis and Christmas.

8:15 p.m. — In the final round only one of Kaysar, Cody, Dani, David, Kevin or Enzo would make their three balls to become the new HOH. Kaysar, David and Enzo all sank a ball immediately, quickly setting themselves up for success. Kaysar was the first one to get a second ball in, but privately almost everyone in the backyard was hoping that Kaysar would be the only one to not win. Enzo and David both came back to make a second ball and leveled the playing field.

8:22 p.m. — Kaysar came incredibly close to sinking his third ball, but as if out there to save the entire house from a Kaysar win, Enzo sunk his and took his first HOH comp in BB history. In the DR he says he’s “here to cause chaos” though, so does that mean he’ll do something other than nominate Kaysar? For the sake of  saving the season, let’s hope so.

8:24 p.m. — Later, Cody approached Dani to ask her if she threw a hinky vote to save Janelle, but she denied it. Apparently the day before the vote the two of them discussed doing it in order to throw Bayleigh and Da’Vonne under the bus, but at the time Cody refused to do it. That Dani denied it to his face after the fact raised a red flag for Cody.

8:26 p.m. — Bayleigh and Da’Vonne were in an emotional state over missing family and realizing that people voted for Janelle to stay when they couldn’t even as her friends. They also knew they had hard work ahead of them to prevent the house from thinking they were the two votes. At one point, both Da’Vonne and David came into a room of Dani, Cody and Christmas asking who the votes were and at this point everyone in the house denied it. When David came into the room he cluelessly didn’t even know how to answer the question “who did you evict?” Clearly that made him look guilty, but they do know he’s absolutely lost in the game, right?!

8:30 p.m. — Later in the day Cody told Enzo about Dani’s plan to throw two votes to pin on someone. Enzo figured her plan would be to pin it on Bayleigh and Da’Vonne, which further put Dani in a hole. Little did Cody know that one of the actual hinky votes was his buddy Enzo right there.

8:35 p.m. — Kaysar and Da’Vonne had a private conversation about what it’s like to be cultural minorities and the nuances of the Black Lives Matter movement. George Floyd and Breonna Taylor‘s murders both came up in a passionate point from Da’Vonne. She explained the skin color always come into play for her life, including in this game where she has to adapt in an environment where the majority doesn’t look like her or share her experiences. Kaysar said that these kinds of conversations are the reasons why he decided to come back, so that he could let these topics come to national attention through the show and he could show his kids and other young people that you must have courage to not sit idly by.

8:41 p.m. — Dani and Nicole have what seems like a one-sided alliance. For Dani it’s all the way to the end with no secrets, but privately Nicole seems to be less strict in her loyalty to Dani. The stronger alliance for Nicole is still probably Cody, who seems to be closer to Enzo than even Nicole.

8:44 p.m. — Following a talk in his HOH room with Kaysar, Enzo came to the conclusion that a game talk after four weeks wasn’t enough to save Kaysar from the nomination block even if Enzo thinks he’s a great guy and could potentially work with him. Isn’t this the same story Tyler had about Janelle last week before leading the house to her eviction and then regretting it? What is wrong with these people this season? Are they even all stars? Big Brother 22: Amateurs!

8:50 p.m. — Ahead of nominations Enzo attempted to further reel Christmas in for an alliance by vowing to be loyal to her with a “I protect you, you protect me, that’s it.” So basically the same set of seven people just keep making side alliances with each other while the floaters float around with their heads spinning. Snooze! Christmas clued Enzo in to how close Nicole is with Ian and Dani, making them all options for Enzo’s second choice to go on the block.

8:56 p.m. — At the nomination ceremony, Enzo revealed the photos of Kaysar and Kevin, nominating them for eviction. So much for “chaos,” right? Enzo said it’s “nothing personal” and that after four weeks neither of them talked game with him and “that’s it.” Kevin was distraught again and Kaysar looked like he knew the writing was on the wall. He also just looks exhausted and ready to go, no? Why stay in a house when lazy all stars with no desire to make strong moves just keep coming after you?

NEXT TIME: On Wednesday we’ll see how the Power of Veto plays out and if either Kevin or Kaysar come off the block, forcing Enzo to name someone to replace them.