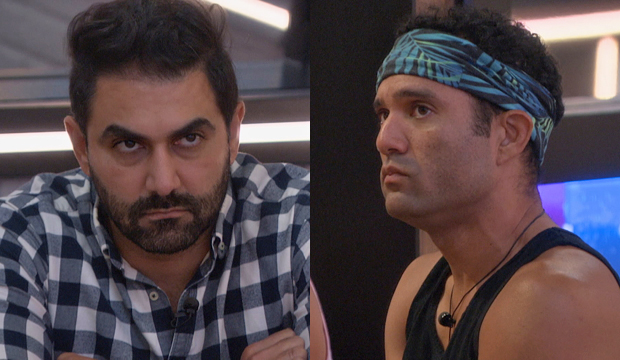 Heading into Wednesday’s Veto episode of “Big Brother 22,” Head of Household Enzo Palumbo had nominated both Kaysar Ridha and Kevin Campbell for eviction. Kaysar was his number one target because he saw him as a huge threat, while Kevin was simply a pawn. Both men hoped their games would be saved by the Power of Veto, in which case Enzo had made it clear he had his eye on David Alexander and Ian Terry as possible backdoors. So how’d it all play out?

Below, check out our minute-by-minute “Big Brother: All-Stars” recap of Season 22, Episode 12 to find out what happened Wednesday, September 2 at 8:00 p.m. ET/PT. Then be sure to sound off in the comments section about your favorite houseguests on CBS’s reality TV show, who annoys you the most and who you think will ultimately join the “Big Brother” winners list.

SEEJanelle Pierzina (‘Big Brother 22’) exit interview: The queen will not leave the house ‘without a cocktail dress on’

8:00 p.m. — “Previously on ‘Big Brother’!” In the 11th episode, the HOH competition played out in three rounds, with Enzo winning by being the first person to sink his three balls in the holes. Enzo’s goal was to nominate people who hadn’t spoken any game with him, like Kaysar and Kevin. Also in the episode, Christmas Abbott‘s All-Star Mommy punishment finally ended, Dani Briones lied to Cody Calafiore about throwing a hinky vote, and Dani and Nicole Franzel got even closer in the house.

8:05 p.m. — Following the nomination ceremony, Enzo confirms Kaysar is his target. Kevin is just a pawn to fill the second slot but we still have to listen to his self loathing. Meanwhile, Nicole thinks Enzo is playing it safe and she doesn’t want to rock the boat. She doesn’t know who the replacement nominee will be if Kevin or Kaysar wins the POV.

8:10 p.m. — Kaysar approaches Enzo to let him know he’s not upset. Kaysar asks Enzo if he’s comfortable with his place in the house right now. Kaysar says if he stays, he will keep Enzo safe. Enzo agrees to working with Kaysar, but in the Diary Room he makes it clear that he has no intention of playing this game with Kaysar. Downstairs, David is talking to Bayleigh Dayton about his shaky position in the house. Bayleigh is sad that David feels like an outsider, but he has done it to himself. That man is in his own world.

8:12 p.m. — Ian tells Enzo that if he wins the POV he will only use it if Enzo wants him to. Enzo doesn’t trust Ian at all and if one of the nominees come down, Ian is definitely on his radar. Enzo seems annoyed that people want to talk game with him. This is how the game works! Finally Cody comes to chat with Enzo. Cody seems to be the only person Enzo wants to talk to. They agree Ian is a huge threat and may need to be backdoored.

8:18 p.m. — Memphis Garrett is bored so he decides to start his own “BB” talk show, “Mornings with Memphis.” His first guest is Kaysar and they have an audience of zero. Kevin asks David if he would play for him in the Veto. David agrees. They want to make some game moves and shake up the house.

8:20 p.m. — It’s time to pick players for the Veto competition! Joining Enzo, Kaysar and Kevin are: Tyler Cripsin (drawn by Enzo), Bayleigh (drawn by Kaysar) and David (chosen by Kevin after he drew Houseguest’s Choice). Kevin confirms with Kevin that he will take him off the block if he wins the Veto. Meanwhile, Kaysar approaches Bayleigh to drill it into her that Cody, Tyler, Enzo and Nicole don’t care about her. Bayleigh feels like Kaysar is being condescending by assuming she’s low on the totem pole. She’s confident in the Slick 6, but she has no idea it’s a fake alliance.

8:25 p.m. — The bros (Cody, Enzo and Tyler) are upstairs wondering why Kevin chose David to play. They really seem to get frustrated when there is even a hint that anyone is playing the game. They say they don’t trust David now, but it doesn’t matter. Their trust for him was lost a long time ago.

8:40 p.m. — It’s time for the Veto competition! The players’ arms and legs will be attached to puppet strings, being pulled in all different directions. The last player to fall will win the golden Power of Veto. The players dropped in the following order: Kaysar, Enzo, Tyler, Bayleigh, David and Kevin. Kevin has won the Power of Veto and the ability to remove himself from the block. Who will Enzo choose as the replacement nominee?

8:45 p.m. — Ian reveals to Kaysar that he’s nervous about being put on the block. Up in the HOH room, Enzo asks Cody and Nicole who he should put up. Cody suggests throwing Ian up on the block, but Nicole is secretly working with Ian. Enzo asserts that he’s not playing around this season and is ready to make a big move.

8:55 p.m. — Christmas offers herself up as a pawn for Enzo. She’s a little worried it may make her look expendable, but she also wants to solidify her trust with Enzo. Later on, Dani mentions pulling the Slick 6 together for a meeting in front of Nicole, forgetting Nicole isn’t part of the Slick 6. This upsets Tyler who runs straight to Enzo to snitch. Tyler suggests backdooring Dani right now and they’re convinced they have the numbers to do it. Enzo gets pumped up, talking about how nobody can be sneakier than him. So does this mean he’s ready to backdoor Ian or Dani?

8:59 p.m. — After pledging to make big moves, Enzo replaces his pawn, Kevin, with Christmas, another pawn. He is targeting Kaysar, a player with no allies, and pitting him against Christmas, a pawn. What a lame move. Unless the house completely flips on its head before Thursday’s live eviction, Enzo’s HOH reign is the most boring so far. Hopefully someone willing to shake up the house will win tomorrow night’s HOH competition.