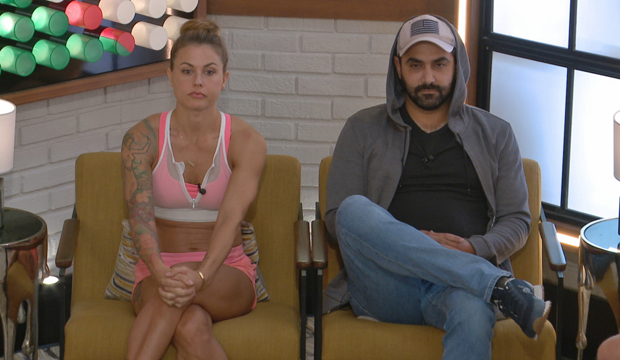 A week after Janelle Pierzina‘s eviction from the “Big Brother 22” house, things were looking dire for her best friend Kaysar Ridha. This “BB” legend was nominated for eviction by Head of Household Enzo Palumbo alongside one of the most-liked players in the game, Christmas Abbott. Did Kaysar receive a Christmas miracle during Thursday’s live elimination episode, or did the house vote to send him out the door? Also, who became the fifth HOH of this “All-Stars” season?

Below, read our minute-by-minute “Big Brother: All-Stars” recap of Season 22, Episode 13 to find out what happened Thursday, September 3 at 8:00 p.m. ET/PT. Then be sure to sound off in the comments section about your favorite houseguests on CBS’s long-running reality TV show, who annoys you the most and who you think will ultimately join the “Big Brother” winners list.

SEEKaysar Ridha is not giving up just yet: ‘This is Big Brother, I have to come up with something’

8:00 p.m. — “Previously on ‘Big Brother’!” In the 12th episode, nominees Kaysar and Kevin Campbell gave it their all in the endurance Veto competition, with Kevin claiming victory. He soon took himself off the block, which meant Enzo had to nominate someone as a replacement. The Meow-Meow briefly considered nominating former winner Ian Terry, but ultimately decided to throw up Christmas as a pawn after she volunteered. “I for sure am hoping this doesn’t backfire on me, or I’m just gonna walk out of here wearing a dunce cap,” she stated at the end of the episode. How will tonight’s live eviction play out? Let’s go!

8:08 p.m. — Following the Veto ceremony, Kaysar knows he’s a sitting duck. He approaches Memphis Garrett and asks him if really wants to watch Cody Calafiore and Tyler Crispin run the house. Memphis is smug about it and says he doesn’t believe there’s an alliance (because he thinks he’s a part of it). Meanwhile, Enzo is done with Dani Briones and is ready to cut ties with her. Cody tells Enzo about the other alliance he’s in with Dani, but Enzo doesn’t care. He’s all in with Cody and Tyler.

8:15 p.m. — Tyler is tired of Dani trying to turn everyone in the Slick 6 against each other. He tells Bayleigh Dayton that Dani has been planting seeds to get rid of Bay and Da’Vonne Rogers. Next Tyler approaches Da’Vonne and apologizes for being distant. He tells her Dani is targeting her and Da’Vonne is shocked. The Slick 6 is over. As far as Da’Vonne is concerned, Dani has to go. Meanwhile, Cody, Enzo and Tyler sit up in the HOH room plotting who needs to be evicted next, while absolutely nobody targets them. Incredible!

8:20 p.m. — Ian slowly figures out what’s going on in the house. He is telling Kevin that Cody, Tyler, Nicole and Dani definitely have something going on. He thinks Cody and Nicole are the core of everything and they have various sub-alliances. He confesses in the Diary Room that he still plans to work with Nicole, but he’s cautious. Kevin is so grateful that Ian has figured this out and they are determined to find a solution.

8:25 p.m. — Next Ian approaches Bayleigh to explain his theory. Her mind is blown and says she’s open to share information with him moving forward. After thinking about it for a bit, Ian realizes Kaysar has nothing to lose. He hatches a plot to convince Kaysar to blow up everyone’s game. He approaches Kaysar and tells him he’s mapped everything out (and he has). Kaysar appreciates the information, but he’s annoyed that he’s expected to take the shot that everybody else is too scared to take.

8:35 p.m. — It’s time for the live vote and eviction. Prior to the vote, both Christmas and Kaysar give a brief speech. Christmas delivers a lame poem. Then Kaysar decides to light the house on fire by telling them they all “suck.” He says Cody and Nicole have been running the house since day one. Let me just quote Kaysar:”They have a secret alliance that’s going to take them all the way to the end. Meanwhile, the guys have an alliance — Enzo, I already knew when we were talking, with David and Tyler. The last alliance, of course, Dani, Nicole and Cody. Cody finds himself in this love triangle, but nobody’s willing to take a shot. So here I am, sitting around on the block. If you want to play the game, keep things the same. If you want to play All-Stars, then keep me here.” He then smugly asks for Cody’s vote. Yes! That was beautiful. Next, the house unanimously votes to evict Kaysar.

8:59 p.m. — It’s time to crown a new Head of Household! As the outgoing HOH, Enzo is not eligible to compete. Players will square off two at a time where they will have to answer questions about images they see. The answer will be one of three choices – more, exactly or less. The first to ring in with the right answer will stay in the game and choose the next two players to face off. The last houseguest standing will become the new HOH. Here is how the game played out: Kevin eliminated Ian, Cody eliminated Nicole, Da’Vonne eliminated Kevin, Memphis eliminated Cody, Dani elminated David, Da’Vonne eliminated Bayleigh, Memphis eliminated Dani, Da’Vonne eliminated Tyler, Christmas eliminated Memphis and Christmas eliminated Da’Vonne. Christmas is the new Head of Household. I guess we’re in for another week of the same. Hopefully the newly revealed room in the house will shake things up. In the “BB Basement,” players will compete completely in the dark for three game-changing prizes.