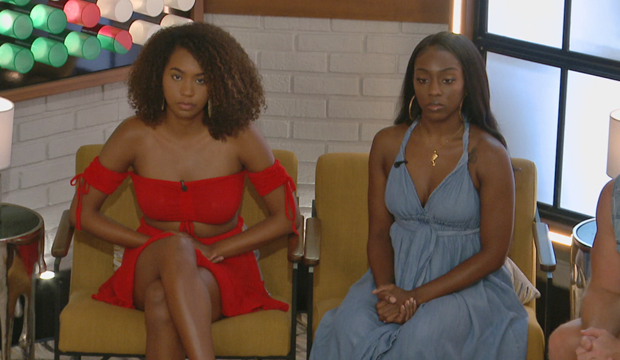 After a week of fights and betrayals, one of Christmas Abbott‘s nominees — Bayleigh Dayton or Da’Vonne Rogers — was evicted from the “Big Brother 22” house on Thursday night. The Head of Household originally nominated the dynamic duo because they were coming after her “Committee” alliance, plus the fact they admitted to being each other’s “untouchables,” which meant they’d always have their own backs over someone like Christmas. So who did the house vote to send outside to meet Julie Chen Moonves for a socially distanced exit interview?

Below, read our minute-by-minute “Big Brother: All-Stars” recap of Season 22, Episode 16 to find out what happened Thursday, September 10 at 8:00 p.m. ET/PT. Then be sure to sound off in the comments section about your favorite houseguests on CBS’s long-running reality TV show, who annoys you the most and who you think will ultimately join the “Big Brother” winners list.

8:00 p.m. — “Previously on ‘Big Brother’!” In the 15th episode, Tyler Crispen briefly considered throwing in the towel and going home as penance for his causing havoc in the game between Da’Vonne, Bayleigh and Dani Briones, but Christmas wasn’t having it. After all, Tyler was her own “untouchable” in the house. Da’Vonne ended last night’s episode saying that it “sucks” being on the block next to her best friend in the game, Bayleigh. Which player will be evicted tonight, and who will be crowned the next HOH? Let’s go!

8:08 p.m. — Christmas refuses to put Tyler on the block and Da’Vonne is flabbergasted. Bayleigh is hurt and refuses to accept a hug from Christmas. She knew Tyler wouldn’t go up on the block. Later, Christmas talks to Cody Calafiore and Tyler, expressing her frustration that Bayleigh is playing with her emotions. Meanwhile, Bayleigh feels guilty that she brought Da’Vonne down with her by confiding in Christmas that Da’Vonne was her “untouchable.”

8:12 p.m. — Da’Vonne approaches Christmas to get answers. Christmas says putting up Tyler would have ruined her game and made her look stupid. She doesn’t want to take shots for Bayleigh. Da’Vonne doesn’t understand why she has to be sacrificed for Christmas’ problem with Bayleigh. Christmas ensures Da’Vonne that she’s safe and Da’Vonne stays cool, but in the Diary Room she assures the viewers at home that “Christmas is cancelled!” Next Da’Vonne approaches Tyler and he rehashes the story that Christmas didn’t think backdooring him was good for her game. Wisely, Da’Vonne tells Tyler she needs him in this game and they hug it out.

8:15 p.m. — Over in the bedroom, Enzo Palumbo and David Alexander are talking about how they would prefer Bayleigh stay, but they don’t think they have the numbers to flip the house. Then, suddenly, Cody receives heartbreaking news that his grandfather passed away. Tyler sees him crying and comforts him and soon after the rest of the house huddles around Cody.

8:25 p.m. — Da’Vonne walks in on Christmas talking about Bayleigh “being upset.” Da’Vonne thinks Bayleigh has the right to be upset because she’s on the block. Da’Vonne tells Christmas the reason she’s getting an attitude is because they’re on the block and Bayleigh feels like Christmas stabbed her in the back and twisted it. Bayleigh thought they were friends. Christmas doesn’t think Da’Vonne and Bayleigh understand how “Big Brother” is played and starts yelling. Da’Vonne walks away because she knows if she acts like Christmas everyone will say “that’s what we expected her to do.” Next, Bayleigh approaches Christmas and Christmas instantly starts crying. Bayleigh says Christmas doesn’t get to play the victim and then Christmas absolutely blows up! She starts screaming and clapping her hands in Bayleigh’s face before running to the HOH room. Bayleigh says if she clapped in someone’s face she’d be called a “ghetto black girl” but for some reason it’s okay for Christmas to do it. Next, Christmas comes storming out of the HOH room and starts yelling towards anyone who will listen. Dani and Kevin Campbell just stare at her like she’s crazy. Bayleigh walks in and tells Christmas she’s a coward and a screaming match ensues.

8:42 p.m. — It’s time for the live eviction. The house has unanimously voted to evict Bayleigh.

8:59 p.m. — It’s time for the live HOH competition to begin. As the outgoing HOH, Christmas is not eligible to compete. Julie informs them that all the players remaining in the game have made it to the jury. Back to the competition – it’s an old fashioned endurance challenge where the players are all perched on a ledge. Whoever stays on the longest will become the new HOH. The first three houseguests to fall off will become Have-Nots for the week. The competition starts now, but won’t end until well after “Big Brother” is off the air tonight. That’s a wrap!

'The Masked Dancer' preview: Who's performing tonight (January 27) during Super 6…

'The Masked Dancer' winner predictions: Tulip and Cotton Candy nipping at each other's…

'The Masked Dancer' Super 6 Hammerhead spotlight: Can he put a nail in the competition or is he swimming…

'The Masked Dancer' Super 6 Exotic Bird spotlight: Will she soar over the competition en route to the…