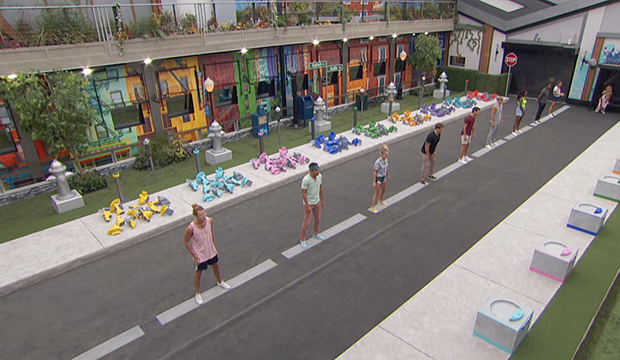 Suffice it to say, Dani Briones‘ Head of Household reign last week on “Big Brother” was an unmitigated disaster. Because the Disruptor power and the Veto medallion were both used, Dani had to put up four houseguests for eviction: Ian Terry (who was evicted), Tyler Crispen (who survived the block), Kevin Campbell (who was saved by Da’Vonne Rogers‘ Veto) and David Alexander (who saved himself with the Disruptor). With Dani sitting out of the HOH puzzle competition, only nine players competed: Cody Calafiore, Enzo Palumbo, Christmas Abbott, Nicole Franzel, Memphis Garrett, Tyler, Da’Vonne, Kevin and David. So who received this week’s HOH key, and which two contestants did they nominate for eviction?

Below, read our minute-by-minute “Big Brother: All-Stars” recap of Season 22, Episode 20 to find out what happened Sunday, September 20 at 8:00 p.m. ET/PT. Then be sure to sound off in the comments section about your favorite houseguests on CBS’s long-running reality TV show, who annoys you the most and who you think will ultimately join the “Big Brother” winners list.

SEEIan Terry (‘Big Brother 22’) exit interview: ‘It hurt’ to be evicted but I’m ‘ecstatic’ to learn ‘it was part of a good plan’

8:50 p.m. – “Previously on ‘Big Brother’!” In the 19th episode, all Ian thought he needed was four votes to force Dani to break the tie in his favor. Ian had the votes of Da’Vonne, Kevin and David and thought he had Nicole’s vote, but he was blissfully unaware that his best friend had a bigger alliance and that they had no plans of keeping him in the house. “To see that it’s just a good plan and they got me, that’s awesome,” the former winner told Julie Chen Moonves after exiting the house. Aww, such a good sport! Who will become this week’s HOH? Let’s find out.

8:54 p.m. – Late start here on the East Coast due to football and “60 Minutes,” but we’re on so let’s go with this HOH! Apparently David worked really hard on a “plan” to force Dani to have to break a tie between Ian and Tyler, but someone didn’t come through for him. We know that Da’Vonne and Kevin came through and that Nicole didn’t, but Nicole had to go through the house playing along with the other three to not blow the cover of “The Committee.” It’s funny that David thought he was running this entire vote and pinning it on Dani, but everything he said was being filtered through to Dani by Nicole and Kevin.

9:01 p.m. – But all of that is to say that David, Da’Vonne and Kevin had a million reasons why they need to win HOH tonight because now that they “flipped” the vote against the rest of the house they’ll have a lot to answer for.

9:06 p.m. – Unlike last week it sounds like Cody actually wants to win this HOH comp in order to protect his numbers. And Dani, who didn’t want to win last week told us she decided not to use her power on herself so that she could compete again this week because she wants to “creep back into the dark” after so much attention on her this week.

9:09 p.m. – Looking like he was finished, Memphis ran to hit his button, but he was buzzed wrong, giving Tyler a little bit more time to catch up. Ultimately it didn’t take long for Memphis to find his screw up and so he corrected it and and scored himself a second HOH win! Privately he says he “never lost control of the house” and is excited to move back upstairs.

9:13 p.m. – Memphis says his goal as HOH this week is to set himself up for “a run at the finals” and it’s clear that David is shaking in his boots. Not sure how those things go hand in hand because David is hardly a roadblock to Memphis. That being said, the plan Dani and Nicole came up with to frame David is working on Da’Vonne so perhaps everyone in the house will be ready to evict David.

9:17 p.m. – Kevin makes it clear to David that it seems like the women are questioning David’s vote at the same time that Da’Vonne runs to Nicole to further throw David under the bus. Nicole played it perfectly to let Da’Vonne believe he voted with her, but she’s clearly committed to “The Committee” even if it’s against her own interests. Given all of Nicole’s antics and tears this week with Ian being nominated, doesn’t Day think Nicole would be a bit more emotional over being surprised by him actually going home against a plan? Think about it, Day!

9:20 p.m. – Day made it clear to David that she doesn’t believe him despite his repeated attempts to tell her that he’s saying the truth. What is so hard for her to believe him is because his actions in the past have gone against her. This is really sad to watch.

9:22 p.m. – After his conversation with Day and Kevin, David blew up and screamed across the house out of the frustration that no one is willing to be truthful with him long enough to play the game with him. This makes Dani happy because it means all the eyes are going to be on him and her plan to set him up is working.

9:28 p.m. – The funny thing is that David knows the truth about what is going on, despite him being the one that everyone thinks doesn’t know how to play the game. It’s clear to him that Nicole and Dani planned that to throw him under the bus and that it’s clear they’ve been working together for quite some time. But even after talking with him, Kevin still gives only “5% chance” that what David is saying is true.

9:31 p.m. – Once again the previous Have Nots got to pass off their duties to new people this week. Day passed hers off to Christmas and David passed his off to Cody. Neither of them were too happy about those decisions, especially Christmas who spoke up about Day saying all week that she’d be giving it to Kevin. Once again Christmas is acting up with her aggression and competitiveness in front of everyone and targeting Day with it. What a brat!

9:38 p.m. – While sharing a bath, Nicole, Dani and Christmas shared an acknowledgement that they’d “love to see a female win All Stars.” Fittingly, Nicole stumbled out of the tub after that, probably because aside from working for themselves, the three of them haven’t been working in the interest of a female winning!

9:41 p.m. – Ahead of nominations, Memphis had a conversation with David with the intent of making a “straight up business deal” with him to not play in the POV and leave his nominations the same. He also asks him to not speak to anyone of it while insisting that he has other plans this week that don’t involve nominating him. On those terms, David shook his hand without getting any input for himself and walking out of the room believing that Memphis was legit.

9:46 p.m. – At the nomination ceremony, Memphis stuck to his word to David and instead nominated Da’Vonne and Kevin. He told Da’Vonne that them exercising the Power of Veto last week was all he needed to know in order to nominate them together this week, but privately he told us that his actual plan is to backdoor David.