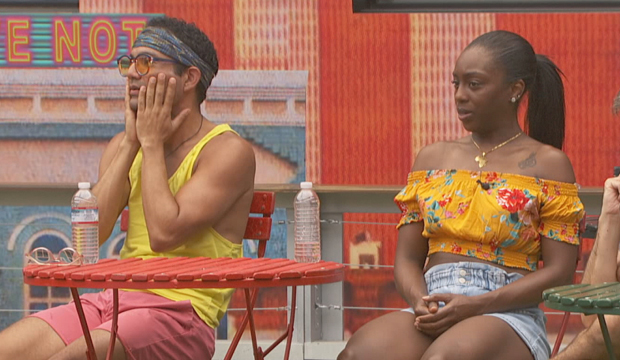 Another week of “Big Brother,” another nomination for Kevin Campbell. The four-time nominee was put on the block alongside Da’Vonne Rogers (it’s only her second time) by Head of Household Memphis Garrett earlier this week, but the plan is for neither of them to actually go home. “They’re basically just pawns so I can backdoor David,” Memphis proclaimed about David Alexander, his nemesis in the game since week two. Even though the HOH shook David’s hand and promised he wouldn’t go up on the block, Memphis had no plans of honoring that deal. In other words, David needed to win the mid-week Veto competition if he hoped to stay in the game. So how’d it all play out?

Below, read our minute-by-minute “Big Brother: All-Stars” recap of Season 22, Episode 21 to find out what happened Wednesday, September 23 at 8:00 p.m. ET/PT. Then be sure to sound off in the comments section about your favorite houseguests on CBS’s long-running reality TV show, who annoys you the most and who you think will ultimately join the “Big Brother” winners list.

8:00 p.m. — “Previously on ‘Big Brother’!” In the 20th episode, the fallout from Ian Terry‘s eviction was super dramatic for the three people who voted to keep him: Da’Vonne, Kevin and David. They believed they had four votes and would force Dani Briones to break the tie, not knowing that the fourth person, Nicole Franzel, was actually working with a larger alliance in the house. Elsewhere in the episode, taco night ended with Cody Calafiore and Christmas Abbott being Have-Nots for the week, and they were not too happy about it.

8:10 p.m. — Following the nomination ceremony, Memphis maintains that his goal is to send David home. Kevin heads up to the HOH room to ask Memphis why he is on the block. Memphis hints to Kevin that he’s not the target, but Memphis doesn’t want to tell anyone David is his actual target. Dani Briones is upset because Da’Vonne didn’t listen to her last week. Dani told her not to use the Veto because it would put a target on her back, and now Da’Vonne is on the block. Later, Da’Vonne tells Kevin that Memphis is either working with David or planning to backdoor him. Kevin says his new friendship with Da’Vonne has already made him a winner this season. This brings Da’Vonne to tears while sentimental music plays in the background. Awe, friendship.

8:20 p.m. — Dani wants to save Da’Vonne and hopes Memphis will be okay with a backdoor plan. When a few Committee members meet up, Memphis confirms that he wants to backdoor David. He tells Dani, Nicole and Tyler to throw the competition so either he or one of the nominees can take themselves off the block. They all nod at Memphis, but none of them actually think this is a good idea. Next, Memphis tells Da’Vonne and Kevin the plan and assures them they’re safe. Da’Vonne doesn’t trust Memphis, but it’s at least somewhat nice to hear you aren’t the target. Upstairs, Tyler questions why Da’Vonne and Kevin didn’t pick David to play in the Veto. Also, Tyler thinks he can reel David in, but a power duo like Da’Vonne and Kevin must be split up. I love how Tyler refers to them as a “power duo” considering they have no power in the game at all and have barely won anything.

8:25 p.m. — Tyler goes directly to Cody and complains about Memphis’ plan. Cody is infuriated and says they can absolutely NOT keep Kevin and Da’Vonne together in the house. Again, the fear of this duo is baffling. These people have been in power for so long, they have no clue what an actual threat is. I can’t wait until they are forced to eat their own. Cody thinks Memphis’ plan is an “absolute nightmare.” LOL.

8:30 p.m. — Zingbot has returned! The snarky roaster of “BB” houseguests is back to throw shade at this cast of boring All-Stars and I can’t wait! Tyler exclaims, “I hate this guy!” which only confirms he dislikes whatever makes this show interesting. Zingbot is sporting a fresh mullet and some fringe, looking a bit like a…Tiger Zing? Here are his best zings:

“Enzo! What’s more pathetic than a man in his 40’s still calling himself the Meow-Meow? Nothing.” Zing!

“Memphis! Most people think of you as Dan’s number one. But to me, you’re more of a giant number two!” Zing!

“Dani! From your first season on ‘Big Brother,’ you looked like an old pro. Now you just look old!” Zing!

“Kevin! I came up with a nickname that captures you perfectly and has a great ring to it…booooring!” Zing!

“Da’Vonne! You’ve done three seasons of ‘Big Brother’ and two seasons of ‘The Challenge.’ So I’m dying to know, which reality show do you plan to lose next?” Zing!

“Nicole! I wrote a song for you. Here comes the bride, she loves to whine and cry. Every time I hear her voice I want to f***ing die!” Zing!

8:45 p.m. – For the Veto competition, players will have to track down three escaped alien tigers in a maze and return them to their correct cages. The houseguest with the fastest time will win the golden Power of Veto. Each competitor takes their best shot and they all legitimately appear to be trying their best, despite Memphis’ command for half of them to throw it. When the times are revealed, Tyler is announced the winner. Now instead of Memphis backdooring a clueless player this week, we can thank Tyler for likely keeping the nominations the same and sending home my favorite Diary Room confessor, Da’Vonne. I guess I should also note that Da’Vonne and Kevin had the worst times, so if one of them goes home they can only blame themselves. Bummer!

8:59 p.m. — Da’Vonne doesn’t think Tyler will use the Veto and she believes Memphis is a liar. Memphis pulls Tyler aside and asks, “What’s the plan?” Memphis emphasizes he wants David gone and Tyler disagrees. Tyler is suspicious of Da’Vonne’s relationship with Nicole and Dani. Memphis questions everyone’s loyalty at this point. Finally, the Veto meeting arrives and Tyler chooses NOT to use the Power of Veto. Either Da’Vonne or Kevin will be joining Ian in the jury house on Thursday.