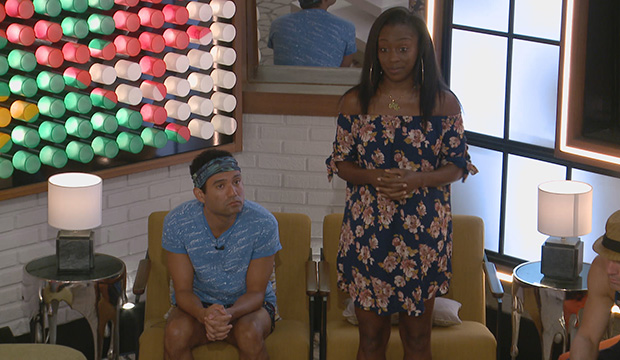 Heading into Thursday’s eviction episode of “Big Brother 22,” Head of Household Memphis Garrett had made peace with the failure of his plan to backdoor David Alexander. Remember he’d nominated David back in week two when he was HOH. Ever since, there has been no love lost between them. Memphis was stymied by Tyler Crispen, who won the Power of Veto but opted not to use it to throw a lifeline to one of the two nominees: Kevin Campbell and Da’Vonne Rogers.

While Kevin called himself the “Big Brother” phoenix, did he rise from the ashes of the eviction vote once again? Despite being an original nominee three times he has only faced the final vote once. One week he won the Veto and in the other it was Da’Vonne who rescued him. But her good karma may be running out. So who was voted out tonight: Kevin or Da’Vonne?

Below, read our minute-by-minute “Big Brother: All-Stars” recap of Season 22, Episode 22 to find out what happened Thursday, September 24 at 8:00 p.m. ET/PT. Then be sure to sound off in the comments section about your favorite houseguests on CBS’s long-running reality TV show, who annoys you the most and who you think will ultimately join the “Big Brother” winners list.

8:00 p.m. — “Previously on ‘Big Brother’!” In the 21st episode, Da’Vonne and Kevin had hoped to save their lives in the game by winning Zingbot’s Veto, but fate had another plan in mind and Tyler prevailed. He chose to keep the noms the same, so now one of these two fan-faves will be headed to the jury house at the end of the hour. Also, who became the latest HOH during this exciting “All-Stars” season?

8:10 p.m. — Following the Veto meeting, the Committee is all pretty suspicious of Dani Briones and Nicole Franzel of working with Da’Vonne and Kevin. Da’Vonne is starting to feel like she’s losing herself in this game and feels like she’s allowed people to walk over her without speaking her mind. She thought being quiet would help her game, but holding herself back hasn’t helped. Dani is upset to lose Da’Vonne this week but doesn’t think she has the votes to save her. Da’Vonne refuses to give Cody Calafiore, Tyler or Enzo Palumbo the satisfaction of campaigning. Meanwhile, Kevin heads to the HOH room to talk with Memphis. Memphis tells Kevin he will be shocked if Da’Vonne stays this week.

8:15 p.m. — Kevin tells Da’Vonne he thinks Nicole was the person who voted out Ian, not David. Da’Vonne refuses to believe Nicole would lie to her and Kevin is getting frustrated. Da’Vonne heads straight to Nicole and asks her again, did she vote to keep Ian? Nicole lies again and Da’Vonne believes her. After Da’Vonne leaves, Nicole whispers to herself, “I’m gonna tell her. I just have to find the right time.”

8:22 p.m. — Out in the backyard, Memphis proposes to Enzo that they create two different final three alliances. This will give them extra safety depending on how things play out. Memphis thinks he could beat Enzo with the jury, which is laughable. I don’t think Memphis could beat anyone. Anyways, not only will Memphis and Enzo create two final three alliances, they will call them the same name. Memphis and Enzo have a final three deal called “The Wise Guys” with both Cody and Christmas. Christmas’ most loyal allegiance is still with Tyler, but she is happy to have another opportunity fall in her lap if Tyler gets voted out.

8:25 p.m. — Dani is campaigning to Christmas to keep Da’Vonne in the house. She tells Christmas that Da’Vonne isn’t coming after them and Kevin is better at competitions. What Dani doesn’t know is that Christmas has more loyalty to the guys in the house than Dani. Christmas does not want Dani to have an extra ally in Da’Vonne, plus she holds some weird grudge against her. Christmas runs up to Memphis’ room to tell him they can pull in David to target Dani and Nicole, so they won’t have to target them.

8:30 p.m. — Christmas pulls David aside and asks if he’d be willing to work with her. She tells David he’s safe until the Top 8. She also reveals to him that Dani and Nicole set him up to be the fall guy for Ian’s eviction. It seems like Christmas has David wrapped around her finger. This is the first time one of the “cool kids” shared actual game information with him.

8:42 p.m. — It’s time for the live vote and eviction. Da’Vonne pays homage to the strong black women to have played “Big Brother” and reminds everyone that after 21 seasons, nobody that looks like her has ever won. She then reminds the house that she will remember who stabbed her in the back and who had the respect to stab her in the front. Jury management matters! Kevin gives a forgettable speech and then the house evicts Da’Vonne by a vote of 5-2. Dani and Nicole were the votes to keep Da’Vonne.

8:59 p.m. — It’s time to have a little fun and see Julie’s latest surprise for the houseguests! Dr. Will Kirby is shown from the neighbor’s house and says it will be fun to put his own little spin on the game. For the next HOH competition and Veto competition the players can go for power or prizes. Oh, and Dr. Will does live right next door so they will be seeing him again. Oh, and by the way, next Thursday is a triple eviction!