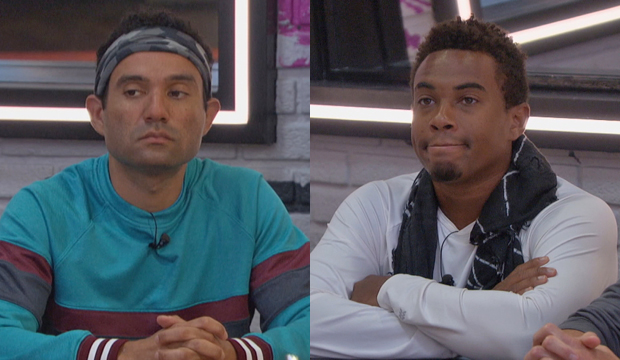 He’s baaack! No, we’re not talking about new “neighbor” Dr. Will Kirby, winner of “Big Brother” Season 2. We’re referring to OTEV, the riddle-obsessed creature who returns every summer to host a Veto competition. Heading into Wednesday’s episode, Kevin Campbell and David Alexander had both been nominated for eviction by Head of Household Cody Calafiore. But OTEV held the power to save one of them, depending on who won the musical chairs-esque challenge. So did the Veto end up removing either Kevin or David from the chopping block?

Below, read our minute-by-minute “Big Brother: All-Stars” recap of Season 22, Episode 24 to find out what happened Wednesday, September 30 at 8:00 p.m. ET/PT. Then be sure to sound off in the comments section about your favorite houseguests on CBS’s long-running reality TV show, who annoys you the most and who you think will ultimately join the “Big Brother” winners list.

8:00 p.m. — “Previously on ‘Big Brother’!” In the 23rd episode, everyone wondered which two players cast hinky votes to keep Da’Vonne Rogers in the game (it was Nicole Franzel and Dani Briones). The remaining nine contestants then geared up for a golf-inspired HOH competition, where they could opt to play for power or for money. Dani and Tyler Crispen both took home $5,000 cash, while Cody won his second HOH comp of the season. How will tonight’s Veto shake up the game, if at all? Let’s go!

8:05 p.m. — Following the nomination ceremony, Cody confirms Kevin is his target but he has no problem gunning for Christmas Abbott if Kevin or David come off the block. Over in the bedroom, Dani tells Nicole she wants to play in the Veto so she can win more prizes and throw the competition to Kevin or David. Dani wants Christmas to go home but Nicole no longer wants to go along with Dani’s plans. The women are continuing to go after each other while the men dominate the game around them. Meanwhile, Christmas tells Memphis Garrett that she’s concerned about being a replacement nominee.

8:10 p.m. — Kevin tells David about his conversation with Cody, which confirmed Kevin is the target this week. David is slightly relieved he’s not the target, but he still feels like he has to win the Veto to be safe. Enzo Palumbo encourages David to play hard. Enzo is tired of his alliance targeting the same players week after week and he wants a bigger target to go home. He’d be thrilled if Kevin and David both stay in the game this week.

8:20 p.m. — Nicole and Christmas are talking about how a “war is about to start” in the house. Nicole tells Christmas she has her back and shuts people down when they target her. Nicole says that Dani is targeting Christmas. Nicole wants to sacrifice her friendship with Dani to solidify her place within the alliance. She wants Dani to be the target. Why would anyone want to target Cody, Memphis, Tyler or Enzo? Now Christmas is more determined than ever to get Dani evicted from the house. It’s ridiculous. It’s like these three are begging to be dragged to the end so they can lose $500,000 in a unanimous vote.

8:30 p.m. — Cody thinks a Texan is an animal. He never knew people from Texas were called Texans. Anyways, it’s time to pick players for the Veto competition. Joining Cody, David and Kevin are: Nicole (drawn by Cody), Tyler (drawn by Kevin) and Enzo (chosen by David after he drew Houseguest’s Choice). Christmas storms off in a huff because she wasn’t picked to play. Cody, Tyler and Memphis run to console her because she’s acting like a complete baby. Dani tells Cody that Christmas is ridiculous and so “over the top.” I’m with Dani on this one. Meanwhile, Cody and Memphis want to keep the nominations boring, I mean the same, and send Kevin home. Enzo pretends to go along with them, but he’s dying for something interesting to happen in the game. I think he’s the only person in the house who realizes how excruciatingly boring this season has been for viewers at home.

8:55 p.m. — It’s time for the Veto competition! It’s a classic OTEV comp and it’s a psychedelic salamander version. All his bitchin’ tie-dyed t-shirts are missing so he will rattle off clues and send houseguests scurrying after t-shirts with the names of two evicted houseguests. The last player to return the correct t-shirt will be eliminated. As an extra incentive, some of the t-shirts will be worth $10,000. The order of elimination is: David (he chose to win $10k instead of potentially eliminating Cody and taking himself off the block), Tyler, Kevin, Nicole (she couldn’t climb the rope), and Enzo. Cody wins the Power of Veto and basically ensures the nominations will stay the same.

8:59 p.m. — It’s time for the Veto meeting and Cody decides NOT to use the Power of Veto. Kevin is the target, but David really rubbed people the wrong way by going after $10k instead of the Veto. Perhaps that could be Kevin’s saving grace? Doubtful, but it’s possible. David or Kevin will be Juror #3 on Thursday, but Jurors #4 and 5 will be quickly following him out the door in tomorrow night’s two-hour triple eviction!