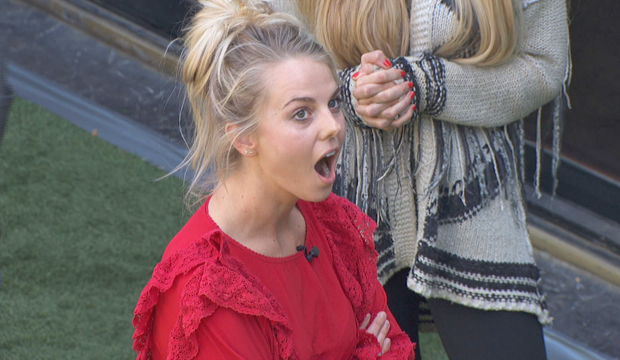 Grab the popcorn, “Big Brother” fans, because we’re about to experience something we’ve never seen before: a triple eviction.

Heading into Thursday’s two-hour live episode, Kevin Campbell and David Alexander had both been nominated for eviction by Head of Household Cody Calafiore. After Cody won the OTEV Veto challenge he chose to keep his noms the same, meaning one of the two guys would be sent to the jury house first during the historic triple. But how did the rest of the episode play out? Did the Committee members finally turn on themselves, or did they successfully make it into the Final 6?

Below, read our minute-by-minute “Big Brother: All-Stars” recap of Season 22, Episode 25 to find out what happened Thursday, October 1 at 8:00 p.m. ET/PT. Then be sure to sound off in the comments section about your favorite houseguests on CBS’s long-running reality TV show, who annoys you the most and who you think will ultimately join the “Big Brother” winners list.

8:00 p.m. — “Previously on ‘Big Brother’!” In the 24th episode, Kevin gave his all in the Veto competition to try to save himself, while David instead chose to go for the $10,000 prize money. “Oh my goodness, did I make a mistake?” David later wondered after Cody informed him about how his move could be seen by the others. But enough about last night’s episode. Let’s focus on tonight’s triple eviction, where the cast of nine houseguests (Kevin, David, Cody, Enzo Palumbo, Tyler Crispen, Christmas Abbott, Memphis Garrett, Dani Briones and Nicole Franzel) will soon be whittled down to just six. Let’s go!

8:08 p.m. — Following the Veto meeting, Cody confirms he didn’t want to use the Veto because he didn’t want to replace a nominee with a member of the Committee. Drawing first blood within the alliance would put a target on his back. David heads up to the HOH room where Cody berates him for taking $10k while he was on the block. Cody wants David to stay in the game, but he’s upset he went for the money so Cody feels the need to make David feel like garbage. Later Kevin approaches Cody to apologize for his abrasive tone in their earlier conversation (“The world doesn’t revolve around you, Cody.”) Kevin’s groveling appears to work and now Cody is second-guessing who he wants evicted.

8:15 p.m. — Dr. Will appears on the living room TV warning the houseguests they better start thinking three moves ahead. Of course this is a clue about the upcoming triple eviction and the houseguests are scrambling. Dani gets nervous and tells Nicole the game is definitely about to speed up. David and Memphis seem to be the only two that are certain a triple eviction is coming. Meanwhile, Cody and Enzo are plotting who should go next. Currently, Christmas and Tyler seem to be high on their hit list. Later, Dani tells Cody she’s terrified of Christmas winning HOH during a triple eviction. Downstairs, Tyler tells David that Nicole and Dani have to be evicted after Kevin. It’s about to get dirty!

8:20 p.m. — It’s time for the first eviction of the night! Kevin and David both plea to stay in the game, but how will the house vote? By a vote of 6-0, Kevin has been evicted.

8:40 p.m. — It’s time for the nomination ceremony. Memphis has decided to throw David and Nicole on the block. It’s finally time for the Committee to start eating their own.

8:50 p.m. — Dani, Tyler and Christmas were drawn to play in the Veto competition along with Memphis, David and Nicole. Players will make their way across a balance beam and solve a puzzle. The first All-Star to correctly complete their puzzle, make their way across the balance beam and buzz in, will win the Veto. Christmas and Nicole appear to be racing to the finish line, but I don’t think Nicole’s puzzle was solved correctly. Christmas has won the Power of Veto! Will she use it? Nicole is pleading with Christmas not to vote for her if she decides not to use the Veto. When Christmas asks who she should suggest as a replacement nominee, Nicole gives NO answer. That alone would cause me to question her true loyalty and leave her on the block. Even when Nicole begs for her life in the game she refuses to give up information. I say that as if it’s a bad thing, but it’s probably why she’s won this game before.

8:55 p.m. — It’s time for the Veto meeting. Christmas has decided NOT to use the Power of Veto. Nicole or David will be the next houseguest to leave the “Big Brother” house.

9:05 p.m. — It’s time for the second vote and eviction of the night. The houseguests’ jaws drop when they realize tonight will actually be a triple eviction. Everyone looks terrified and I love it! By a vote of 3-2, David has been evicted. Tyler and Christmas voted to evict Nicole so that puts a nice target on their backs.

9:15 p.m. — The houseguests are still convinced there is no way a triple eviction could be live. They think it’s just a speed week. They’re in for a surprise! Finally Julie confirms it and everyone nervously laughs (except Dani who stays completely stone-faced as usual).

9:25 p.m. — It’s time for tonight’s second HOH competition. As the outgoing HOH, Memphis is not eligible to compete. In “It’s All About You” Julie asks more True or False questions, but this time it’s about things that happened in the house earlier this season. The last houseguest standing will be the new HOH. After one question nobody is eliminated. After two questions Enzo, Dani and Nicole are eliminated. After three questions nobody is eliminated. After four questions Christmas and Cody are eliminated. Tyler is the new HOH. Heading into the commercial break we see Dani and Nicole pleading for Tyler not to go after them, but he most likely will. Finally there’s some drama in this game!

9:30 p.m. — It’s time for the nomination ceremony. Tyler has decided to put Dani and Nicole on the block. Nicole looks petrified. Dani looks like she’s about to cut Tyler’s throat. I love that Dani owns her anger.

9:40 p.m. — It’s time for the Veto competition! With only seven houseguests remaining, everyone but Memphis is playing. In “Feet to the Fire,” players race across the balance beams and transfer one piece at a time, back to the starting position and recreate it. Christmas won the Veto that was incredibly similar to this earlier tonight. Will she prevail again? No, she fell off the beam and has been eliminated. Nicole was the next to tumble, eliminating herself. Alas, Tyler completes the task first and wins the Power of Veto.

9:45 p.m. — At the Veto meeting, Tyler has chosen NOT to use the Power of Veto. Either Dani or Nicole will become the third evicted houseguest and Juror #5.

9:50 p.m. — It’s time for tonight’s third vote and eviction. Nicole cries during her speech and basically says nothing, no surprise. Dani puts Tyler and Christmas on blast and assures the house she’s gunning for them if they keep her. Despite all her fire, Dani is evicted by a vote of 4-0. She hugged everyone but Christmas and Tyler on her way out, to which Christmas said, “So I guess it’s gonna be personal!” Tyler said Dani was the best player he’s ever played against.

9:59 p.m. — Just a heads up, the next episode is on Monday, October 5, not Sunday. Also, Julie confirmed that no evicted houseguest will be returning to the house. Christmas, Cody, Enzo, Memphis, Nicole or Tyler will be this year’s winner. That’s a wrap for tonight!