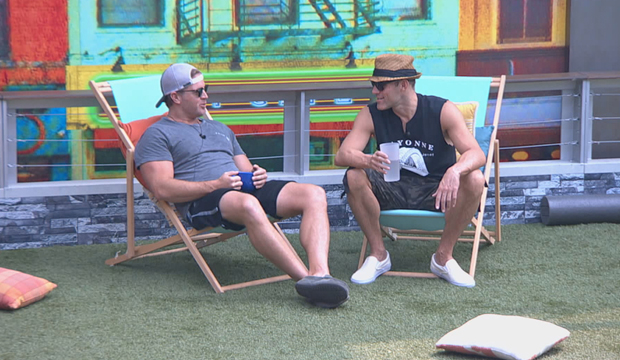 After last week’s dramatic triple eviction, only six people remained in the “Big Brother” house: Cody Calafiore, Enzo Palumbo, Memphis Garrett, Christmas Abbott, Nicole Franzel and outgoing Head of Household Tyler Crispen. A new week meant a fresh opportunity for somebody to claim power and shake up the game, so who proved victorious during Monday’s all-important HOH competition? And which two houseguests did they nominate for eviction?

Below, read our minute-by-minute “Big Brother: All-Stars” recap of Season 22, Episode 26 to find out what happened Monday, October 5 at 8:00 p.m. ET/PT. Then be sure to sound off in the comments section about your favorite houseguests on CBS’s long-running reality TV show, who annoys you the most and who you think will ultimately join the “Big Brother” winners list.

8:00 p.m. – “Previously on ‘Big Brother’!” In the 25th episode, Julie Chen Moonves made history when she hosted the first-ever triple eviction. By the end of the two live hours, three houseguests had been voted out by their competitors: Kevin Campbell, David Alexander and Dani Briones. Only Dani’s eviction was somewhat a surprise, as she was betrayed by her Committee alliance with a unanimous vote. Will the power shift in the house thanks to tonight’s HOH comp? Let’s go!

8:04 p.m. – With Dani’s eviction, Memphis declared that “The Committee” was officially “done.” At the same time, Nicole experienced an emotional attack due to the stress she felt during the triple eviction, requiring Cody to pump her up and get her head back in the game.

8:06 p.m. – Because we didn’t get to see much of the strategy that played out during the triple eviction, we finally got to see the hyper-strategy that took place during the Memphis reign of the night. Privately, Christmas and Tyler planned their move to take a strike against Nicole instead of David, but (as we know) their attempt to pull Enzo to their side for the vote failed and their fruitless power move was laid bare for all to see.

8:09 p.m. – The 3-2 vote against David was an obvious attempt by Christmas and Tyler, but as Tyler said it’s a shot and they missed which is potentially going to take the two of them from the top to the bottom. Enzo knew that sticking with the other players would throw those two under the bus and make him look loyal without making any waves. Nicole was most upset by it (rightfully so) and it showed Dani what she already suspected: that Christmas and Tyler have a final two deal with each other. That being said, Christmas declared that she’s “good in survival mode” and she was ready to face it all head on.

8:16 p.m. – Like Nicole, Tyler hit an emotional bottom during the live episode, but over the loss of his friend David and in part because it was the first time ever in his BB career that he was on the wrong side of the vote. Winning the second HOH was an important step for him toward repairing the damage done and his chance at getting revenge against Dani for putting him on the block earlier in the season. Once he won’t he veto he knew he’d have to make Nicole feel good about remaining on the block so that she wouldn’t harbor ill feelings toward him once Dani was gone.

8:19 p.m. – We know based on Dani’s eviction interview that she was shocked Cody voted to evict her, but that’s because he told her that he’d vote to keep her. While the voting was underway, Dani made more waves with the players by threatening them and reinforcing her belief that Tyler and Christmas were working together as a pair.

8:22 p.m. – After the evictions, Tyler tried to smooth things over with Nicole by saying that he had her on the block simply because of her association with Dani and because Nicole never came to him with the information Dani was using against him. Nicole wasn’t buying it and privately told us that she does not trust Tyler.

8:27 p.m. – With the triple eviction behind them (and us), Tyler hosted the next HOH comp for the other five. In the BB Yoga Studio, the players had to do strip off their yoga clothes while holding buttons in a yoga position. The comp was played in four single-elimination rounds. In the first round Christmas made the fatal mistake of leaving her shirt on after hitting the button, giving her the lowest score.

8:33 p.m. – In the second round, Nicole struggled to get her final clothing item off and so she scored the lowest and was eliminated. On the sidelines, Christmas was hoping for a Memphis win and Nicole was hoping for a Cody or Enzo win. When Enzo was eliminated in the third round, that left one player each for the women to root for.

8:43 p.m. – In the final round, Memphis was feeling safe even if Cody beat him, but Cody was determined to win in order to keep certain players safe. Memphis was brazen with his movements, giving Cody the chance to slow it down and make sure he did it right so that he could secure his third HOH win!

8:45 p.m. – Immediately, Christmas knew she’d see the block for the first time and Tyler was worried that Cody would believe Dani’s assertion that he’s working closely with Christmas and put him on the block next to her. Christmas was a little miffed at Tyler for leading her to believe that he had Enzo’s vote against Nicole secured and so she felt comfortable enough to try to evict her. Nicole was very annoyed at both of them for trying to come for her and Enzo was working overtime to throw them under the bus for trying to flip him against her. With both of them in Cody’s ear, it was clear what direction Cody was likely going with his nominations.

8:49 p.m. – Memphis declared his loyalty to his Wise Guys alliances and was aiming for Cody to go after Tyler. He tried to assure Christmas that the house would wind up going against Tyler instead of her and reminder her that Nicole is now on everyone’s radar as well. When Christmas attempted her own strategy session with Cody, it proved difficult because he was “like” dodging the conversation all over the place “like” he wasn’t even interested in “like” working with her anymore. 100%.

9:00 p.m. – In his own chat with Cody, Tyler decided that he’d be willing to throw Christmas under the bus in order to save himself. The guys bonded over how often Christmas had played games with their heads throughout the season. Cody promised Tyler that he wouldn’t let him go during his HOH and that he “loves” him. At this point, Cody was concerned with making sure that Tyler will remain his ally as long as he’s in the house.

9:02 p.m. – After the conversation, Christmas made her attempt to put the blame for the Nicole vote on Tyler in an attempt to save her own reputation. Christmas said she feels “blindside and duped” by Tyler for that vote and Cody did all he could to reassure her, but the two conversations just showed him that neither of them is trustworthy.

9:05 p.m. – As expected, at the nomination ceremony Cody nominated Tyler and Christmas for eviction. He told them that he likes them and respects them, but that it came down to his gut feeling about the vote against Nicole. At this point in the game, nominations barely matter as everyone gets to play for POV and that is truly the only way to secure your own safety. We’ll see how that plays out on Wednesday.