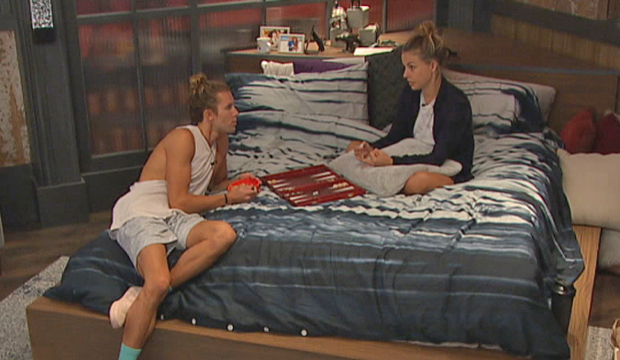 Heading into Wednesday’s Veto episode of “Big Brother,” new Head of Household Cody Calafiore had nominated both Tyler Crispen and Christmas Abbott for eviction. It was a sort of reckoning for the Committee alliance, which dominated the entire season but now must start eating each other. Dani Briones was the first Committee member to get the boot (during the triple eviction). Will Tyler or Christmas be next, or did the Veto save one of them from the chopping block?

Below, read our minute-by-minute “Big Brother: All-Stars” recap of Season 22, Episode 27 to find out what happened Wednesday, October 7 at 8:00 p.m. ET/PT. Then be sure to sound off in the comments section about your favorite houseguests on CBS’s long-running reality TV show, who annoys you the most and who you think will ultimately join the “Big Brother” winners list.

SEE‘Big Brother 22’ spoilers: Cody changing his target is the only remotely exciting thing this week

8:00 p.m. — “Previously on ‘Big Brother’!” In the 26th episode, audiences saw the fallout from the triple eviction, with lots of focus on how Tyler and Christmas tried to sway Enzo Palumbo into voting out Nicole Franzel instead of David Alexander. Enzo didn’t go along with them, which made Tyler and Christmas pariahs within their alliance. During the striptease HOH competition, it all came down to Cody vs. Memphis Garrett, with Cody ultimately prevailing. How will tonight’s Veto shake up the house, if at all? Let’s go!

8:08 p.m. — Following the nomination ceremony, Cody is determined to keep Tyler and Christmas on the block because he has final two deals with everyone else left in the house. Nicole slithers up to the HOH room to tell Cody she hates Tyler and Christmas and doesn’t care who goes home. She’s furious that they’re playing the game and tried to evict her. At this point Cody is leaning towards sending Christmas out the door because he’s closer to Tyler.

8:15 p.m. — Christmas and Tyler have had a final two deal since early in the game, but with both of them on the block it’s every person for themselves. They both plan to fight to stay. Enzo gloats to the cameras about what a perfect game he’s playing, and to be honest, he’s right. Enzo is pulling strings and making moves without getting an ounce of blood on his hands. In my opinion Enzo is playing the best game in the house. Meanwhile, Christmas starts sobbing while telling Cody she isn’t taking her nomination personal. Cody is bored and has zero interest in listening to Christmas cry.

8:18 p.m. — We get a rare look at the emotional side of Memphis when he discusses the death of his father and how that relationship impacted his relationship with his own son. Tyler’s father also passed away after instilling in him “Big Brother” fandom. Tyler cries while thinking about how much that impacted his life.

8:24 p.m. — Christmas is sure Cody and Nicole are working together. She also feels betrayed by Enzo after he hung her and Tyler out to dry last week. For that reason, Christmas’ only option is to solidify her relationship with Memphis. He’s happy to make her think she’s a priority for him. Next, Tyler pulls Enzo aside to expose the Committee. Enzo acts surprised, but actually finds it hilarious because he’s known about the Committee for weeks. He promises Tyler he will gun for the Veto, but Enzo has no plans on using it to save Tyler.

8:42 p.m. — It’s time for the Veto competition! One at a time the players go into the backyard and feel like they’ve been transported to a baseball game. They will have to arrange photos of their former housemates at a baseball game in chronological order, based on clues within the photos themselves. The player to arrange the cards correctly in the fastest time will win the Power of Veto. Enzo is particularly horrible at this game and doesn’t understand that he should be paying close attention to clues within the photos, such as how much of Bayleigh Dayton‘s hot dog has been eaten, how much beer Keesha Smith drank, etc. After each player has had their chance to compete, their times are revealed. Both Tyler and Enzo timed out, never figuring out how to arrange the puzzle. Cody has won the Power of Veto with a blistering time of 4:57.

8:50 p.m. — Christmas pulls Enzo aside in hopes of getting his vote, knowing Cody is unlikely to use the Veto. She immediately throws Tyler under the bus, calling him shady. Enzo runs upstairs to tell Cody that Christmas is throwing Tyler under the bus and that Tyler told him about the Committee. Cody is upset to hear Tyler is spreading facts so now Tyler could be his next target. Aside from his abysmal Veto performance, this episode is showing some great gameplay from Enzo.

8:59 p.m. — Tyler heads up to the HOH room for a final plea to Cody. He says he’s going home if Cody doesn’t pull him off the block. He tells Cody that if Christmas stays in the house she’s targeting Cody and Nicole. Tyler would like Cody to use the Veto on him and put Memphis up as a replacement nominee. Ultimately, Cody decides NOT to use the Power of Veto. Either Tyler or Christmas will be heading to the jury house on Thursday.