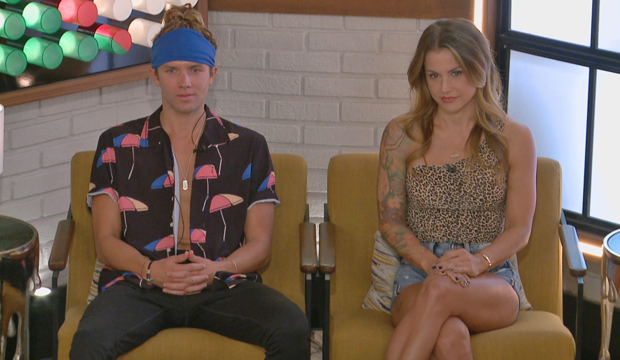 Last week on “Big Brother” the Committee alliance was finally forced to turn on itself, unanimously voting out Dani Briones during the triple eviction. Now either Christmas Abbott or Tyler Crispen will be the next person evicted from “All-Stars” and sent to the jury house, joining Dani, David Alexander, Kevin Campbell, Da’Vonne Rogers and Ian Terry. So how did Thursday’s live episode play out, and who ended up having a socially distanced conversation with Julie Chen Moonves?

Below, read our minute-by-minute “Big Brother: All-Stars” recap of Season 22, Episode 28 to find out what happened Thursday, October 8 at 8:00 p.m. ET/PT. Then be sure to sound off in the comments section about your favorite houseguests on CBS’s long-running reality TV show, who annoys you the most and who you think will ultimately join the “Big Brother” winners list.

SEETyler Crispen (‘Big Brother 22’) on potential eviction: ‘It’s not over yet’

8:00 p.m. — “Previously on ‘Big Brother’!” In the 27th episode, Head of Household Cody Calafiore proved his dominance yet again by claiming the Veto medallion. Obviously, he chose not to use it, so now one of his two nominees — Christmas or Tyler — will be sent packing. Elsewhere in the episode, Cody cemented his bonds with Nicole Franzel and Enzo Palumbo while on the other side of the house both Christmas and Tyler fought to stay alive. Who will be evicted next? Let’s go!

8:10 p.m. — Following the Veto meeting, Cody confirms he chose not to use it because it would be a terrible game move. He has final two deals with everyone else. At this point Tyler is the target but he thinks he can convince Memphis and Nicole to keep him. Up in the HOH room, Enzo, Cody and Nicole are furious that Christmas isn’t depressed and wallowing in despair. How dare she enjoy herself in this house! Meanwhile, Tyler tries to campaign with Memphis, but Memphis is a straight shooter. He tells Tyler straight to his face that he’s not keeping him in the game because he’s a strong competitor. That may be Memphis’ best asset. Even though he’s a total jerk, at least he’s straight up with people.

8:15 p.m. — Memphis and Cody are talking about Tyler and Christmas. They don’t seem to care who goes home first, but Tyler is definitely the bigger physical threat. Cody knows that Memphis is closer to Christmas than he lets on, but it doesn’t really matter at this point. Tyler is the bigger threat. Later on Enzo heads up to the HOH room to talk to Cody. He tells him that Memphis wants Nicole out bad (which is true). They are stressed out that Memphis could take Christmas to the final two with him. It’s fascinating to me how Cody acts almost offended that other people in the house are playing the game. The audacity! Now Cody is considering teaching Memphis a lesson by sending Christmas home this week.

8:25 p.m. — We get to see the first glimpse in the jury house! Ian is hanging out with the turtles in a pond when Da’Vonne shows up. She brings Ian the “tea” and warns him it’s “gonna burn his lip.” They compare their alliances and realize Dani is the common thread. At this point they think Dani is the best player in the house and running the game. Da’Vonne tells Ian that Nicole betrayed him, but Ian doesn’t really care. A week goes by and Da’Vonne and Ian have no clue they’re about to get three new roommates. Kevin shows up first and David comes in shortly after. Da’Vonne and Ian expected these two jurors to join them, but they’ll be shocked by who walks in the door next!

8:35 p.m. — Finally Dani walks into the jury house and Da’Vonne screams. The jury seems genuinely upset Dani came through the door and I now realize how good of a shot Dani had at winning this. It was a wise move to evict her. Dani knows she’s in the jury house because she was playing a better game than Nicole and Nicole isn’t a threat. Dani cries when she shows up and clearly hasn’t recovered from Cody’s betrayal. The next morning she shows her fellow jurors video footage of how she arrived. Dani is SUPER salty with Nicole right now and she has every right to be. Nicole has been throwing her under the bus for weeks. It’s clear to the jury that Nicole just wants to be the last girl in the house, just like the season she won. Dani is heartbroken and disappointed in herself, but she’s not bitter and still thinks Cody deserves to win.

8:42 p.m. — It’s time for the live vote and eviction! Christmas gives a boring speech and then Tyler gushes over his girlfriend at home. It’s nauseating. Finally it’s time to vote. Enzo, Nicole and Memphis all vote to evict Tyler. For the first time ever, the “Big Brother 20” runner-up has been evicted.

8:59 p.m. — It’s time to begin another HOH competition. As the outgoing HOH, Cody is not eligible to compete. In “Stashing Pumpkins,” players make their way from their start position to a container filled with “pumpkins.” From there they must transfer pumpkins across their teeter-totter, one at a time, to the basket on the other end. If any pumpkins fall to the ground, they must reset all the pumpkins to the original container and start from the beginning. This game will NOT finish during this live episode. Nicole has already said “Are you freaking kidding me?” so it’s gonna be a long night. We’ll find out who win on Monday’s episode. That’s a wrap for tonight!