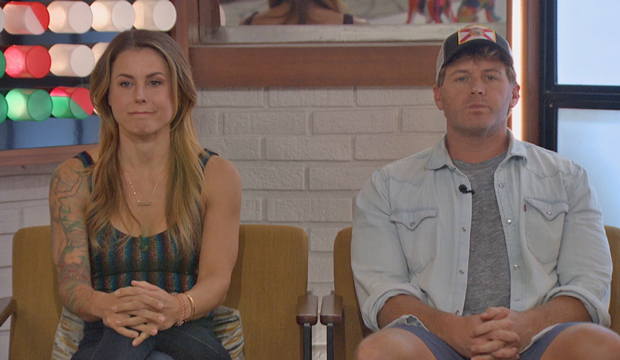 Heading into Thursday’s live episode of “Big Brother 22,” Head of Household Nicole Franzel had just won the Veto and locked in her two nominees for eviction: Memphis Garrett and Christmas Abbott. That meant the other two players would be the only voters this week: Cody Calafiore and Enzo Palumbo. Even though Cody and Enzo had told Nicole they would abide by her wishes and vote out Memphis, they secretly wanted to send Christmas to the jury house. So did they end up going through with their plans and betraying Nicole?

Below, read our minute-by-minute “Big Brother: All-Stars” recap of Season 22, Episode 31 to find out what happened Thursday, October 15 at 8:00 p.m. ET/PT. Then be sure to sound off in the comments section about your favorite houseguests on CBS’s long-running reality TV show, who annoys you the most and who you think will ultimately join the “Big Brother” winners list.

SEEYes, Cody (‘Big Brother 22’) is considering betraying Nicole: ‘I need to figure out what’s best for me’

8:00 p.m. – “Previously on ‘Big Brother’!” In the 30th episode, the final five players took part in “BB Comics,” a classic Veto competition in which they had to notice slight differences in cartoonish drawings. Nicole dominated the competition and came away with her first Veto win of the summer. Her two nominees, Christmas and Memphis, hoped she would use the power to remove one of them and backdoor Cody, but in the end she kept her noms the same. Who will be the next member of the jury house? Let’s find out!

8:10 p.m. — After the Veto meeting, Nicole confirms there is no benefit to her putting Cody or Enzo on the block. Christmas and Memphis still think the other is going home.  Nicole and Christmas are chatting outside and Nicole reassures Christmas that she’s safe this week. Meanwhile. Memphis is playing a game of pool with Cody and tells him Christmas wants to backdoor him. Cody isn’t buying it because Nicole already told him that Memphis tried to get in on this backdoor plan as well. At this point Cody wants to send Memphis to the jury house.

8:15 p.m. — Memphis tells Enzo that if Nicole makes it to the final two she will win. They realize that it would be an incredible accomplishment to make it to the final 2 as a former winner, so why go to the end with her? Enzo seems to think it would be better to keep Memphis at this time. Enzo expresses his opinion to Cody, who disagrees. Enzo knows that Nicole will benefit more than him from keeping Christmas in the house. He has an idea to split the vote this week, forcing Nicole to get blood on her hands by casting the deciding vote for who goes to jury.

8:25 p.m. — We get another glimpse into the jury house to get an idea what they’re thinking. Dani Briones admits that she think Tyler Crispen would be a good winner, even though he got her evicted. Moments later he arrives in the jury house. He shows him the video of Cody getting him evicted and the jury is further impressed by Cody. He has a final two with Enzo, Memphis and Nicole. Impressive. At this point, Cody is owning this game with the jury. They want to vote for Enzo, but they realize Cody is running the game.

8:35 p.m. — The jurors are surprised with DVDs from home. Everyone cries and is happy to hear messages from their loved ones, even though they’ve all lost the prize.

8:59 p.m. — It’s time for the HOH competition. As the outgoing HOH, Nicole is not eligible to compete. Kaysar Ridha makes an appearance, letting them know they’ll be playing “Knight Moves,” one of Kaysar’s most memorable “Big Brother” moments. The winner of this HOH will guarantee themselves a spot in the finale. Apparently we’ll see the results on Sunday. That’s a wrap for tonight!