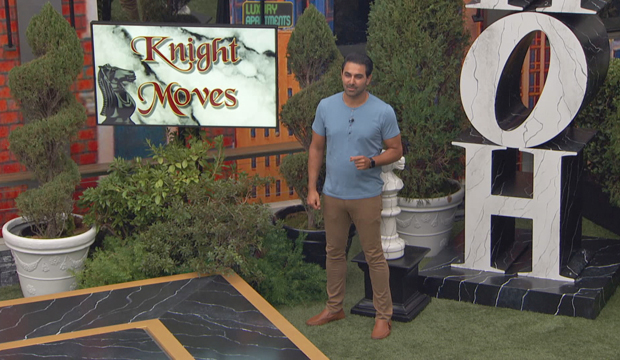 Following the eviction of Memphis Garrett from “Big Brother 22,” the remaining four houseguests watched as their old All-Star buddy Kaysar Ridha introduced the next Head of Household competition, a classic chess-like game called “Knight Moves.” Outgoing HOH Nicole Franzel was not eligible to compete in the challenge, which meant the winner would either be Cody Calafiore, Enzo Palumbo or Christmas Abbott. So who ended up claiming the HOH key for Final 4 week and which two players did they nominate for eviction?

Below, read our minute-by-minute “Big Brother: All-Stars” recap of Season 22, Episode 32 to find out what happened Monday, October 19 at 8:00 p.m. ET/PT. Then be sure to sound off in the comments section about your favorite houseguests on CBS’s long-running reality TV show, who annoys you the most and who you think will ultimately join the “Big Brother” winners list.

SEEMemphis Garrett (‘Big Brother 22’) exit interview: ‘There’s no hard feelings’ and ‘I would have taken Enzo to the end’

8:00 p.m. – “Previously on ‘Big Brother’!” In the 31st episode, both Memphis and Christmas tried to convince the rest of the house to keep them in the game. The only two voters were Cody and Enzo, and they ended up abiding by Nicole’s wishes and cutting Memphis. “I was definitely blindsided,” he told Julie Chen Moonves, referencing the fact that he had deals with both of the guys. With Memphis’ eviction the Final 4 has been set, so who will win HOH and automatically advance to the Final 3? Let’s go!

8:03 p.m. – Ahead of the HOH comp, Nicole was pumping up Enzo and Cody to win so that they could “secure [their] spot” and was privately gloating over the notch her belt of sending Memphis home on his first ever time on the nomination block in his entire BB history. Not sure the jury will be as impressed by that move as she thinks they will be.

8:05 p.m. – For the comp, the three houseguests could only move across a chess board as a knight does: three spaces across and one to the side. In each spot they land the tile piece would be flipped over, making it blocked from being landed on in the future. The last player with a valid move to make would become HOH.

8:07 p.m. – The way this game works made it easy for Cody to develop a strategy that would box Christmas in in order to get her out quickest. Christmas got to choose her starting point first and she chose a corner. Cody chose his next and started seriously close to her, making it clear that he wasn’t playing with a strategy other than impeding her way. Enzo followed suit and made his first moves in her direction as well.

8:09 p.m. – Early on Christmas noticed that Cody was clearly boxing him in and then Cody became frustrated once Enzo made moves away from her instead of toward her. From Enzo’s perspective, he had both of them thinking he was working with them so he was doing his best to let them battle each other and to stay completely out of it.

8:16 p.m. – With Christmas and Cody closing in on each other, Enzo kept moving into space that afforded him more room to play. Nicole took notice of Enzo’s style and chalked it up to Enzo only playing for Enzo’s well-being and that if he doesn’t even care about Cody’s game then he certainly doesn’t care about her’s.

8:18 p.m. – Eventually Cody ran out of spots and was eliminated, knowing that he was leaving Christmas with only one move to make. Sure enough, she was eliminated after that move and so Enzo became HOH.

8:24 p.m. – Despite feeling like Enzo winning was one of the outcomes Nicole wanted, the way he played “showed his true colors” to her and so we was visibly upset. Cody was also frustrated, but he was cooler at playing it off as no big deal. Christmas told Nicole that Enzo winning is a good thing because he knows he can’t beat Cody and so will probably target him for eviction. But that just worried Nicole more because it showed her that Enzo might be working with Christmas above her.

8:27 p.m. – Later Cody and Nicole both told Enzo together that they don’t care who he puts up, including them together, but once Enzo was out of the room they whispered about how mad they are that Enzo didn’t contribute to the attack on Christmas in the comp. That being said, Cody tried to calm Nicole down by pretending like it’s not that big of a deal.

8:28 p.m. – Unlike Cody and Nicole, Christmas made it clear to Enzo that she doesn’t want to go on the block again even though, like he said, it doesn’t matter who goes up because ultimately the Power of Veto comp is all that matters this week. Ultimately, Enzo does not want Christmas to go home because she’s vowing to take him to the final two with her and from his perspective the one that needs to go this week is Nicole.

8:34 p.m. – Even though she was sure Cody was coming after her in the comp, Christmas knew she had to “play nice” with him by “clearing the air” to understand why he was coming after her. He tried really hard to forma convincing argument, but the smile on her face said she didn’t believe a word of it. She (understandably!) was confused why he thought being willing to lose just to get her out was a good strategy for him.

8:39 p.m. – Later, Cody jokingly told Enzo that he sucked at the comp, but Enzo explained that if they both went after her that they would have put themselves at risk. In the conversation Enzo said that he needs Cody to win POV because if he goes home then Nicole is going to take Christmas and she’s becoming a real threat to win. He goes on to convince Cody that if given the chance he should vote Nicole out over Christmas, but Cody laughs that off and makes it clear he’s not gonna do that.

8:46 p.m. – During a “very important”round of small talk with Christmas, Cody was egged into asking her if she ever competed in a high school talent competition which led to her being able to show him the choreography to “Proud Mary” that her and some girlfriends did. Cody was not impressed–actually he was annoyed–but went through with it because he knows that small talk is the only way to succeed in the game. Meanwhile, out back, Nicole had some “small talk” with a can of sunscreen spray that gave her a sneeze attack.

8:52 p.m. – In his HOH room, Enzo told Christmas that he’s scared that she won’t win the POV to get herself safety. In order to keep herself off the block, Christmas made the argument that he should put Cody on the block as a mark on his own resume to say that he’s the one that nominated him this season and that he’s the only finalist that was never nominated.

8:56 p.m. – In a misspelled “The Bragade” shirt at the nomination ceremony, Enzo revealed the photos of Nicole and Christmas. He told them that it’s all about the POV anyway and wished them luck. Nicole vowed that she’s never been more confident about winning a comp than this upcoming POV and Christmas cried because she felt betrayed by Enzo.

WEDNESDAY NIGHT: We find out who wins POV and joins Enzo in the final three!