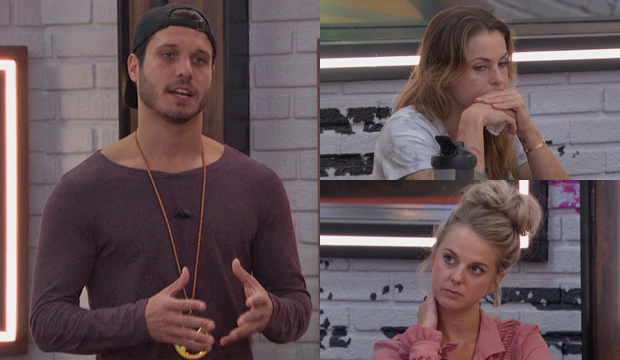 Heading into the final Thursday episode of “Big Brother 22,” both Enzo Palumbo (the Head of Household winner) and Cody Calafiore (the Veto champion) had already advanced to the final three. Cody earned the sole power to evict either Christmas Abbott and Nicole Franzel, and by doing so he’d also be naming the third finalist. Did the Cali-Fury end up sending home Christmas, the person he had no allegiance with but who he could possibly beat in the end, or Nicole, his closest ally in the game but someone he’d have a tougher time winning against?

Below, read our minute-by-minute “Big Brother: All-Stars” recap of Season 22, Episode 34 to find out what happened Thursday, October 22 at 8:00 p.m. ET/PT. Then be sure to sound off in the comments section about your favorite houseguests on CBS’s long-running reality TV show, who annoys you the most and who you think will ultimately join the “Big Brother” winners list.

8:00 p.m. – “Previously on ‘Big Brother’!” In the 33rd episode, the houseguests battled in a “BB Comics”-inspired luxury competition for a $10,000 prize. Nicole ended up winning the game that randomly matched up all 16 players against each other in a bracket-style tournament until only one (Mem-FIST) remained. Later on the final Veto competition was held in the backyard, forcing the contestants to spin on a hamster wheel for the amount of time it took to answer questions related to days in the house. Cody prevailed, which gave him the power to send either Nicole or Christmas to meet Julie Chen Moonves outside the house. So how’d it all play out?

8:10 p.m. – Enzo tells Christmas that he’s trying to keep her in the house. He knows Christmas would take him to the final two and he is starting to realize she’d be his best bet as well. Unfortunately, Cody’s bond with Nicole will be difficult to break. Enzo tells Christmas she can throw him under the bus if she needs to, just say whatever she needs to say to Cody in order to stay. Meanwhile, Nicole is already working on Cody to keep herself in the house. Bragging about holding the record for most days spent in the “BB” house probably isn’t the best strategy, but that’s what she’s doing. Next, Cody and Enzo are hanging out in the backyard and Enzo is trying to convince Cody that Nicole is trying to win over Christmas’ jury vote. He says Christmas would be easier to beat in the end, but Cody doesn’t seem worried. He knows Nicole will take him to the end and Cody is confident he’ll beat anyone.

8:12 p.m. – Christmas is talking to the cameras and says if she goes home this week, she’s going out guns blazing. She’s furious with Enzo after she overhears him talking about himself, Cody and Nicole being the final three. She feels burned by the Meow-Meow and is determined to crush his game.

8:20 p.m. – Christmas pulls Cody aside for a Hail Mary. She tells Cody that Enzo promised to take her to the end and has scorned her multiple times. She also explains that Enzo tricked her into voting for Nicole during the triple eviction. Cody isn’t really phased, but he is starting to realize that if Enzo and Nicole are thinking, they might both start realizing they don’t want to sit next to Cody in the end. Meanwhile, Nicole is on the couch congratulating herself for winning All-Stars. She’s apparently doing some visualization. Later, Cody torments Nicole by joking about cutting her in favor of Christmas. But is he really joking? He knows Christmas would be easier to beat in the end. Nicole is stressed out.

8:30 p.m. – It’s time to check in with the jury house! This is my favorite part of the final episodes each season. While the current jurors sit around the picnic table, Da’Vonne Rogers reveals she’s hoping Enzo stays in the house because she wants him to win. Dani Donato thinks Cody is playing the best game, but Kevin Campbell is bitter and can’t stand Cody. Finally, Memphis Garrett arrives and shocks the others. David Alexander is thrilled to see Memphis arrive, since Memphis had it out for him the entire game. After watching the highlight reel of Memphis’ eviction, the jury is impressed with Nicole’s ability to win the HOH and Veto, but the only way they think she is deserving of the win is if she clips Cody at the final three. Basically, whoever evicts Cody is going to win. It’s Cody’s game to lose.

8:40 p.m. – It’s time for Cody to cast the sole vote to evict Christmas or Nicole. Christmas congratulates Nicole for playing an “impeccable game” and then congratulates Enzo for getting third place (ouch!). She then reminds Cody it’s a mistake to go to the end with a former winner. Then Nicole pleads to stay in the game and tells Enzo he’s funny. Finally, Cody stands up and chooses to evict Christmas. Did he make the right choice?

8:59 p.m. – As a special surprise, Julie lets watch the final three players view videos from home. Cody bursts into tears when his girlfriend gives him a supportive message. Next Cody sees his two children and Nicole gets a nice greeting from her fiance, Victor Arroyo and their two pups. Cody, Enzo and Nicole are excited to get home in less than a week, but first they must battle it out until finale night. That’s a wrap for tonight!