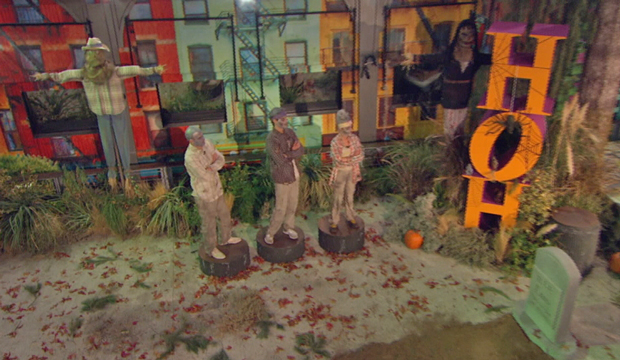 Last week on “Big Brother 22,” Christmas Abbott became the newest member of the jury thanks to Cody Calafiore, who cast the sole vote to evict. In doing so, he also cemented the final three houseguests of Season 22: Nicole Franzel, Cody and Enzo Palumbo. The last week inside the house will be chock-full of competitions, with the first part of the final Head of Household playing out on Monday night. The winner of this comp will advance automatically to Part 3 (which will air live on finale night), where they’ll face off against the winner of Part 2. So who took the early HOH lead during the penultimate “BB22” episode?

Below, read our minute-by-minute “Big Brother: All-Stars” recap of Season 22, Episode 36 to find out what happened Monday, October 26 at 8:00 p.m. ET/PT. Then be sure to sound off in the comments section about your favorite houseguests on CBS’s long-running reality TV show, who annoys you the most and who you think will ultimately join the “Big Brother” winners list.

SEEChristmas Abbot (‘Big Brother 22’) exit interview: ‘I had a good argument’ to beat Cody, Enzo or Nicole at the end

8:00 p.m. – “Previously on ‘Big Brother’!” In the 35th episode, Cody, Enzo and Nicole took a trip down memory lane as they dined on surf and turf and sipped champagne. Among their many memories were some previously unseen moments, including Bayleigh Dayton‘s grueling tricycle punishment, Enzo’s failed attempts at becoming vegan, Cody learning what the word “ripe” meant and Nicole peeing her pants when Enzo pretended to leave the bathroom with toilet paper stuck in his pants. How will tonight’s HOH Part 1 competition change the game? Let’s go!

8:02 p.m. – In a bit of a surprise, Julie Chen Moonves is on deck for the night to steer us through this special episode that also includes commentary from the earliest evictees on who they think should win.

8:04 p.m. – To kick the night off we got a deep dive into Enzo’s journey this season. He dipped his (sexy enough for a stalker) toes in many alliances and relied heavily on his good relationships with everyone in the house to escape the block each week. He knows that he wasn’t in the large alliance that dominated the game, but was protected by them all along because he told each of them what they wanted to hear. Enzo believes that saving Nicole in the triple eviction solidified his trip to the final three, but also realizes that it might be his downfall as well.

8:12 p.m. – Cody calls his first week HOH win the most meaningful aspect of his strategy for the season because it allowed him to make three strong final 2 deals by the second day and of course got him involved in The Committee. He also claims that his strategy coming into the season was to be a triple threat with a strong social, physical and strategic game. Knowing that he was a huge threat and had a lot of power, Cody considers never being nominated as an impressive feat. Going into the final comp, Cody says that he won’t make the same mistake he did last time and will go to the finals with whoever he feels most confident he can beat.

8:22 p.m. – As a former winner, Nicole entered the house knowing that she would be on everyone’s radar. Her plan was to surround herself with strong players that could protect her from going on the block. Nicole’s closest allies were Cody and Ian Terry, and she worked very closely with Dani Briones. She says that her “low profile” strategy all went out the window on triple eviction night when she became the token pawn nominee from her own alliance. After escaping that night is when she decided to raise her profile and start winning comps so that she could protect herself.

8:33 p.m. – In a 5-way zoom session, the first evictees got together to dish the final three and what they think of the season. Janelle Pierzina asked if it was a surprise that they made the final three and everyone agreed that they were expected to do well. Kaysar Ridha said that Cody knew that having his hands in a lot of pots would protect him, while Bayleigh says that Nicole riding his coattails isn’t going to curry much favor from the jury. Keesha Smith respects Cody and says that from beginning to end he has the best game of all three. Nicole Anthony said that Cody is likely going to be chosen by either other finalist, but that if one of them wins the final HOH and then cuts Cody that it will win them the game. She also noted that Enzo’s laid back approach works really well with his social skills and could earn him a win.

8:43 p.m. – For Part 1 of the HOH comp the backyard was turned into a cemetery with the finalists wearing their best zombie drag. Their task? Be the last one standing on the BB Scary-Go-Round, a contraption of three rope swings spinning endlessly in a circle until only one is left. The obstacles included a slam into a haunted house wall, their legs pummeled into a crescent moon, and green witches brew squirting on to them. After a few rough run-ins with the wall, Enzo slipped to his disc and then off the rope to be the first one eliminated. After Enzo fell, freezing rain began to fall from the ceiling, adding to the misery for Cody and Nicole.

8:54 p.m. – The last obstacle added to the comp was a lowering of the ropes which caused them to run into the moon with more of their body and in turn spin them harder into the haunted house wall. Eventually Nicole found a way to lean back on the rope and avoid going too hard into the moon, but because Cody didn’t realize the same thing he continued to be blasted by the two obstacles and eventually lost his footing and the strength to hold on. Cody’s elimination meant that Nicole won and advances straight to Part 3 of the comp to be played live on finale night.