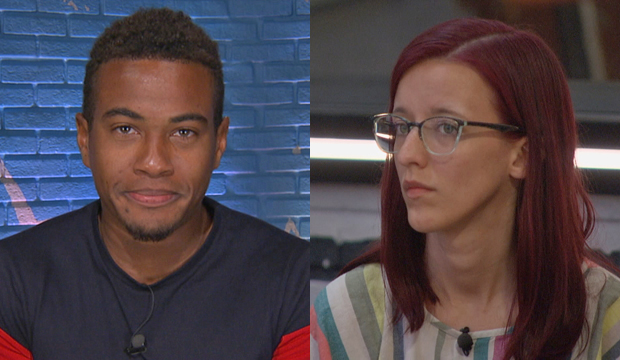 Heading into Wednesday’s Veto episode of “Big Brother 22,” both David Alexander and Nicole Anthony of “BB21” fame had their fingers crossed they’d be able to save themselves from the block. Head of Household Memphis Garrett nominated David because he wanted him to “prove” himself after being the first person sent home last summer, and he picked Nicole because she refused to play in the Safety Suite competition despite his warnings. Did the Power of Veto save either David or Nicole from elimination? If so, who did Memphis nominate in their place?

Below, check out our minute-by-minute “Big Brother: All-Stars” recap of Season 22, Episode 6 to find out what happened Wednesday, August 19 at 8:00 p.m. ET/PT. Then be sure to sound off in the comments section about your favorite houseguests on CBS’s reality TV show, who annoys you the most and who you think will ultimately join the “Big Brother” winners list.

8:00 p.m. — “Previously on ‘Big Brother’!” In the fifth episode, Memphis did his best to make sure as many people played the Safety Suite as possible, so that next week he’d have less competition when he played. In all, seven houseguests took part: David, Christmas Abbott, Bayleigh Dayton, Cody Calafiore, Da’Vonne Rogers, Ian Terry and Kevin Campbell. Christmas won the challenge and made Ian her plus-one for the week, which means he’ll have to endure a punishment. So will tonight’s Veto save either David or Nicole? Let’s go!

8:07 p.m. — Following the nomination ceremony, Dani Briones voiced her frustration with Memphis from the Diary Room, saying she doesn’t respect his game and is annoyed by his “belittling” comments directed at certain houseguests. Nicole A. is in tears and questions her skill set as a player. Meanwhile, Tyler Crispin met up with David in the store room to give him a pep talk. Tyler doesn’t like Memphis either and even though he’s in the same alliance, Tyler would rather work with David. Tyler’s support brought David to tears.

8:10 p.m. — Janelle Pierzina adores Nicole A. and is working to keep her in the house. She tells Nicole this can be fixed and it’s the perfect scenario for a backdoor. Next, Janelle heads up to the HOH room to speak with Memphis and Kaysar Ridha. She asks why Memphis nominated Nicole A. and David, and Memphis lets out an evil laugh. Memphis basically doesn’t think David deserves to be there. Knowing that Memphis doesn’t care whether Nicole A. or David goes home, Janelle points the target to Nicole Franzel in hopes of getting her on Memphis’ radar. Janelle knows Nicole F. is working with Cody, Tyler and Dani, but she doesn’t know Memphis is working with Nicole F. too.

8:20 p.m. — Memphis and Cody are chatting in the HOH room. Memphis is gloating that Janelle and Kaysar tell him everything. Cody is concerned that that they are on to their alliance and brings up the possibility of backdooring Kaysar or Janelle. Memphis isn’t ready to take that shot. Despite Memphis telling Cody not to telling anyone else, Cody immediately runs to Dani and tells her that Janelle and Kaysar are onto them. Next, he tells Tyler and Tyler is more determined than ever to play in the Veto and pull David off the block.

8:22 p.m. — It’s time to pick players for the Veto competition! Joining Memphis, Nicole A. and David are three players chosen by random draw: Ian (drawn by Memphis), Tyler (drawn by Nicole A.) and Nicole F. (drawn by David).

8:30 p.m. — “BB All-Star Wars” appears on the TV and Ian is about to receive his punishment for being the plus-one in the Safety Suite. He will have to perform four major scenes from the film, in full wardrobe, in hopes of winning the role of Dirk Space-Jammer. He receives a costume to get into character, but seems to be a pretty bad actor. He is called to act out his scenes at all hours of the night and is repeatedly berated by the voice coaching him through the speakers.

8:35 p.m. — Tyler tells Memphis that he’s heard Janelle and Kaysar are targeting them. Nicole F. and Christmas join the conversation and Memphis tells them that Janelle wants Nicole F. backdoored. Memphis seems to relish everyone’s discomfort and Nicole F. doesn’t understand why Janelle dislikes her so much. Tyler asks Memphis what the plan is and Memphis says, “I don’t think there is one. Keep everything the same.” This infuriates Tyler and he wants to win the Veto, pull David off the block and force Memphis to show his cards. Nobody trusts Memphis.

8:48 p.m. — It’s just after midnight in the “Big Brother” house and it’s time to play the Veto competition! The game is simple: Players will stand in the center of their star and balance their sphere on the disc. If they drop their sphere, they will be eliminated. The last player standing will win the golden Power of Veto. The order of elimination is as follows: Nicole A., Nicole F., Ian, David and Tyler. Memphis wins the Power of Veto to make it a sweep for the week! Will anyone convince him to take either Nicole A. or David off the block?

8:52 p.m. — Nicole A. is humiliated by her performance and she’s disgusted that Memphis has won. Kevin consoles her in the store room and tells her not to worry about going home. Meanwhile, Nicole F. is freaking out because she’s scared Janelle and Kaysar will convince Memphis to backdoor her. Up in the HOH room, Dani tells Memphis that Janelle and Kaysar are a problem and he should backdoor one of them. She also reprimands Memphis for his condescending tone. Memphis is annoyed that Dani has the audacity to give him suggestions about how to play.

8:59 p.m. — In the store room, now Cody is telling Memphis to use the Veto. Memphis doesn’t think that move is in his best interest, but he doesn’t want his alliance to think he’s disloyal. Finally, it’s time for the Veto meeting. Memphis chooses not to use the Power of Veto. Either Nicole A. or David will be evicted on Thursday night. Dani thinks Memphis is “soft” and making a rookie move. Nicole F. hates working with Memphis and doesn’t think they have much of a future working together. Nicole A. says she will campaign nicely, but if that doesn’t work she’s going to “blow shit up” and get “ruthless.” That’s a wrap for tonight!