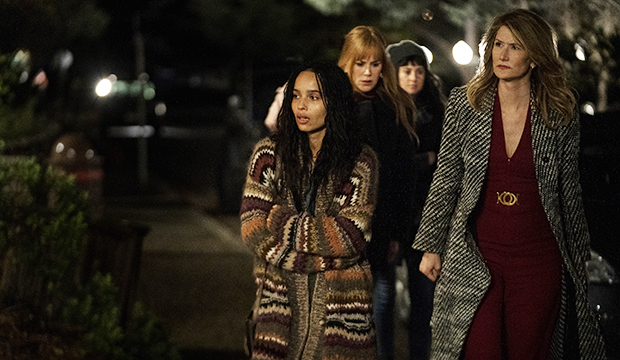 If you’re dying for a third season of “Big Little Lies,” well, you’ll be waiting for a very long time.

“There isn’t really [any discussion of a third season],” Nicole Kidman shared at Wednesday’s Television Critics Association winter press tour for her new HBO limited series “The Undoing,” which she’s also executive-producing with “Big Little Lies” scribe/executive producer David E. Kelley. “We’ve been so focused on this. We would love to, but there are ideas that are further on down the track.”

The Oscar and Emmy winner also cited the cast’s busy schedules as a reason why a third installment might be a long way off. “I mean, you look at Laura [Dern] — I don’t think we’d ever get Laura back,” she joked, referring to Dern’s big 2019 with “Marriage Story,” for which she received an Oscar nomination, and “Little Women.” “She’s working in so many different things right now. It’s been extraordinary. Zoe [Kravitz]’s gone on … to Catwoman [in the upcoming ‘The Batman’]. So I think everyone’s working in incredibly good places, which is a lovely thing to have come out of that show. Hopefully we can all collide again at some point.”

SEE ‘Big Little Lies’ got blanked in the individual SAG Awards categories, but don’t count it out for drama ensemble

“Big Little Lies,” of course, was designed as a limited series until its massive success in 2017 led to a public demand for a second season. Season 2, which aired last summer, got even more star-studded with the addition of Meryl Streep as Kidman’s mother-in-law. After dominating the awards circuit as a limited series, the sophomore installment, competing as a drama series, has thus far yielded Golden Globe nominations for drama series, Kidman and Streep, and a Screen Actors Guild Awards bid for drama ensemble.

Kidman and Kelley teamed up for “The Undoing,” in March 2018, before Season 2 of “Big Little Lies” even started filming. Based on the book “You Should Have Known” by Jean Hanff Korelitz, the series follows Grace Fraser (Kidman), a therapist whose life is going great until, as the title suggests, everything comes undone. Just before her first book is about to be published, someone close to her dies and her husband goes AWOL. Written by Kelley and directed by Emmy winner Susanne Bier (“The Night Manager”), “The Undoing” also stars Kidman’s fellow “Paddington” villain Hugh Grant as her husband and Noah Jupe as their son.

“This, hopefully, is juicy and fun,” Kidman said of the show. “You’re meant to sort of eat it up and I love how each episode ends in a particular way, which was beautifully crafted by these two [Kelley and Bier]. And that’s one of the beauties of television, and particularly a limited series, is that you can craft these so hopefully people go, ‘I want to watch the next one. And the other great thing is that HBO doesn’t let you watch the next one immediately, so you gotta wait, which is a tough thing in this day and age, to have to wait.”

“The Undoing” will premiere sometime in May on HBO.