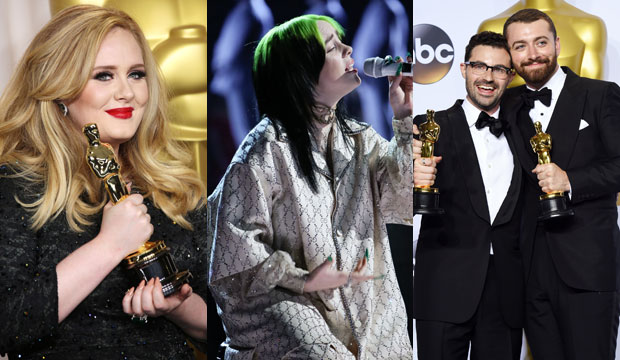 Billie Eilish swept the Grammys in historic fashion. By then it had already been announced that she would become the youngest artist ever to write and record the theme for a James Bond movie, “No Time to Die.” That means in a year’s time she could follow her Grammy breakthrough with an Oscar for Best Original Song, just like Adele and Sam Smith did. And on top of that she’d make history again as the youngest ever.

Adele had the golden touch in Hollywood in the 2010s. She swept the Grammys in 2012, winning six times for her blockbuster album “21,” including Album of the Year. Later that year she recorded the theme for the James Bond film “Skyfall,” winning the Oscar for it in 2013. In fact, “Skyfall” was the first Bond theme ever to win the Oscar.

Not to be outdone, Smith achieved the same feat. He won four Grammys in 2015 including Record of the Year (“Stay with Me”) and Best New Artist. That year he also recorded “The Writing’s on the Wall,” the theme from the Bond movie “Spectre,” resulting in a surprise Oscar win in 2016. That award had been expected to go to Lady Gaga and Diane Warren for “Til It Happens to You” from the documentary “The Hunting Ground.” The Oscars soon made it up to Gaga, but alas haven’t made it up to Warren yet.

Now it could be Eilish’s turn. She won all four general field categories at the Grammys, becoming the first to do so in a single night since Christopher Cross accomplished that feat in 1981, and guess what — Cross won an Oscar the very next year too, though not for Bond. He claimed Best Song for “Arthur’s Theme (Best That You Can Do)” from “Arthur.”

But Eilish wouldn’t just be following in those footsteps. She’d be blazing her own trail since winning an Oscar would be historic for her. After becoming the youngest Album of the Year Grammy winner of all time at age 18, she would be the youngest Oscar winner in any non-acting category next year at age 19. That record is currently held by Marketa Irglova, who won Best Song for “Falling Slowly” from “Once” (2007) when she was a few days shy of her 20th birthday. Eilish would be several months younger than that.

At that rate, maybe she’ll EGOT before she’s even old enough to have a celebratory drink.