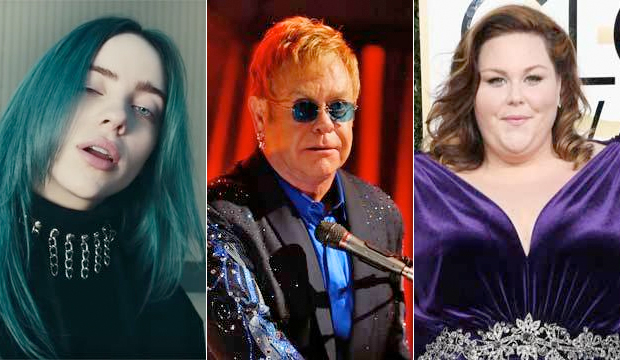 The 2020 Oscars felt a lot like the Grammys in that fans witnessed no less than eight performances throughout the bloated ceremony. Among this year’s musical entertainers were Janelle Monae, Eminem and Billie Eilish, plus those representing the Best Song nominations: Randy Newman (“Toy Story 4”), Elton John (“Rocketman”), Chrissy Metz (“Breakthrough”), Cynthia Erivo (“Harriet”) and Idina Menzel & Aurora (“Frozen II”). So who sang the best performance at the 92nd Academy Awards? Vote below in our poll.

The first performance of the night was Monae, who gave a special tribute to “Mister Rogers’ Neighborhood.” She removed her jacket and put on a trademark red sweater as she sang directly to the A-listers in the audience, including Tom Hanks. She also did an original song welcoming everyone to the biggest night of the year, complete with dancing jokers, little women, Dolemites and Nazis behind her to honor the year’s nominees. Midway through, Monae was joined by Billy Porter, who was looking fierce in his gold jacket.

Rapper Eminem’s appearance was a major surprise, but the audience seemed to love every moment of his reprise of his Oscar-winning song “Lose Yourself” from “8 Mile” (2002). TV viewers had a wholly difference experience though, as he was bleeped so many times we couldn’t truly achieve a full appreciation of his work.

Eilish, who just dominated the Grammy Awards, took the stage as the show was coming to a close to sing the In Memoriam segment. Introduced by Steven Spielberg, Eilish and her brother Finneas O’Connell performed a haunting, stripped-down version of “Yesterday” by The Beatles. Her voice was on point for the entire duration of the song, though we only got a few visual glimpses of Eilish (and her green hair) as the focus was rightly on all of the visionaries who passed away.

Here’s the order of all eight musical performances at the 2020 Oscars. Who blew you away the most?

Idina Menzel & Aurora and “Elsas” from around the world: “Into the Unknown” from “Frozen II”

Chrissy Metz: “I’m Standing with You” from “Breakthrough”

Eminem: “Lose Yourself” from “8 Mile”

Randy Newman: “I Can’t Let You Throw Yourself Away” from “Toy Story 4”

Cynthia Erivo: “Stand Up” from “Harriet”