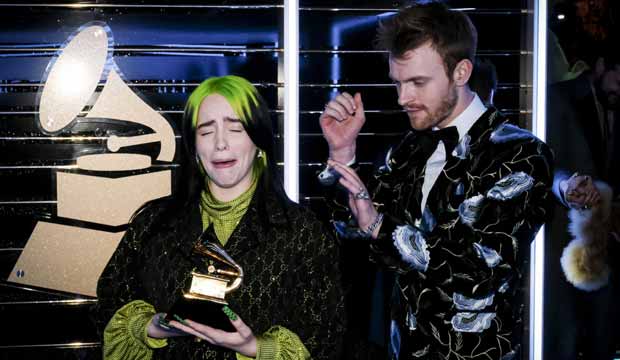 Billie Eilish won five Grammys on Sunday, January 26: Record of the Year and Song of the Year (“Bad Guy”), Album of the Year and Best Pop Album (“When We All Fall Asleep, Where Do We Go?”), and Best New Artist. That was a historic haul for the singer-songwriter, who just turned 18 last December. Here are the six ways she just made history.

1. She’s the youngest ever winner of Album of the Year

Taylor Swift held this record for a full decade: she was 20 when she won the top prize for “Fearless” in 2010, but Eilish’s victory at age 18 sets a new benchmark. How long will she hold onto this record?

2. She’s the second youngest Song of the Year winner

Her victory made her the second youngest Grammy-winning songwriter of all time. The only one younger was Lorde, who was 17 when she took home Song of the Year for “Royals” in 2014.

Again, she just missed this record. But in this case she wasn’t even that close. The youngest winner in this category remains country songbird LeAnn Rimes, who was 14 when she prevailed in 1997.

4. She’s the seventh youngest Grammy winner in ANY category

Only six people have ever won Grammys at a younger age. In addition to Lorde and Rimes, there were the three Peasall sisters, who were ages 8, 11 and 14 when they won Album of the Year as featured artists on the “O Brother, Where Art Thou?” soundtrack in 2002. And Latin singer Luis Miguel was 14 when he won his first Grammy in 1985.

SEE2020 Grammys best performances: Was the star of the show Demi Lovato, Camila Cabello, Tyler the Creator or …? [POLL]

5. She’s the second artist EVER to win all four general field categories in one year, and she’s the first woman

Before this weekend only one artist ever won Album, Record, Song and Best New Artist in one night: Christopher Cross, who in 1981 took home all four awards for his self-titled album and his single “Sailing.” That makes Eilish the first woman to accomplish this feat. Adele also won all four awards, but she didn’t do it all in one night. She won Best New Artist in 2009 and then came back to win Album, Record and Song in 2012, and then those three categories again in 2017.

6. She’s tied for second place as the most awarded female artist in one night

Actually, Beyonce (2004) and Adele (2017) won five in a single year too, so they not only hold the all-time record but are their own runners-up. So that’s a lot for Eilish to live up to, but she’s got plenty of time.