Billie Eilish recently released her title song from the upcoming James Bond movie “No Time to Die” (watch her Brit Awards performance of the song above). So we asked readers if they think she’s bound for Oscar in 2021. Most of them say she’ll be nominated, but they don’t agree on whether she’ll win. Scroll down to see our complete poll results at the bottom of this post.

SEEListen to Billie Eilish’s ‘No Time to Die’ theme song: Does it deserve an Oscar? [POLL]

The last two Bond themes in a row won the Oscar: Adele‘s “Skyfall” (2012) and Sam Smith‘s “Writing’s on the Wall” from “Spectre” (2015). But before Adele no Bond theme had ever won, so were those two wins aberrations or the start of a trend?

As luck would have it, Eilish herself just swept the Grammys, winning all of the top categories for her album “When We All Fall Asleep, Where Do We Go?” and its hit single “Bad Guy.” She even performed at the Oscars this year, singing The Beatles‘ “Yesterday” for the “In Memoriam” segment. She thought she “bombed” that performance, but she just may get another chance on the Oscars stage. 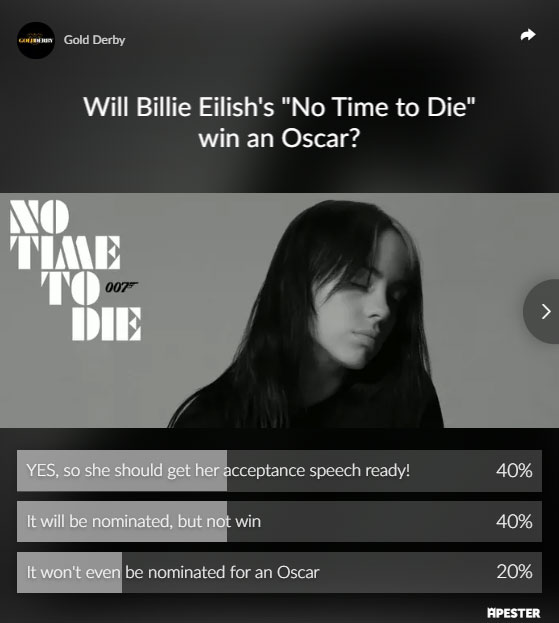