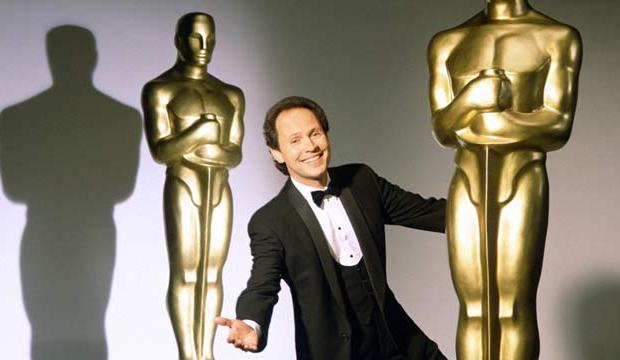 It was 30 years ago that Billy Crystal hosted the Academy Awards for the first time. And he hit it out of the park. He would go on to host the show eight times, most recently in 2012. He’s arguably the greatest living former Oscar emcee. And I hope that he returns someday. When I watch the show on Sunday, I’ll be thinking of the jokes that Crystal might have made.

And here they are.

1. Good evening and welcome to the Academy Awards. A three-and-a-half-hour TV event with Hollywood’s biggest stars – all dressed up and trying to look decades younger than they really are. It’s like “The Irishman,” only on ABC instead of Netflix.

2. “The Irishman” could become the first streaming film to win Best Picture. But some traditional voters don’t want that happen. They think movies should be experienced the old-fashioned way: on a watermarked DVD in the comfort of one’s own home.

3. “Joker” is up for 11 Academy Awards, more than any other film. That makes Joaquin Phoenix this year’s most-nominated clown not running for political office.

5. Another of tonight’s Best Picture nominees is the World War I epic “1917.” Two British soldiers are sent on a dangerous mission meant to save countless lives. And if they fail, it’s the UK’s biggest public relations disaster since Megxit.

6. One of the most talked about movies if the year has got to be “Parasite.” (Don’t worry – it can’t spread the coronavirus.) “Parasite” could become the first foreign language film to win the Best Picture Oscar. But the South Korean film does it have its detractors. Namely North Korea. Who knew that Kim Jong Un would be taking sides in the Oscar race? Two weeks ago, he hosted a special reception for “Jojo Rabbit.”

7. “Marriage Story” is up for six Academy Awards. Nominees Adam Driver and Scarlett Johansson are a couple going through a bitter divorce. It’s not surprising. Who thought Han Solo Jr. and Black Widow would make a good match? Even eharmony knows not to mix between the Star Wars and Marvel cinematic universes.

8. Greta Gerwig’s film adaptation of “Little Women” is also up for six awards. Nominees Saoirse Ronan and Florence Pugh play rival sisters in 19th century New England. In the film, Florence burns Saiorse’s manuscript in order to get back at her. But it could have been worse. Just ask her boyfriend in “Midsommar.”

9. There are a few first-time nominees tonight, like Antonio Banderas – here for “Pain and Glory.” Or glory and pain. That’s what happens when you say yes to both Almodóvar and “Dolittle.”

10. Tonight we welcome Sir Anthony Hopkins back to the Academy Awards. He won the Oscar for “The Silence of the Lambs” and he’s nominated again for “The Two Popes.” From Hannibal Lecter to the Vatican leader. Just think twice if he invites you to the Sistine Chapel for The Last Supper.