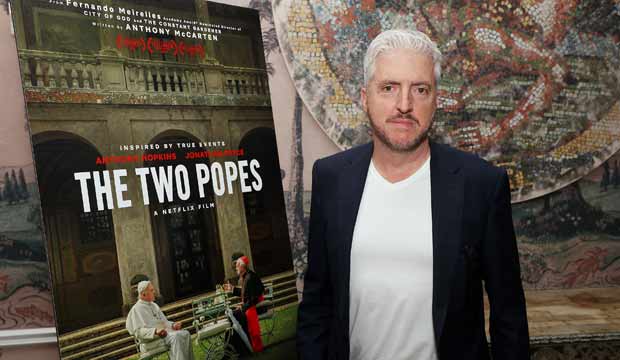 One of the least shocking Oscar nominations on Monday should have been for writer Anthony McCarten‘s adapted screenplay (based on his stage production) for Netflix’s “The Two Popes” and the matching set of lead and supporting bids for Jonathan Pryce as the future Pope Francis and Anthony Hopkins as the soon-to-retire Pope Benedict.

McCarten has been a secret wordsmith weapon at the Academy Awards with a knack for writing biopic scripts that seem to inevitably become the source of a male lead taking home a trophy. It started with 2014’s “The Theory of Everything” about astrophysicist Stephen Hawking, which led to his first adapted screenplay bid and a producer nomination for the Best Picture. As for the film’s star Eddie Redmayne, he ended up taking  home the Best Actor prize.

SEEBiopic screenwriter supreme Anthony McCarten: ‘I am drawn to projects that combine the intimate and the epic.”

Similarly, McCarten once again would compete as a producer of a 2017 Best Picture nominee, “Darkest Hour,” while star Gary Oldman won Best Actor  for his portrait of Winston Churchill. The third instance was when his script for “Bohemian Rhapsody” allowed Rami Malek win a lead trophy for his portrayal of Queen frontman Freddie Mercury.

McCarten spoke to Gold Derby when he attended the Middleburg Film Festival in Virginia back in October that he considered “The Two Popes,” in which the 21st century papal pair meet for the first time just as the Catholic Church is mired in its sexual abuse scandal and Benedict is considering his resignation. He said he considered his latest truth-based story “an analog of society at large. The battle of the progressive position and the conservative … I thought it would be interesting to have a debate between a progressive and conservative to see if a middle ground cannot be found.”

Both Pryce, who has never been in the Oscar race before, and Hopkins, who won for his lead role as the diabolical Hannibal Lecter in 1991’s “The Silence of the Lambs.”  He also competed as a headliner for 1993’s “Remains of the Day” and 1995’s “Nixon” as well as supporting for 1997’s “Amistead.”

One of the joys of “The Two Popes” is the humor shared by the two pontiffs as the two men of the cloth, one rather rigid and the other open-minded, somehow find common ground.  “I wouldn’t classify it as a comedy,” says the McCarten, “But I try to be lifelike … there’s got to be humor in there if it portends to be lifelike. Anytime two people get together, there’s usually an attempt at humor because that is how you do the basic transaction.”

We will know come February 9 when the Oscar ceremony airs on ABC, whether McCarten still has his magic touch and whether the voters still for his based on real-life stories.

LGBTQ characters nominated at the Oscars: Who was the first such Best Supporting Actress nominee in 1969?

LGBTQ characters nominated at the Oscars: Who was the first such Best Actor nominee in 1972?