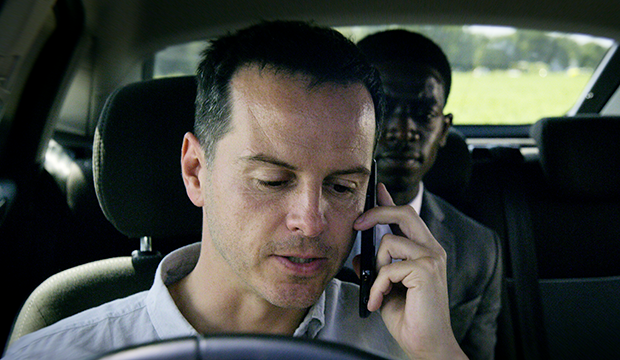 “Black Mirror’s” Emmy journey this season has had more twists than a “Black Mirror” episode. After getting permission to stay in the Best TV Movie category, despite its submission “Smithereens” being five minutes short of the new 75-minute requirement, the show was shunted to drama last week. That means instead of the limited/TV movie acting races, “Black Mirror’s” Season 5 stars can now choose to enter in drama lead, supporting or guest. And if any of them or Netflix are torn, take it from us: Go guest.

Current Emmy rules stipulate that performers who appear in less than 50 percent of a show’s season are eligible to compete in guest, but are not required to, so they can pick whatever category they want (Amazon’s “Modern Love” has taken advantage of this, splitting its cast between comedy supporting and guest). But to put it bluntly, guest is arguably where all “Black Mirror” actors belong. The show is an anthology series with a different cast every episode. Consisting of three episodes, Season 5 featured Anthony Mackie, Yahya Abdul-Mateen II, Nicole Beharie, Pom Klementieff and Ludi Lin in “Striking Vipers”; Andrew Scott, Damson Idris, Amanda Drew and Topher Grace in the aforementioned “Smithereens”; and Miley Cyrus, Angourie Rice, Madison Davenport and Susan Pourfar in “Rachel, Jack and Ashley Too.” These people (and all “Black Mirror” actors before them) are the stars of their respective episodes, but they’re not the stars of the show.

This is no different from “Saturday Night Live” hosts competing in guest — they, too, drop by for one episode and then bounce — or performers making a one-off appearance on a regular series with continuous storylines (like 2018 Best Comedy Guest Actor champ Katt Williams in “Atlanta’s” “Alligator Man”). You’d never consider any of these people leads of their winning shows even if they dominate their submitted episodes. And unlike recurring guest stars on regular series, “Black Mirror” stars are one-and-done for the season, so you wouldn’t mistake them for supporting players either. Or at least you’d hope voters wouldn’t.

SEE Andrew Scott: Hot Priest could get his Emmy revenge with ‘Black Mirror’ after his egregious ‘Fleabag’ snub

The TV academy has allowed obvious guest stars to compete against series regulars before to hilariously awkward effect. Before the guest categories were established in 1986, Ruth Gordon won Best Comedy Actress in 1979 for her one-episode appearance on “Taxi”… because she was Ruth Gordon? She beat actual series leads Katherine Helmond (“Soap”), Linda Lavin (“Alice”), Jean Stapleton (“All in the Family”) and Isabel Sanford (“The Jeffersons”), all of whom put in work on at least 22 episodes of television that season. Carol Kane won the same way in 1982 for her guest turn on “Taxi,” among other cases.

The worst was in 1992 when, for that year only, the guest categories were eliminated, and guest stars were forced to compete in lead and supporting. That led to Christopher Lloyd triumphing in Best Drama Actor for his one-episode appearance on “Road to Avonlea” over full-season work from Sam Waterston (“I’ll Fly Away”), Scott Bakula (“Quantum Leap”) and Rob Morrow (“Northern Exposure”). The other nominees were Kirk Douglas (“Tales from the Crypt”) and Harrison Page (“Quantum Leap”), who were shortlisted for their one-episode turns. Yes, someone who appeared in one episode of a show was nominated against the star of said show who was in all 22 episodes. Over in Best Drama Supporting Actress, Valerie Mahaffey (“Northern Exposure”) won for her three-episode stint over series regular Cynthia Geary.

It’s awkward all around, and Netflix has been side-eyed for entering — and winning — Best TV Movie the past three years with standalone “Black Mirror” episodes. Established last year, the 75-minute runtime rule was widely considered a response to “Black Mirror’s” (and before it, “Sherlock’s”) savvy but legal rule-bending, so it was a big fat “WTF?!” when the 70-minute “Smithereens” was (temporarily) approved as a TV movie.

“Black Mirror” also stands a better chance at reaping guest nominations than it would in lead or supporting or would’ve in limited/TV movie, where there is far more competition these days compared to nearly 30 years ago. Just two performers, Jesse Plemons (“USS Callister”) in lead and Letitia Wright (“Black Museum”) in supporting in 2018, have earned acting bids in the limited/TV movie categories. “Black Mirror” also just needs to look at “The Twilight Zone,” another anthology series that submits in drama, for reassurance: It received a Best Drama Guest Actor nomination for Kumail Nanjiani last year.

And not to look too far ahead, but “Black Mirror” is win competitive in drama guest actor with Andrew Scott, who headlines “Smithereens” as a deeply disturbed and disturbing rideshare driver. (Ironically, Scott is entered in supporting for “Modern Love.”) He was shockingly snubbed in comedy supporting actor last year for “Fleabag” even though his Hot Priest was a major part of why the second season exploded like it did. Bradley Whitford, who won drama guest actor for “The Handmaid’s Tale,” was very upset about it. Scott, who also has “1917” under his belt, has since bagged a Golden Globe nomination, a Critics’ Choice Award win, and most importantly, a Screen Actors Guild Award bid for “Fleabag” in the single comedy actor category, proving that his fellow actors are very much there for him and he may enough goodwill to cash in on that Emmy IOU.

And then there’s the fact that voters can be, uh, well, casual when selecting/name-checking guest winners sometimes. Margo Martindale (“The Americans”) won for sipping coffee for a hot literal minute in 2016, and Cherry Jones herself was stunned last year when she prevailed for her blink-and-miss-it appearance in her orphaned episode of “The Handmaid’s Tale.” Backstage, Jones lamented that Phylicia Rashad (“This Is Us”) and Cicely Tyson (“How to Get Away with Murder”) didn’t win.

Prior to the new ruling, Scott was in sixth place in our limited/TV movie actor odds. While the guest categories are not in the predictions center yet, you could probably bet on him being in our top six if that’s where he winds up.