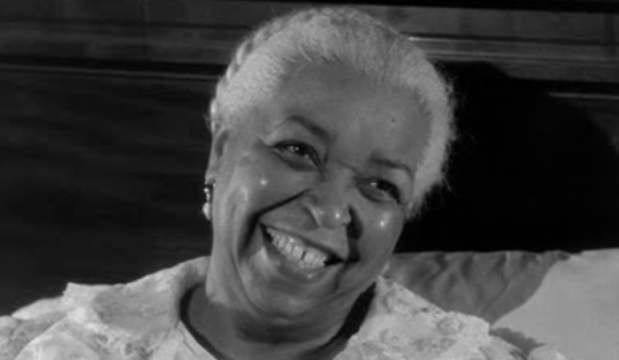 Black Americans saw very little representation of their lives and culture on TV during the 1950s. The only mainstay was Eddie Anderson, who played Jack Benny’s sardonic valet Rochester on CBS’ “The Jack Benny Program.” In 1937, he’d became the first Black performer to be a regular on the radio version of the beloved comedy series and played Rochester on television from 1950-65. Terry Carter played Pvt. Sugie Sugerman for 98 episodes of CBS’ Emmy Award-winning “The Phil Silvers Show.’ And Black singers and performers would occasionally appear on various musical-variety series.

Pianist Hazel Scott was given her own summer series “The Hazel Scott Show” on DuMont in 1950. But she was soon named as a Communist by “Red Channels”. Though she denied the charges, the series couldn’t attract a sponsor and was history after four episodes. Likewise, NBC’s 1957-58 “The Nat King Cole Show” couldn’t find a national sponsor and was cancelled after 18 months

But as the demonstrations for Civil Rights increased and the voices of Black Americans were finally being heard, television slowly began to change. Harry Belafonte became the first Black man to win an Emmy for his 1959 CBS special “Tonight with Belafonte.”

CBS’ popular 1960s drama series “Route 66” starred Martin Milner as Tod Stiles and George Maharis as Buz Murdock, two young drifters traveling the U.S. in their Corvette.  The third episode of season 2, “Goodnight Sweet Blues,” aired on October 6, 1961 and showcased the legendary singer/actress Ethel Waters, who became the first Black woman to be nominated for an acting Emmy. Walters was the second Black actress to receive a supporting Oscar nomination for 1949’s “Pinky” and she earned strong reviews for the 1950 Broadway and 1952 film versions of “The Member of the Wedding.”

Even nearly six decades after it first aired, “Goodnight Sweet Blues,’ which Waters sings, still packs an emotional punch. Tod and Buz literally run into Walter’s Jennie when her car cuts them off near Pittsburgh. She has had a heart attack and asks them for help. When she’s told she has little time to live, the former singer asks the duo to find the members of her old jazz group and bring them to her house for one last concert. The only caveat is that they have to be there within in a week.

Not only does Waters give a sweet, warm-hearted hug of a performance as Jennie the installment also features some great jazz musicians including drummer Jo Jones, tenor saxophonist Coleman Hawkins and trumpet player Roy Eldridge. Frederick O’Neal, who founded the American Negro Theater, and Bill Gunn, who was also a playwright and film director, also play part of Jennie’s old group.

The episode also showcases the great Juano Hernandez, who earned in a Golden Globe nomination for New Star of the Year for 1949’s “Intruder in the Dust” and gave memorable performances in 1950’s “Young Man with a Horn” and “The Breaking Point.” He’s absolutely heartbreaking as King Loomis, a member of the group who lost everything due to alcoholism and is working as a shoeshine guy in the park. He is too embarrassed to see Jennie because he fears he’s lost his “lip, “ but he changes his mind. And their reunion is powerful.

Former UCLA Film & Television archivist Dan Einstein told me in a 2015 L.A. Times interview that “I think with the arrival of the Kennedy administration in the early 1960s, there was a lot of liberal television — ‘The Defenders,’ ‘East Side/West Side’ — that were dealing with real problems, societal problems and doing it in a very kind of humanistic way.”

The CBS’ 1963-1964 series “East Side/West Side” starred George C. Scott as a New York City social worker and Cicely Tyson as his secretary, the first time a Black actress starred in a dramatic series. The seventh episode, “Who Do you Kill?,” earned Emmy nominations for Diana Sands and James Earl Jones, as well as writer Arnold Perl with Tom Gries winning an Emmy for his taut direction.

Sands and Jones are moving as a young Black couple with a baby boy who are living in New York City slum.  He’s frustrated and angry he can only get menial jobs and feels guilty that his wife must work in a sleazy bar. And complaints to their slumlord about rats in their apartment go unheeded. And tragically, their baby is bitten by a rodent while sleeping in his crib. The scene in which Jones’ holds his lifeless baby trying hopelessly to get a taxi on the mean streets to New York is a gut punch.  And unfortunately, Black men still find it difficult to get a taxi in New York.

It was too much of a gut punch for several affiliates in the South that refused to air the episode. “’Who Do You Kill?,’ said UCLA TV archivist Mark Quigley in 2015, “might be the most significant socially themed dramatic program to air in the 1960s. It dared to confront white viewers with this troubling, honest look at urban poverty and the human cost of racism from the point of view of African Americans. What James Earl Jones and Diana Sands bring to that episode can’t be overrated. They both give really powerful performances.”