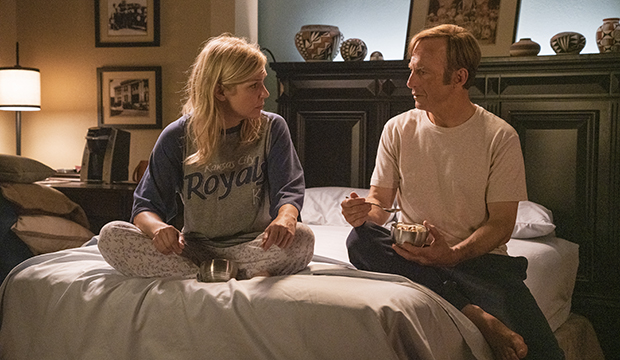 Two Emmy-snubbed performers have taken to Twitter to console each other over their cruel omissions, and “Better Call Saul” fans can’t get enough.

“Wish Rhea had been nominated, she has just killed it the past two seasons on BCS,” Bob Odenkirk tweeted after the two of them came up short in the Emmy nominations. Rhea Seehorn then responded, “Well, I wish YOU had been nominated! But, YES, you better believe we’re all proud of our #BCS nominations.” Lead actor Odenkirk and supporting player Jonathan Banks had been nominated for every season of this “Breaking Bad” spin-off, so it’s especially strange to see them both kicked out this year. Seehorn was looking for her first Emmy bid.

Well, I wish YOU had been nominated! But, YES, you better believe we’re all proud of our #BCS nominations for Best Drama, writing, music, sound, & the great @quiethandfilms !!!
(& thanks for the kind words, my pal. ❤️) https://t.co/exlKLJCbYk

Odenkirk also gave a shout-out to “the GREAT” Giancarlo Esposito, who it turns out is the only acting nominee from Season 5 of the long-running AMC series. This marks Esposito’s second supporting bid for “BCS,” though he was first nominated for “BB” in 2012 for playing the same character. Amazingly, Esposito is a double nominee in 2020 as he also contends for “The Mandalorian” as a guest star.

Seehorn’s role as ambitious attorney Kim Wexler increased dramatically in “Better Call Saul” Season 5. Not only did her professional life drive much of the narrative, but her personal story with Jimmy McGill/Saul Goodman (Odenkirk) reached new heights as the couple got married. In the fan-favorite episode “Bagman,” Kim’s desperation to find her missing lover even resulted in her coming face-to-face with drug kingpin Lalo (Tony Dalton) for the first time.

Odenkirk is a two-time Emmy winner for “The Ben Stiller Show” and “Saturday Night Live,” but he has yet to win for acting. Many awards pundits thought this could finally be the year he prevailed for his fan-favorite role on “Better Call Saul.” Better luck next time?