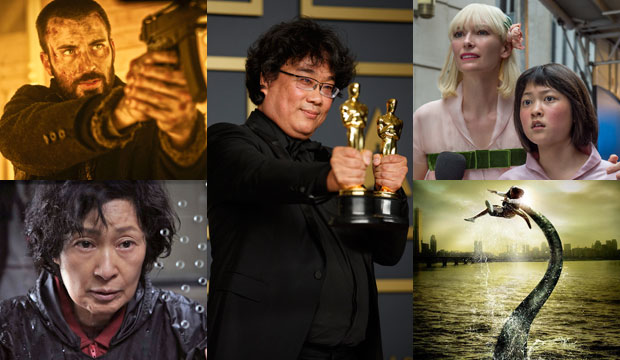 Bong Joon Ho became an overnight Hollywood sensation when he won Best Picture, Best Director and Best Original Screenplay Oscars for “Parasite,” his satirical thriller about a poor family that infiltrates a wealthy household before things go dangerously awry. And by overnight, of course, I mean after more than 20 years of making movies. He has become a household name thanks to his historic victories over the weekend, but if you’re not familiar with his earlier work, you can watch it all right now. Scroll down to find out how.

“Parasite” is already available to rent or buy on Redbox, Apple, Google, Fandango and more, and it’s going to expand its theatrical run following its Oscars windfall. But his first feature film was 20 years ago: “Barking Dogs Never Bite” (2000), in which a college lecturer takes drastic action to quiet a noisy dog. He was 31 when that film was released; it played at a few international film festivals, but it didn’t make a huge international impact.

He followed that with his crime drama “Memories of Murder” (2003), in which two detectives investigate a series of slayings inspired by the case of a real-life serial killer. That was a breakthrough for the filmmaker, who won Best Film and Best Director at Korea’s Grand Bell Awards. That was also his first collaboration with actor Song Kang Ho, who won the Grand Bell for Best Actor and went on to work with him three more times, including in “Parasite.”

Bong and Song collaborated again on the monster movie “The Host” (2006), which screened at the Cannes Film Festival and became one of the most successful films in the history of the South Korean box office. But Bong’s next film, “Mother” (2009), was the one that arguably got him closest to Oscar before “Parasite.” That thriller about a woman trying to clear her son’s name when he’s suspected of murder was South Korea’s official Oscar entry for Best Foreign Language Film (now known as Best International Feature Film). It didn’t make the cut, but it was nominated at the Independent Spirit Awards (not to mention the Gold Derby Awards) and its star Kim Hye-ja won Best Actress from the Los Angeles Film Critics Association.

Then he made his first English-language film, “Snowpiercer” (2013), a post-apocalyptic thriller about a socially stratified train moving through an icy wasteland. It was critically acclaimed and earned three Critics’ Choice nominations including Best Supporting Actress for Tilda Swinton. But alas, no Oscar nominations for that one either. And right before “Parasite” he brought his talents to Netflix with “Okja” (2017) his animal rights parable about a young girl trying to save her genetically modified super pig from slaughter. It competed for the Palme d’Or at Cannes, and its visual effects made the long list at the Oscars, but it didn’t ultimately earn a nomination.

SEEOscars live blog 2020: ‘Parasite’ is the night’s big winner with 4 including Best Picture in historic victory!

You can watch all of those films by following the links below. How do they compare to “Parasite”?

“The Host” (2006) — Streams on Tubi (free with ads), available to rent or buy on Apple, Google, Vudu, Microsoft, YouTube