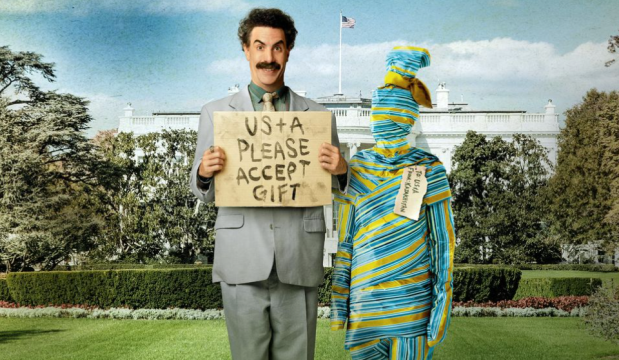 When he made the 2006 blockbuster Borat,” Sacha Baron Cohen never thought the ribald mockumentary would become part of the pop culture landscape. “Myself and other writers felt it was going to be an incredibly obscure, niche movie,” he noted in a recent Zoom conversation with Variety’s Jenelle Riley and his “Borat: Subsequent Moviefilm” breakout star Maria Bakalova.

“It was an anti-Semitic journalist character from a central Asian country that we’d essentially made up,” Baron Cohen explained. “It had a scene of two men fighting naked. We just assumed that nobody would watch it. Our friends would love it and some of our contemporary would dig it. Then it ended up being a huge hit. ‘Borat’ became incredibly well-known. Then we thought it’s impossible to ever do a sequel. So, I kind of abandoned it.”

Until Trump was elected. Baron Cohen felt very frustrated with his election. “I felt I had to do something. I had made a TV show call ‘Who is America?’ which was me going undercover again for the first time since the movie I made with ‘Bruno.”

During the 2018 mid-term elections, Jimmy Kimmel invited him on his show. Baron Cohen decided to bring Borat back – “for kind of a five-minute section to see whether it was possible. I realized Borat was a way of getting Trump supporters to really open up, as if they weren’t open up enough. Because Borat is really a kind of slightly more extreme version of Trump-he’s 20% more misogynistic; he’s 20% more enthusiastic of white supremacists and he’s 20% more into caging children. By putting these people next to somebody who’s more extreme than themselves, they would open up and say what they really felt. “

Baron Cohen, who is considered a contender for an Oscar for his dramatic turn as Abbie Hoffman in the “The Trial of the Chicago 7,” and his writers were working on another film when he decided to stop the project and move to “Borat.” “I was terrified about what would happen if Trump won again,” Baron Cohen said.  “I was very aware that as an actor and as a comedian, there was not much I could do. Not many people would listen to me, but the one thing I could do was bring back my most popular character and make a really funny film and hope that some of the fans out go out and vote against Trump.”

This time around, a disgraced Borat has completed his hard labor sentence for bringing disgrace to Kazakhstan when he’s called into the office of the propaganda minister who wants him to return to the U.S to make friends with Trump. And to gain Trump’s respect he is assigned to accompany the star Johnny the Monkey to the U.S. and give him to Mike Pence. But when his 15-year-old near feral daughter Tutar (Bakalova) eats the chimp on the trip, Borat offers her as a child bride to Pence and then to Rudy Giuliani.

(Neither Baron Cohen or Bakalova spill the beans during the conversation on the much-discussed sequence where Tutar interviews the former Mayor of New York and Trump’s personal attorney in a hotel room.)

The Amazon Prime production is surprisingly sweet thanks to the chemistry between Baron Cohen and the young Bulgarian actress Bakalova as the scene-stealing Tutar. As their relationship grows during their journey in the U.S., Borat goes from misogynistic to a feminist.

Baron Cohen knew it would be difficult to find the perfect Tutar. “Myself and the rest of the team said ‘let’s not commit to the movie until we found Tutar. Let’s not have a start date.’ We knew we would only make the movie if we could deliver it by the election. We knew that we could only make it if there was an actor who was capable of playing 15, seducing one of Trump’s inner circle, being brave enough to be in these real situations, which were sometimes dangerous.”

Hundreds of young actresses went through the interview process.  “I literally flew around the world,” said Baron Cohen. I wanted to ensure that I had that chemistry, that complicity with the person. “ Then he met a girl named Maria.

“We kind of put Maria through the ringer,” he recalled. “I mean she had audition after audition. We put her in situations with real people. It was in a kind of a controlled environment. We did one audition where we went through the scene where Tutar splilts up from her father and says ‘No, I’m leaving you.’ She delivered the lines and in the middle of the scene, I felt like I was going to start crying. I stopped the scene because obviously being an Englishman, I never wanted to cry in front of anyone. I just went over to the director and was like ‘This is the one.’”

Ironically, Bakalova didn’t know exactly for what she was auditioning. “It was confidential,” she said. “But I was quite curious.  Is this a real audition? I will always be thankful and grateful fon Sacha and to the team…. So many young girls and boys from Bulgaria and Eastern Europe have been texting me that their hopes have never been stronger, that dreams actually can come true. This is probably the biggest gift I’m going to receive from this-bringing hope to people. It’s incredible.”

Bakalova would get nervous during the production. “There were many times where Maria would call up because sometimes  we were shooting during the pandemic,” he said. “We’d FaceTime and she’s said I’m terrified. I would say that’s good. Use that adrenaline. You’re going to use that fear in the scenes now and that’s going to give you incredible energy and focus. So, don’t try to calm yourself down, just know that your body is preparing for what you’re about to deal with.”

One of the funniest sequences in the movie is when Borat is in a lockdown house with the conspiracy theorists Jim and Jerry for five days. Baron Cohen had to do a lot of preparation before he arrived. “You’ve got to be aware of those five days. They could ask you any question about your family life, your wife. How did you get here? Where have you been staying? You need to have an entire backstory. “

And sometimes you need to change the back story. “With Jim and Jerry, we changed my country of origin to Belarus about an hour before I went in because we were concerned that they might know about Kazakhstan. So, for that hour I’m trying to ingest everything I can about Belarusian politics, about society, cultural events.” He admitted when he was in character for five days, Baron Cohen discovered it was “really hard to get out of character. I remember going to my bedroom the first night and actually found it difficult cleaning my teeth. I was like ‘What is going on?’ I realized I was still Borat.”