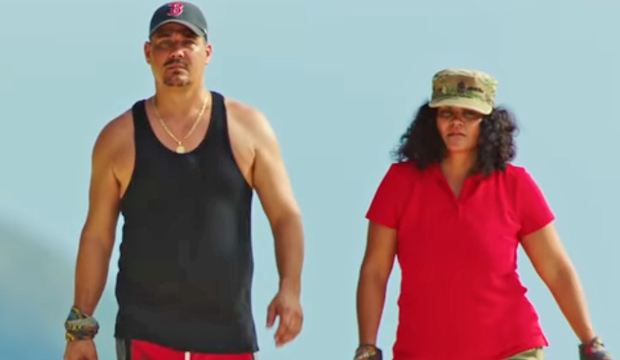 Rob Mariano has broken his silence on the drama that’s unfolded ahead of the “Survivor: Winners at War” debut. Monday night at the Season 40 red carpet premiere at ArcLight Hollywood, moderator Dalton Ross (EW) asked Boston Rob about Sandra Diaz-Twine‘s comment that she felt “betrayed” in regards to him failing to mention he’d appear in the new season. For the record, Sandra did inform him of her plans to compete in “Winners at War” when they lived together for 36 days in “Island of the Idols,” but Rob kept mum about returning with his wife Amber Mariano. “I come from the old school mentality that the game starts when Jeff says go,” Rob explained in his defense.

SEE‘Survivor at 40’ retrospective: Which flashback moment was your favorite? [POLL]

The winner of “Survivor: Redemption Island” continued on, “There’s a little bit of this notion of pre-game alliance that feels dirty to me. I don’t like it. I understand that people do it now and it’s part of the game and the game’s evolved. But I’ve always been of the mindset that the game starts when Jeff says go. You don’t know how the teams are gonna be divided. You don’t know what the twist may or may not be. And why am I gonna pigeonhole myself into a position that could handcuff me later?”

Rob admitted there was another reason he didn’t tell the Queen about his decision to return to the island. “Sandra is a very accomplished player,” he stated flatly. “She’s the only one, up until this season so far that we’ve seen, that has won the game twice. And I know that that information is power. I said it over and over on the Island of the Idols. So why am I gonna give her information that could possibly hurt my game? That was it.”

“It wasn’t anything personal,” Rob concluded. “And for the record, I called no one before this game started — not Tyson Apostol. The only person that I had discussions about Season 40 with was my wife.” Amber confirmed it was “100% true” Rob didn’t talk game prior to the island with anybody else, as the idea of creating pre-alliances also felt “dirty” to her.

Host Jeff Probst chimed in that he completely understood why Sandra felt betrayed. “It was such an intimate relationship [on Season 39] that you guys were truly producing an element of a show together,” he revealed. “But I will also say, Sandra, that I remember him telling me — because pre-game we talk to every player — and he goes, ‘I’m not gonna tell her.’ I remember saying to him, ‘Man, that’s risky.’ And he goes, ‘But I just don’t know yet. I don’t know what’s the right thing to do.’ It never was a calculated move against you.”

Sandra then confessed that Boston Rob was her favorite “Survivor” player and that she “always clicked” with him. “We had that mouth,” she said. “We pop off. Yes, he’s Italian, I’m Puerto Rican. He’s from Boston, I’m from Connecticut. But like, we get it. There was always something about Boston Rob that I aspired to be like him and play with him.”

“Mutual respect,” Rob responded in kind. Will Sandra become the show’s only three-time winner after previously claiming victory in “Survivor: Pearl Islands” and “Survivor: Heroes vs. Villains”? Or will one of the other returning champs earn the $2 million prize instead? Find out when “Survivor: Winners at War” premieres Wednesday, February 12 on CBS.